Ameland and the Linocut print

Recently I discovered some of my favourite places on the North-sea island of  Ameland appearing in contemporary linocut prints. I can say that I'm very lucky having lived on the island at one time. These prints are made by Dutch grafic artist and retired drawing teacher Nies den Engelsen (1945) who is also a frequent and very dedicated visitor to the island. His approach to linocut printing is a straight forward, simple and non romantical one.

In the 17th and 18th century the island of Ameland was the centre of Spitsbergen and polarsea whaling and the focus of many expeditions. The many preserved captains (“commanders”) houses, build from rich profits from the hunt and trading attributing much to the wonderful authentic and historic atmosphere on the island. 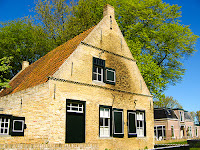 Surrounded by beaches, dunes and a bewildering tidal sea mysteriously falling dry every twelve hours, the endless horizon and the exuberant marine and bird life are unequaled and truly unforgettable. The Wadden-sea, the shallow tidal-sea surrounding the strip of islands from the Netherlands through Northern Germany to Denmark was awarded World Heritage  status in 2010.
It is most important as a nursery to uncountable species of marine life, Northsea fish, seals, birds and of vital importance to all Northern Europes migrating birds who pass by the millions every spring and fall. 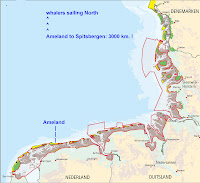 Native islander Tames Oud (1895-1945), painter and linocut printer, left the island for Brussels in 1914 to become a celebrated artist. Besides paintings in oil he created also some linocut prints with subjects from childhood memories. Showing lovingly and in a very distinct and personal style village people and island life.

Some of his prints showing the age old, very local and mysterious fête of St. Nicolaas (Sûnneklaas).

When, during two evenings in the first week of December from sunset to midnight women are not allowed outdoors and all Island men over 16 ("of age") wander disguised and masked in groups from door to door checking curfew and “forcing” the women to dance with them on music and traditional hot drinks.


These two examples of prints depicting the cold and haunting atmosphere of an island community in winters' isolation in that particular week. Halloween may be the closest tradition to compare with.

This emotional drawing (below) by illustrator and bookcover artist Reint de Jonge (1931-1993) showing the brute power and brave heroism that goes with launching the lifeboat. Drawn, pulled and launched by 10 trained island working horses, farmers and villagers team up and man the now motorised lifeboat saving the lifes of hundreds of sailors in distress. In august 1979 eight horses tragically drowned launching the boat. An island catastrophe that made world news.


See more of this "strange land and its deprived people living on man-made mounts mysteriously rising from misty seas two times every day, like shipwrecked". After: Gaius Plinius Secundus (23-79 AD) or Pliny the Elder, who stood on Frisian shores around 50 AD, writing his eyewhitness account. Not used to the tides he was undecisive wether he saw "the seafloor rising or the land sinking into the seas". Storing rainwater from thatched roofs was also something the civilized Roman, used to running water and central heating, found very savage. He left this "Godforsaken country" reporting he saw no other use to the Empire for the land and its inhabitants other than forced labour and taxes. The fierce and proud Frisians beating the Romans later escaping slavery and Roman suppression. Plinius died in action standing on the beach whilst making his eye-whitness report of exploding Mt. Vesuvius in 79 AD.