Avis Chitwood
(1894-1994)
&
Margaret Evelyn Whittemore
(1897-1983)
&
Mary Huntoon
(1896-1970)
American (Kansas) Printmakers.
What have the two first women and Mary Huntoon in common besides these two lovely prints I stumbled upon? An educated guess is that Margaret did the birds and Avis the flowers. I will show you why. In this and next two postings to come. Maybe the result is not totally "Japanese" (using opaque paint and heavy paper) but the ladies were definitly inspired by Japonisme. The joy of designing and printing them together in a joint venture is jumping of the paper. Follow me on a trail back to Edinburgh and Paris. 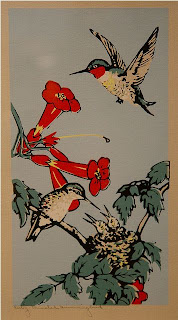 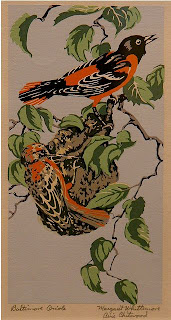 Baltimore oriole.
To begin with both women lived to a high age and stayed creatively active , both were American. Both lived most of their long lifes in Tupeka, Kansas. Both knew the same people. Both were influenced and taught by the same teacher. Both depicted in their solo careers simple subjects from their nearby environment and surroundings.
Avis concentrated mainly on plants and Margaret on birds, trees, buildings and illustrated books. Both have works collected by the same museums and are united in the same collections to this day. Were I found and borrowed many of the pictures I used to create this and the next two posting. Link in to their visitors galleries and find many more interesting examples of their and many other printers art work.

Both were active in their own studio's and in the privat studio of Mary Huntoon (1896-1970). She founded the Topeka Print Makers. They headquartered in her studio.

She did this wonderful drawing of three lady (friends, members?) sketching somewhere in the in 1930's. Maybe Avis and Margaret are even in it. 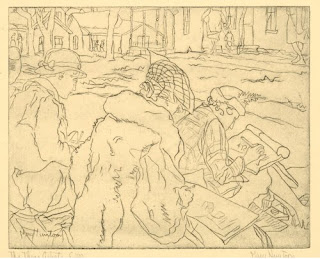 How good she was you can see in this small and deceivingly simple sketch of Brooklyn Bridge (below). I think she studied Arthur Wesly Dow's instructions on Notan very carefully. 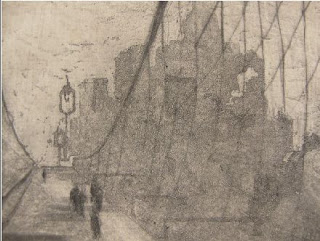 After studying with printer Joseph Pennell at the Art Students League in New York 1920-graduating 1923 and travelling to Paris and producing prints there for several years, Mary Huntoon returned 1930 to native Topeka to teach printmaking at the Arts Department of Washburn College (now Washburn University). The same school she graduated from 10 years before in 1920. As did Margaret Whittemore at her mothers school director Frances Dean-Whittemore, herself a graduate from the Art Institute in Chicago became art teacher and later director of Washburn College 1912-1929.

This is how Avis Chitwood (above about 1965) came to attend her printing classes with Mary Huntoon after a self educating career in painting and printing and running an Arts and Crafts shop in Topeka. 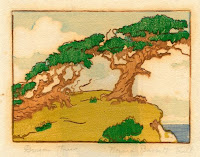 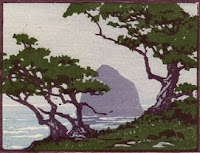 Educated in the same Chicago's Art Institute (1915-graduated 1918) she and her husband travelled to Europe from 1925 -1927 visiting France, England and Scotland meeting in the end the noted etcher Ernest Lumsden and his wife: Mabel Royds (1874-1941). They stayed a year at the Lumsden-Royd's studying and absorbing the latest printing techniques with transparent water-based inks from Mabel Royds. Mabel a pioneer in woodblock printing and influenced by Henri Toulouse Lautrec. Lumsden already very famous for his etchings. 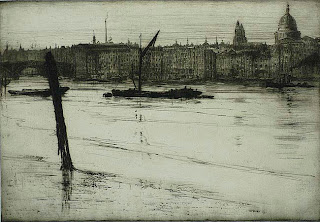 Mabel Royds was an appointed teacher in the Edinburgh School of Arts, together with colleague printer and head of the Applied Arts Department since 1910 John Edgar Platt (1886-1967). Platt was taught woodblock printing by Allan William Seaby (1867-1953). Seaby himself a pupil of Frank Morley Fletcher.

Frank Morley Fletcher (1866-1950) was director of the Edinburgh School of Art (1907-1923). Thus tying all important beginning of the XXth century Brittish woodblock printers together in Edinburgh. For further reading on these printers and the influences of Japanese printer Urushibara please follow the link to a recent post on Art and the Aesthete: http://www.clivechristy.com/2010/11/urushibara-and-frank-morley-fletcher.html

Fletcher later moved to California (US) and became director of the Santa Barbara Art School (1924-1930). Fletcher resigned as director in the spring of 1930 and eventually moved to Los Angeles where he continued to teach, paint, and exhibit. In the late 1930s his eyesight began to fail and his output became more sporadic. Wether he knew or met the Kansas Printers or Avis and Margaret I couldn't find evidence of. 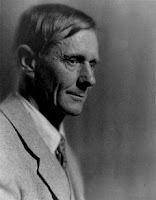 Many important American printers became involved and even paying members (annual fee $ 1,00) of the Kansas Print Makers: among them Steng Wengenroth, Frances Gearhart, William Seltzer Rice, Walter Joseph Philipps and Bertha Jacques. To incourage blockprinting and to the benefit of selling their prints. In the after Great Depression years incouraging a new public to buy Real Art at reasonable prices. Margaret Whittemore was invited to join in an early stage. The Kansas Print Makers Group ended in 1965.

Continuing the trail and history even further back: Frank Morley Fletcher was (also) taught by Fernand Cormond (1845-1924), most important historical painter of France, attending the Cormond school in Paris in1888. 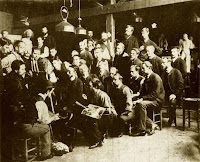 Class of 1885 of Fernand Cormond's school in Paris.

Before him Henri Toulouse-Lautrec and Vincent van Gogh took classes there. And there Frank Morley Fletcher, Godfather of all English woodblock printers, became interested in woodblock printing.

In 1889 the World Exhibition took place in Paris. Some 32.000.000 (!) visitors came to Paris over 6.000.000 by train alone. Among them most heads of European states and many contemporary important artists. The list is long. Whistler was there, Gauguin, van Gogh, Edvard Munch, Buffalo Bill Cody and many many others visited the pavillions 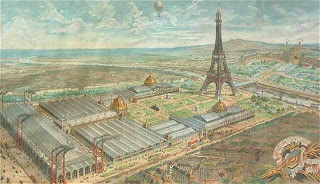 The World Fair was held on the grounds near the river Seine were the newly constructed Eifel Tower served as an entrance symbol, and again later in 1900. In 1909 all buildings were demolished and the grounds redesigned into the park as it now exists. 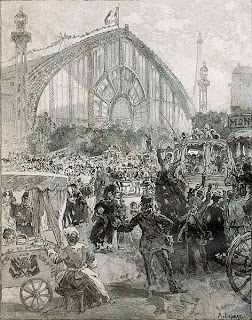 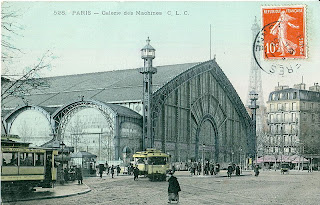 (Exactly the same spot, see the perspective, but the party over and the crowds gone)

To be continued soon with postings on the solo prints of both ladies: Margaret Whittemore and Avis Chitwood. 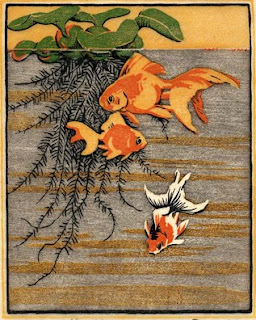 Returning one last time to the subject of the Aquarium world to share some very nice prints that are not very often shown.

Not many Western woodcut and linocut printers have taken the Aquarium world as a subject for their art. Luigi Rist (1888-1959) is an exception. 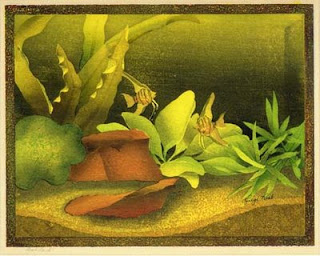 Aquarium with moonfish by Luigi Rist

Elisabeth Norton was also inspired by the aquarium or maybe just the goldfish in her fish tank. She made 3 !

On the other hand it is known that as a girl she was a frequent visitor of Chicago's Lincoln Park Zoo.

Later she became most famous and loved for her many dog and horse prints. 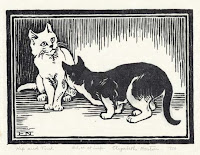 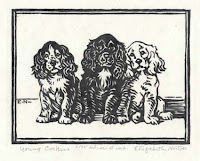 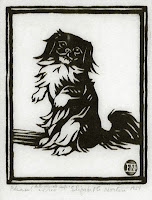 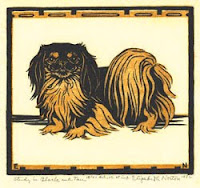 But she also printed the big cats, apes, parrots and elephants.

Leopard and elephants in Lincoln Park Zoo ,Chicago 1900-1910 that could have been the models for Elisabeths' later prints.

Most of her zoo animal prints signed and dated between 1920 and 1935 ans most probably she made them after sketches from her childhood visits to the Zoo in Chicago. 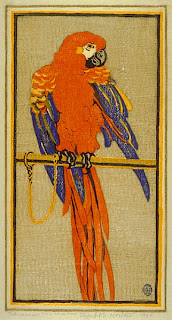 Domestic cats, chicken and ducks equally inspired her making prints. As did her surroundings in California where she lived until her death almost 100 years old !

Elisabeth Norton was born in Chicago 1887 and attended the AIC (Arts Institute of Chicago) in 1910 moved to New York and studied in the NAD (National Academy for Design) and entered the ASL (Arts Students League) to study further under impressionist painter and director Frank Vincent Dumond (1865-1951) and later in the 1896 founded Chase School, 2 years later, in 1896, renamed New York School of Art. Georgia O'Keefe and Norman Rockwell being two famous Dumond pupils.

In 1915 she travelled to San Francisco to attend the Panama Pacific International Exhibition and later returned to California in 1919 settling in Palo Alto. I have been searching for an inventory of the 1915 exhibition to see what she exhibited with but sofar without success.

She was a founding member of the Palo Alto Art Club and exhibited during her lifetime. Her works are included in most major collections in America and therefore her prints are not easily accessible or obtainable to mortal and collectors on a budget. 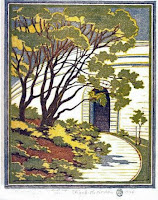 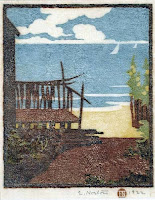 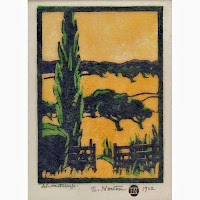 In the pictures of her printings I've found editions were mostly a 100. Priced, when auctioned or offered in galleries throughout the world, around the $500 for a small b&w and to a $1000 and upwards for a colored one. 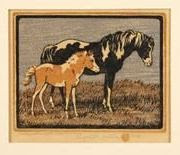 There is no book nor a catalogue on Elisabeth's career as a gifted printer with a love for animals and her nearby environment. The purpose of this Posting is to do Elisabeth Norton honor.

What began as a simple posting on 3 goldfish prints ended up in showing many of her prints together for the first time. I think. Because I have never found them together but collected them over a period of time and in many different places.

I am also convinced this posting isn't complete. I have borrowed pictures freely from art galleries, museum and auction catalogues. Accessible to everyone. If there are any objections using them in this context please let me know. 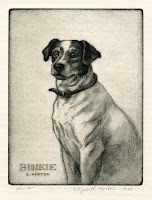 These two etching are also proof of her special talent and the love for what probably have been her companions during her long life. 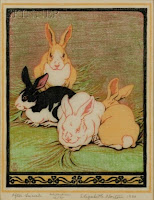 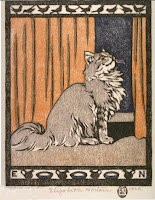 If you have others examples of prints by Elisabeth Norton and would like to share them please send me a notice allowing me to do a follow up in a second posting on her print work if more examples show up.

You are invited to leave a comment if you enjoyed reading this posting as I did making it. 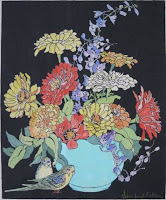 William Joseph Eastman
(1888-1950)
American Painter. And maker of one woodblock print.
Browsing old internet catalogues on a rainy day I stumbled over this linocut (said the catalogue) by William Joseph Eastman. In the John Hall-Thorpe style. But furnished with two budgies. I think it's great. It sold for $230. It is good I was far to late and not even there. To know of its existance and having a good scan is OK too. William Joseph was a productive painter in oil, much to the american taste because everything that comes on the market is sold. No Rembrand but nice enough paintings. No other printed evidence to be found. Was he not satisfied with the result or was the one just enough ? 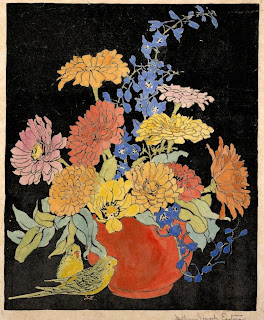 And then much later I stumbled over it again. A description in the Cleveland (Ohio, US) Museum catalogue, a color woodcut of a vase with marigolds with two budgerigars.

Maybe there are more examples of Williams' woodblock printing skills, I didn't find any so far. But he showed the world in this print he knew what he was doing. And could match even the specialists in this genre.

I Photoshopped the museum scan to make the blackground black again and revived colors just a wee bit.

As William Joseph played and experimented with colors, I guess he wouldn't mind too much.

Besides the many oil paintings, which are not really my cup of tea, I found this very nice little (9'' x 5,5'') qouache signed "Normandy" and dated 1946 (sold for $245). Surprisingly modern, very strong composition. Since my Photoshop was still running in just a few clicks I fumbled it into a holliday poster.

I am confident William will forgive my fooling around with his holliday souvenir. As he would have liked my sharing his art with you.
Geplaatst door Gerrie op 11:21 2 comments: