Fred Fredden Goldberg: a summing up.

Besides collecting woodblock prints the saving and storing of bits and pieces of information eventually and inevitably will lead to the revelation and unobscuring of obscured and forgotten printmakers. 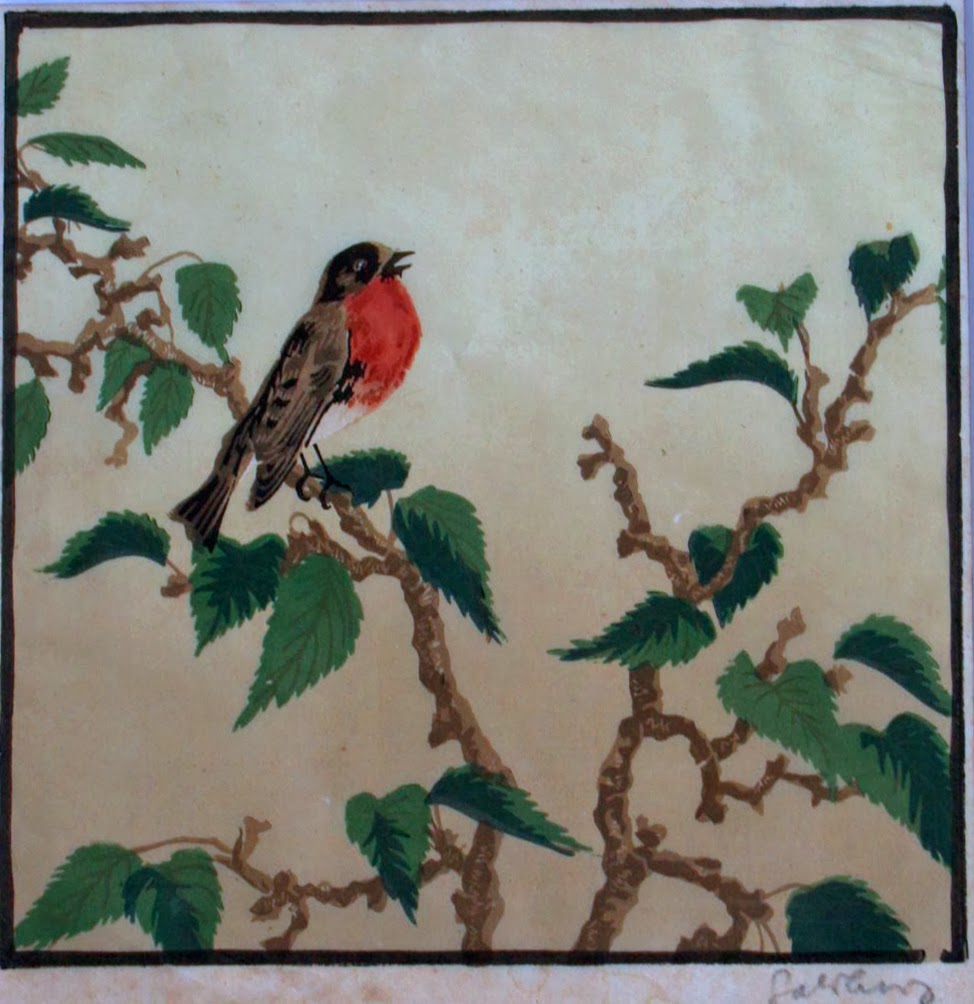 One of my recent acquisitions is this charming red Robin print. “Rotkelchen” in German although I’m not convinced we are talking of the same species of garden bird (see in the comments, below, for the proper ornithological name). Over the years I've found a few more examples of "Goldberg prints" and I even was able to obtain one or two. Thank you August for this last one ! 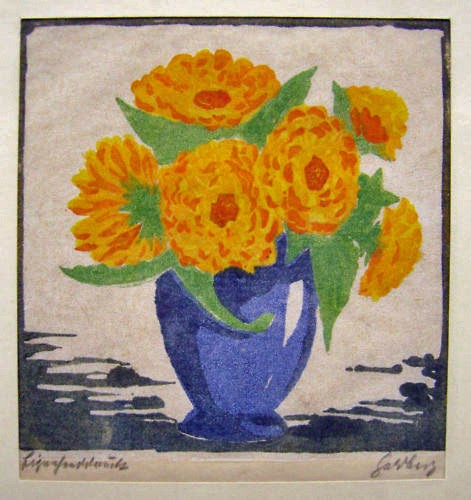 Although Fred Goldberg's prints are not very special, he's not a Walter Klemm or Martin Erich Philipp and by no means his landscape and flower prints are coming close to prints created by the earliest German women printmakers. But they are quite decorative and better then anything I've ever achieved in this field. And to be honest they are usually affordable and thus within my financial reach. 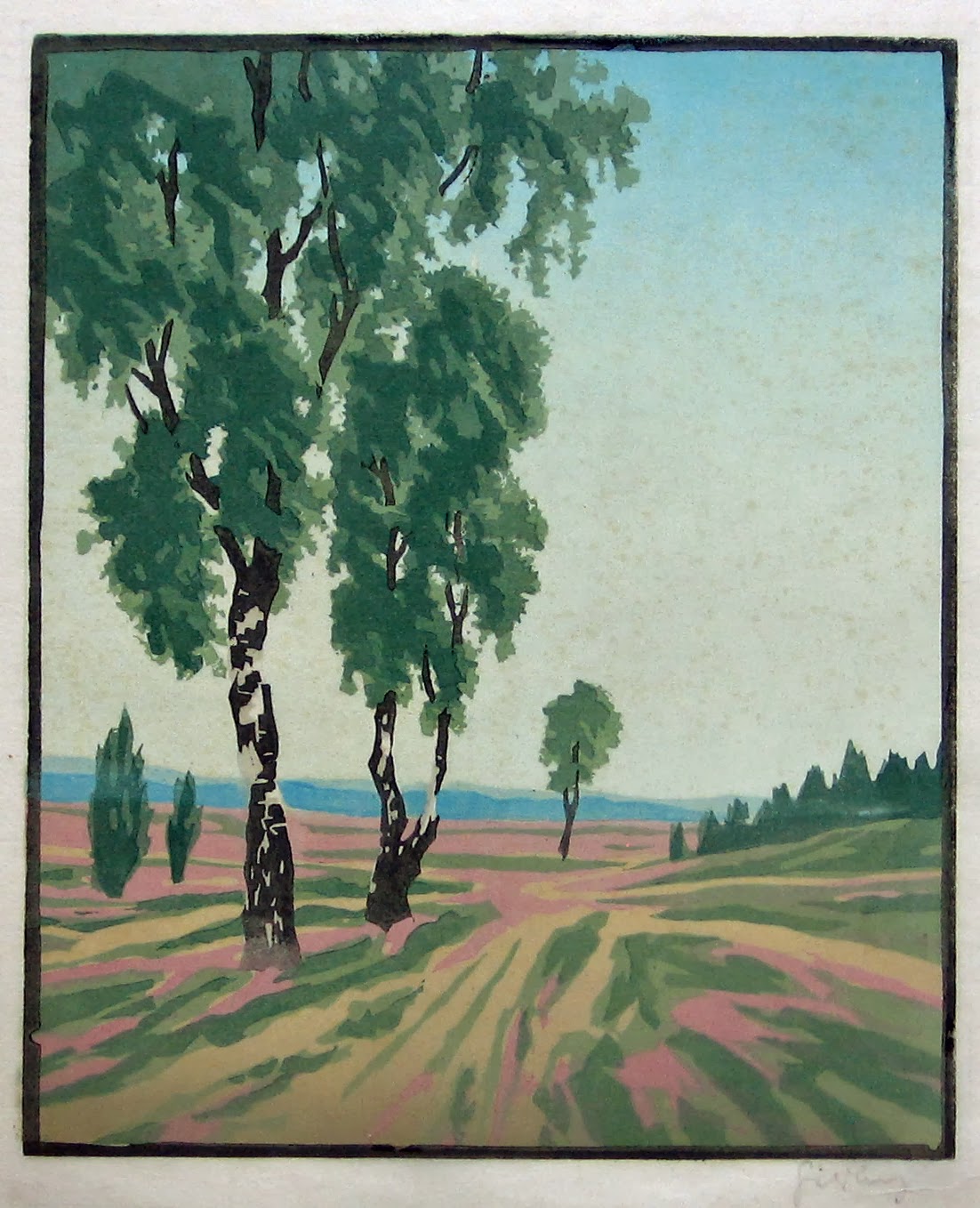 The seller of the Robin, a well known Austrian printmaker and himself a student of Carl Rotky (1881-1977) knew it was by Fred Goldberg and it was this last and vital piece (the Fred part) of information that had to fall into place. All signatures I've seen were without the Fred part. Besides, Rotky and Goldberg had been contemporaries. So here's what I’ve been able to piece together  so far about the life and times of Fred Fredden Goldberg. 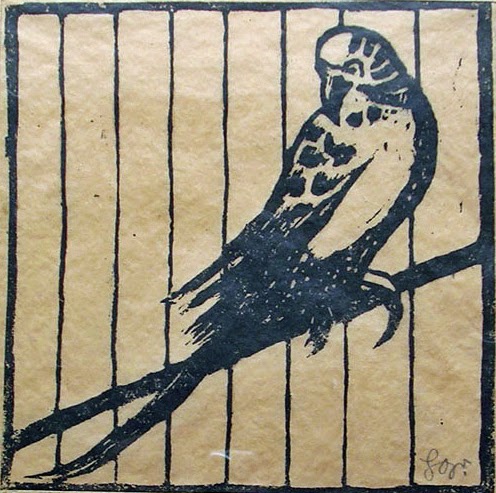 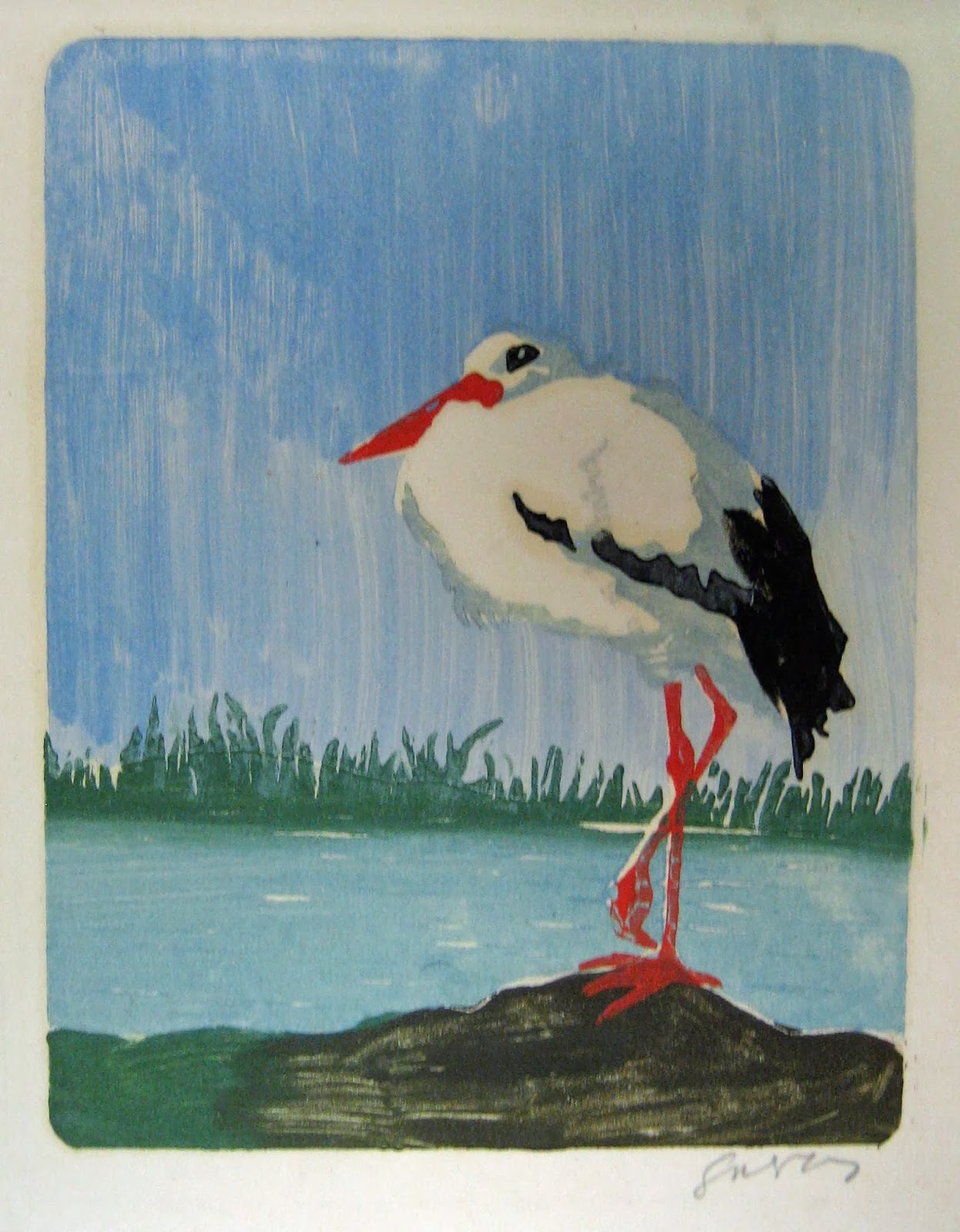 Born in Berlin as the son of an accomplished artist father, whom I haven’t been able to trace yet, he studied at the “Königliche Akademie” in Munich, in the “Ecole des beaux Arts” and also in the “Académie Julian” in Paris. 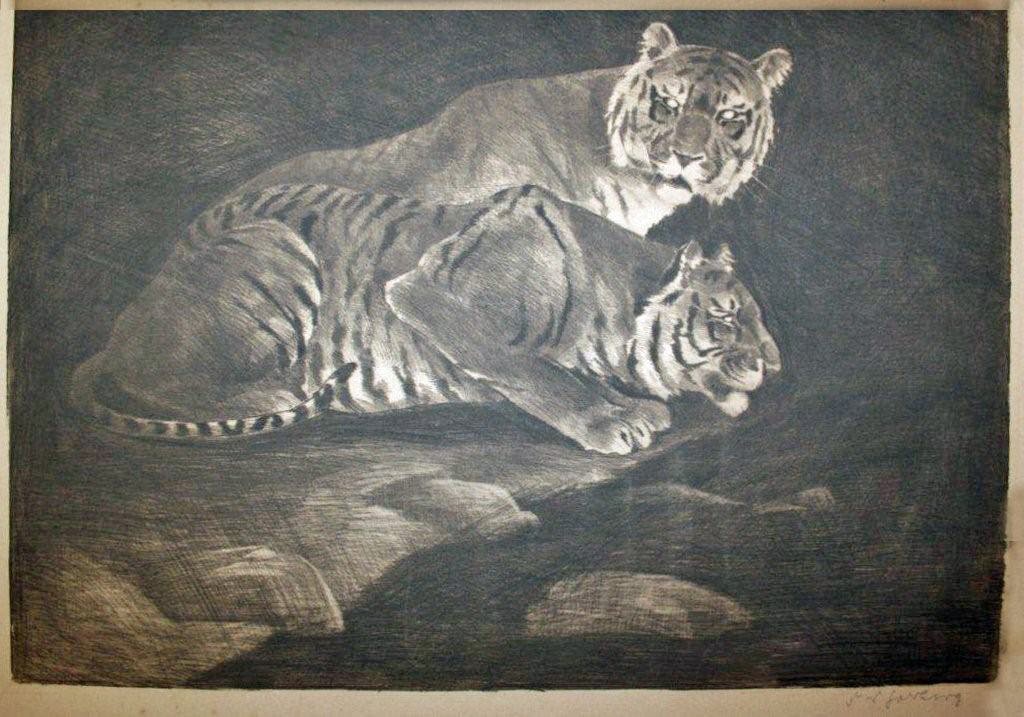 In several different writings Goldberg was described as a “Tiermaler”, a painter of animals, but also as a portrait and landscape painter who had been commissioned to paint the portrait of Kaiser Wilhelm II but also as being a theatre director. It is said he visited travelled to California and also worked there in 1904. If this is true, at age 15, I do not know. In in other article his father is mentioned to be the painter of the Kaisers portrait.

Apparently Goldberg visited many European countries on foot and to improve his skills in paintings animals he travelled to (German) East Africa for a year. Finally, in the 1950-60’s, he was recorded as “disappeared from the records since the mid 1930’s” while before working and teaching as an artist and professor in Berlin.

For Jews life in Germany had become increasingly impossible from the mid 1930’s. The world, according to Chaim Weissmann, the Zionist leader  seemed to be divided into two parts --"those places where Jews could not live and those where they could not enter". 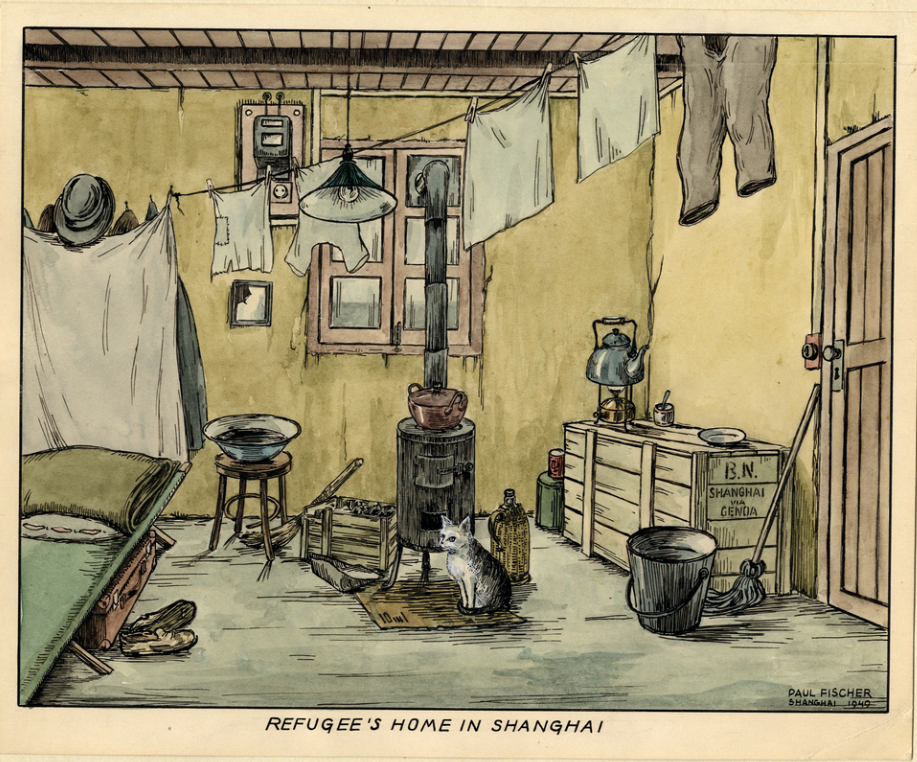 But a forgotten chapter in history are the many thousands of European, Baltic and Russian Jews that found shelter and lived in exile until after the ending of WWII in Shanghai, in China.

Read here* this condensed and immensely interesting story. Among those who found shelter in Shanghai in 1938 was Fred Goldberg who after the war  did not return to Germany but emigrated to California in 1947. America had financially supported the Jewish Shanghai community.

From his Shanghai refuge period these watercolors by his hand have survived. Goldberg lived and painted the rest of his life until his death in 1973 in California.


A fire is said to have destroyed most of his surviving paintings in 1980. I think his woodblock prints were all created in the 1920-30’s and in Berlin. 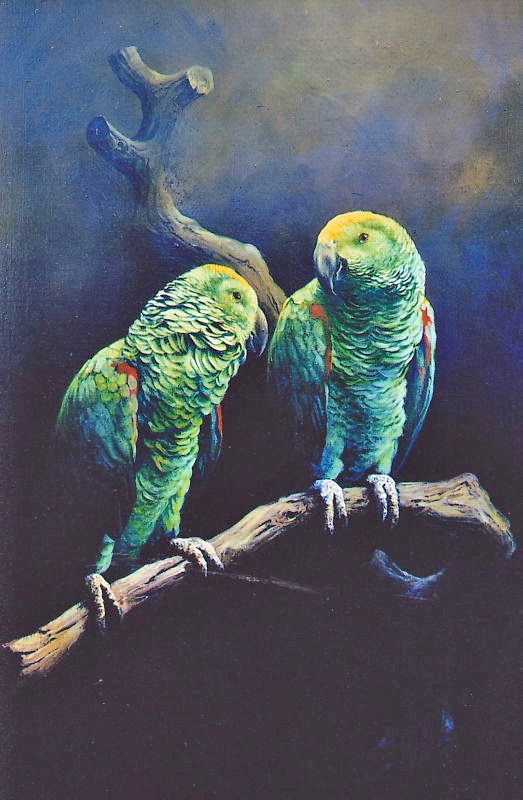 Any further information on the work and life of Fred Fredden Goldberg is very welcomed and shall be shared in this Blog.

August Trummer (b.1946) send me these 3 auction catalogue pictures if which I would very much like to know and see the original color prints. 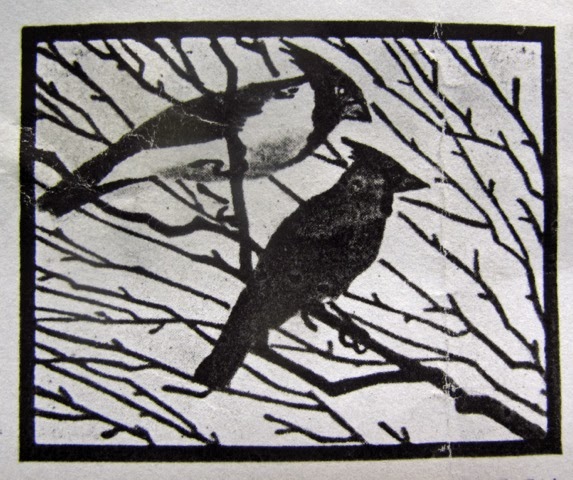 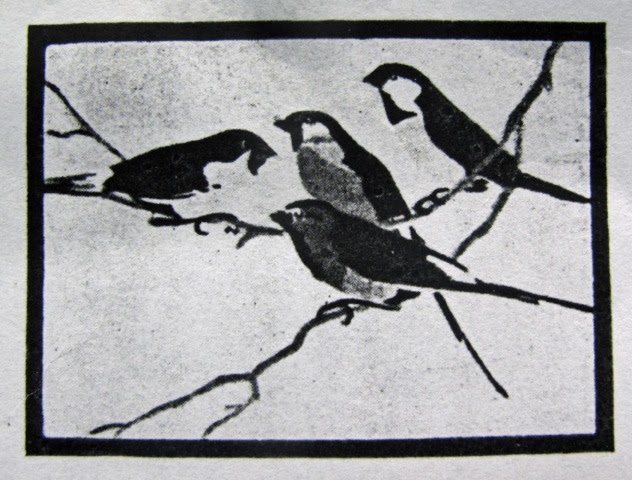 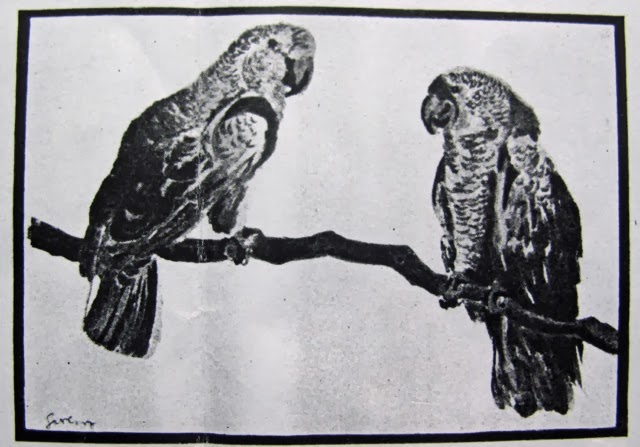 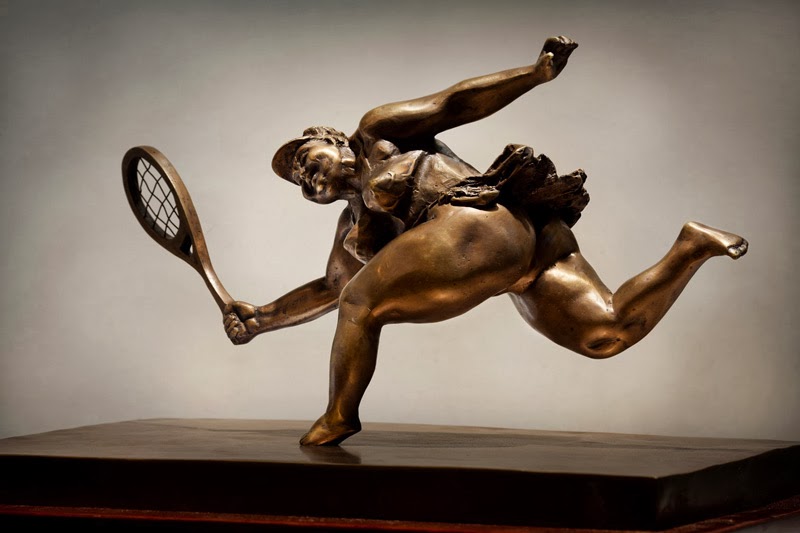 Xu Hungfei studied at the Guangzhou Academie of Fine Art and graduated in 1990. Take 10 minutes to Google (pictures) this artist, enjoy, be amazed and I guarantee you a smile on your face that will last for an hour. His Chinese girls are elegant marvels, a combination of health, strength, aesthetics, athletics, elegance, grace and sheer beauty. 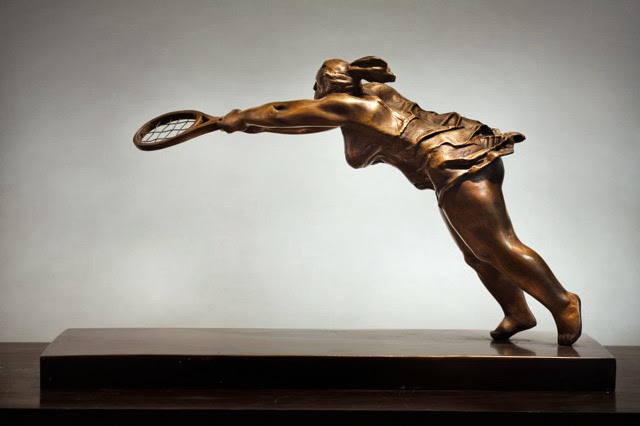 Today I introduce the tennis playing athlete of his family as the Australian open is struggling with  playing tennis in extreme heat. In Guangzhou tennis, like most other sports, preferably is played in a light dress and barefoot.

And to know this great talent has several sisters playing baseball, polo and golf……….. 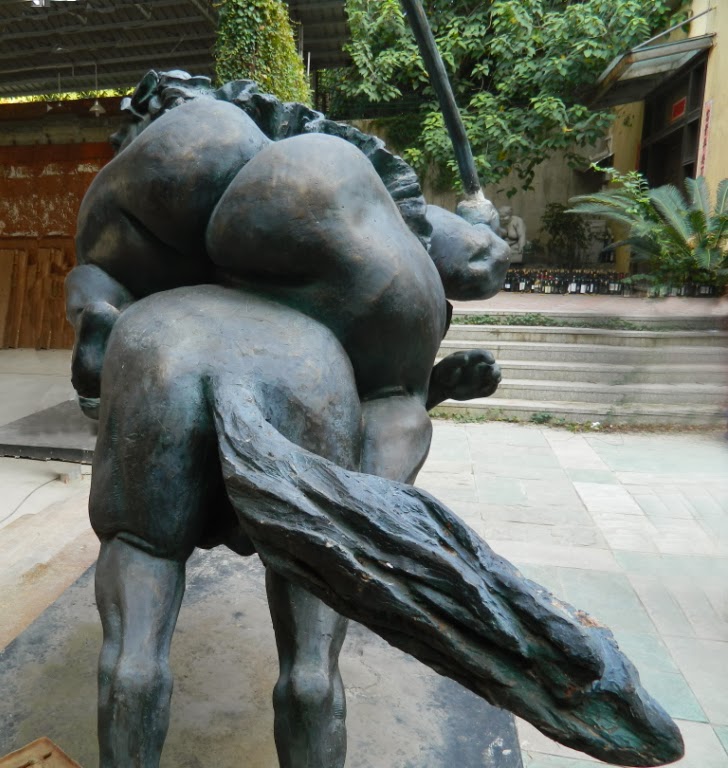 All pictures are mouse clickable and borrowed freely from the Internet for friendly, educational and non commercial use only.
Geplaatst door Gerrie op 15:11 4 comments:

Hector Giacomelli, 24 finches on a perch 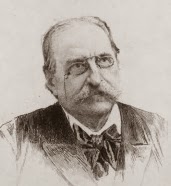 Just the one picture I've discovered today to share. Used as an "in between postings" posting. Giacomelli was the son of an Italian professor of singing, jeweler and industrial designer. He is best known for his delicate watercolors of insects, animals and particularly birds. But it's the jolliest most delicate picture of a painting I've come across combing the digital beaches sofar from the sofa this winter.

Although he was quite famous in his days, made lots of money and worked with Gustave Doré, there're are few biographical details to be found other then his  entry in Wikipedia*.

Clickable to embiggen picture borrowed freely from the Internet (Wikipedia) for friendly, educational and non commercial use only. 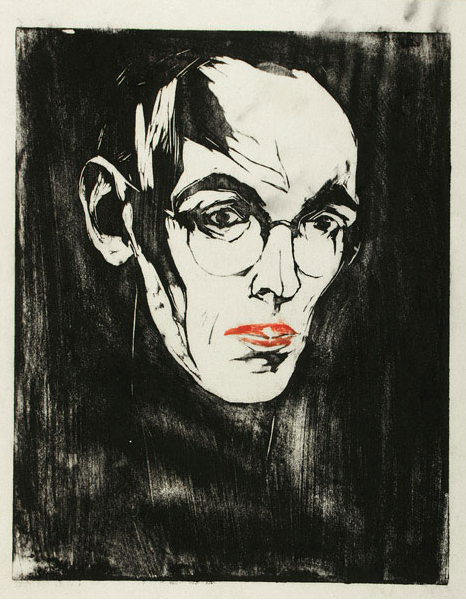 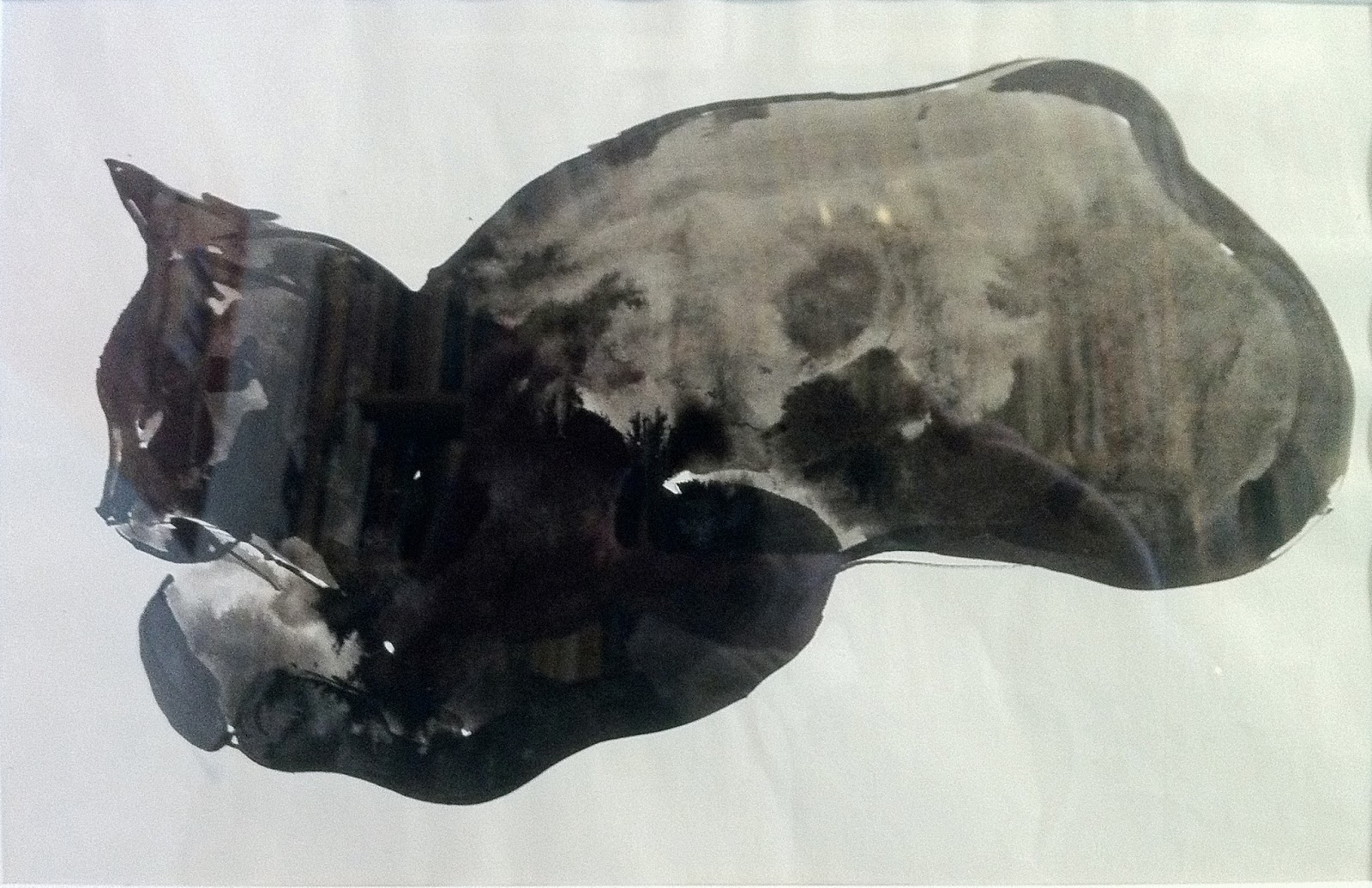 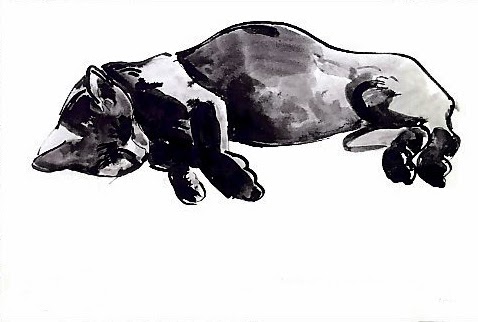 Descendent of a German branch of Hungary nobility and ruling families Joachim started his studies in the “Kunstgewerbeschule” in Berlin. His father ran a printing, publishing and newspaper company in Prenzlau a city north of Berlin. 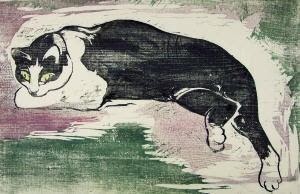 Rácózcy studied between 1913-1921 with Emil Orlik (1870-1932) and because of the circle of students around Orlik became acquainted with later famous artists like Hanna Höch and George Grosz (who fled the Nazis to America in 1932) and he was to become Orliks personal assistant, printer and secretary.

Through his friendship and job with Orlik he was able to live through the “Kunst und Kriegspolitik” of Adolf Hitler. After Orliks death he managed to live from his artwork and commissions and was appointed librarian of the “Berlin Hochschule für Kunsterziehung”. He had before lived for some time in the beautiful region of Langballig near Flensburg  close to the Danish border overlooking the Baltic sea and famous for its wonderful panoramas of picturesque villages, rolling dunes, blue seas and yellow flowering fields of “raps” or rape.

A generation later it was this landscape that inspired printmaker Klaus Fussmann (1932-) creating his contemporary paintings and linocut prints. This posting a nice bridge to show some of his work in a next posting.

In 1943 Rágóczy married Irma Roth (1905-1989) whom he had known since 1927 possibly through Orliks painting classes because I can not help seeing her modelling in one of Orliks paintings, although I’m aware the particular "bobbed" hairstyle was very much in fashion in those years. His surviving letters to his later wife were published. 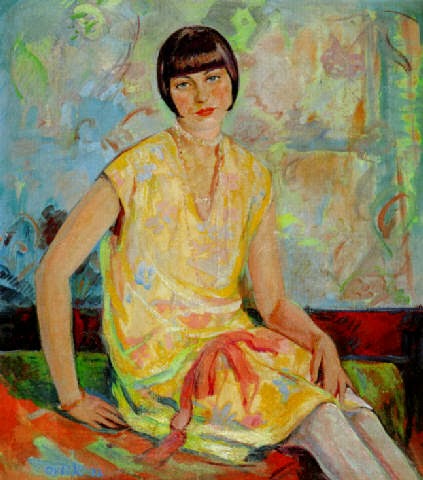 Although practically obscured and forgotten during his life Rágóczy, who became blind in later life, is mostly remembered for his love for cats. After Irma Roth died in 1989 she left a legacy and at last the man who had ones exhibited with artists like Lovis Corint and Max Liebermann was awarded an exhibition in Berlin. It is said he left some 1400 sketches, drawings, watercolours and woodblock prints mainly of of cats. 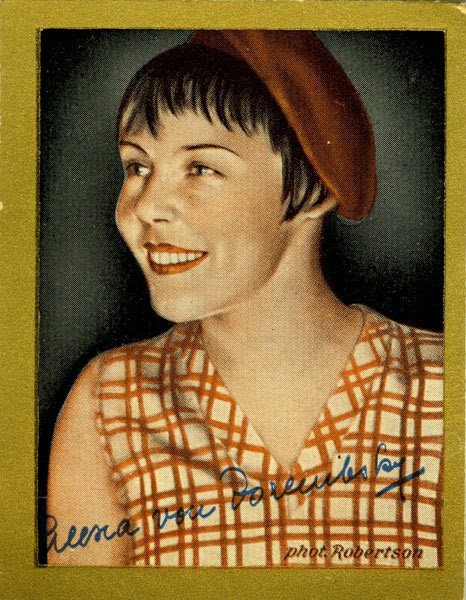 Through Orlik, this classic photographic study of the actress Alexia von Porembsky (1906-1981) with chinese hat has Anders Zorn qualities, Rágóczy also took up photography and although not much seems to have survived sometimes personal photo’s like the portrait of his wife Irma turn up in Ebay. 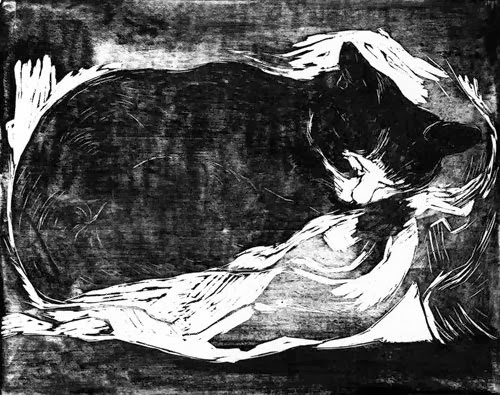 A small collection of his work is preserved in the Flensburg Museum, prints and watercolours of cemeteries, churches and of the nearby island of Sylt. 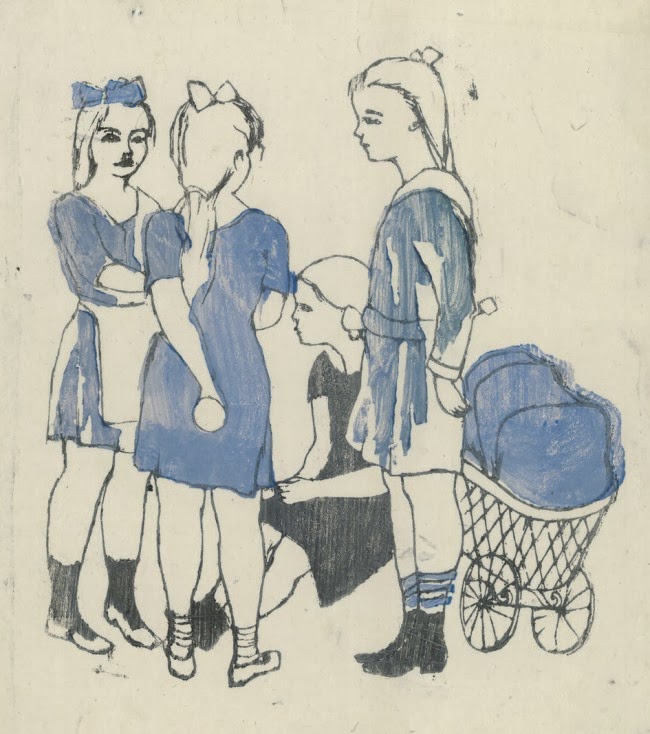 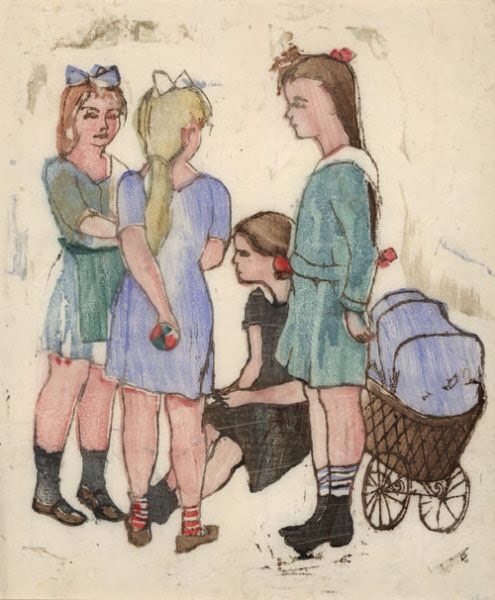 All pictures taken from the Internet for friendly, educational and non commercial use only.
Geplaatst door Gerrie op 14:01 3 comments: