Sorting and organising "other stuff" collected over the years selecting prints for the book and going over piles of paper waiting for identification, restoration and conservation, I selected these various prints for sharing and possible identification. 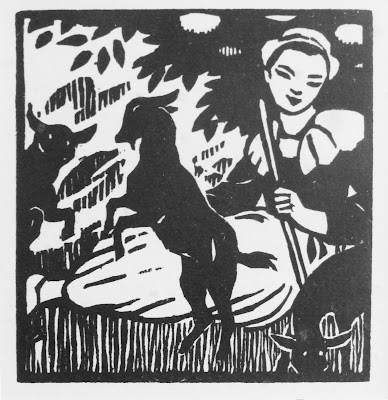 Found in the Netherlands, although possibly of German origin; 1920's (?) Exceptional and intriguing choice of motiv. A century later "black men" (men of African genetic origin) depicted like this by our grandparents would cause raised eye brows and considered "inappropriate, not done and controversial". A cabaret, brothel or bar scene ? 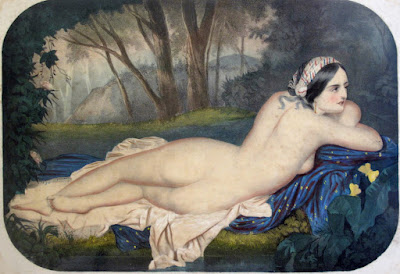 19th century chromolithographic print: (Victorian) reclining nude. Not a Paul Sieffert (1874-1957) painting but bought for a few bucks (€€) and almost just as nice. Sieffert was a French painter almost exclusively known from his numerous reclining nude paintings. And yes: he was pretty good at it. 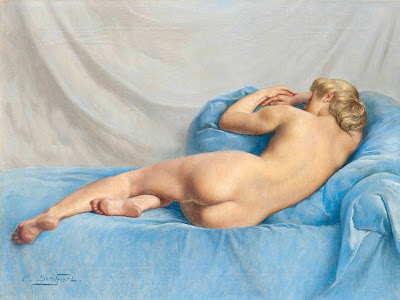 As always: all help identifying the artists involved is very much welcomed.
Geplaatst door Gerrie op 11:51 No comments:

Dorothea in Austria again solved a mystery. The print "Susanna" (and the elders, symbolised by two pair of spying eyes) was created in 1922 by Austrian sculptor and printmaker Albert Bechtold (1885-1965) who lived and worked in Bregenz. 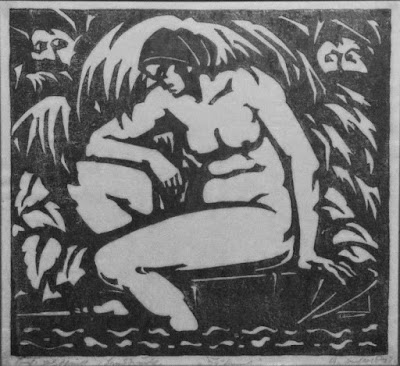 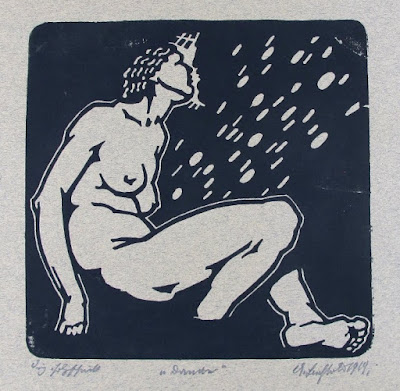 After serving on the Italian front, marrying his Italian wife in 1917 Bechtold created this "Danae", daughter of Euridice, at the "Moment Suprème": the secret conception of Perseus by Zeus symbolised by a golden rain. Bechtold cleverly created a visual second layer to this myth: looking carefully Danae is reaching out to be kissed by bearded Zeus.... 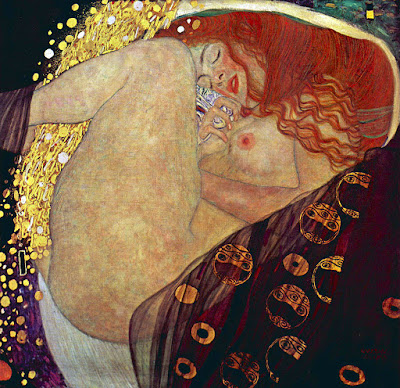 The myth of Danae was depicted by numerous artist: from Rubens and Rembrandt to our modern times. Probably the best known and loved paintings of Danae is by an also Austrian artist: Gustav Klimt.
Geplaatst door Gerrie op 11:34 No comments:

(born probably in Trier (Saarland) around 1890-1895 - after 1923)
German painter and printmaker.
Probably working and living in Herford near Bielefeld.

Today I keep my promise to Peter and share what I was able to find out after finding this monochrome print by Elsisabeth Roeder-("Herford"). All examples of works shown in this posting are (available) in the collection of Peter: the link to his collections, offers and gallery is at the end of this posting/article. 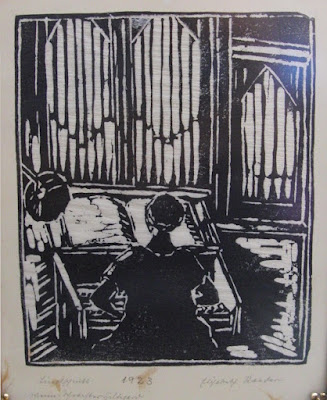 Elisabeth is not mentioned in any of the artist lexicons or address books and a quick survey of possible queries and hits in the www. did have not much result. Until I received notice of the subtitle of this print:

I liked the print at first sight but knowing the artist is portraying her probably younger sister (Hildegard is 18 in 1923) makes it even lovelier and intimate.

Besides: one must own a pretty big house to install a church organ: you do not have to apply rocket science to figure out her father either was the vicar of one of Herfords churches or he had "something to do" with church music. So here goes: 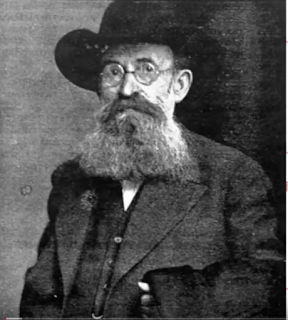 This shy and bearded gentleman is Elisabeth's father Karl Roeder, born in Neunkirchen in Saarland in 1860 as son of Karl Roeder Sr. a primary school master. Although Karl Jr. followed in the footsteps of his father as a  primary schoolmaster in Trier he also studied church organ in Berlin. No doubt he taught his daughter Hildegard (b. 1904) too. Hildegard was later married to one Hermann Steinmetz and was a co-author to a commemoration Herford Schools and teacher Karl Roeder booklet in 1960. 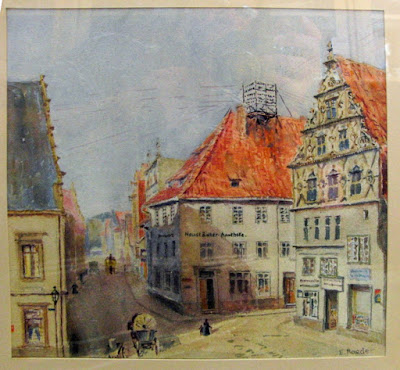 Perhaps the view on the Neustadt Apotheke (from a second floor ?) holds a clue were Elisabeth or the Roeder family lived ? Hopefully a local historian or interested resident of Herford one day will pick up this posting. 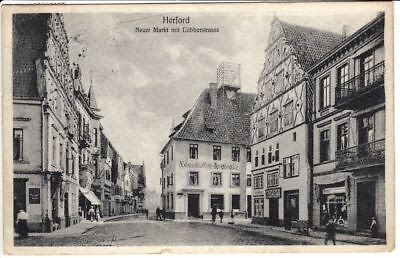 Karl Roeder married Auguste Schaun and besides Elisabeth and Hildegard they had another 7 children probably born in Trier but also in Herford because in 1903 Karl Roeder was appointed head of Herford "Musikseminar" also having a position in several Herford schools, being a private teacher, composer, educator choir-master etc... He died in 1933. In his day he was a prolific composer of organ music and much involved in school and community singing. Most of his many compositions (Organ Choral Preludes) were lost in a fire in the last days of WW-II but if you search youtube there are actually some pieces that can be heard: He is no Johann Sebastian but nevertheless wrote some very agreeable music. 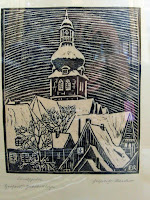 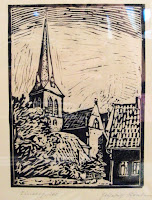 So, from having nothing at all on this forgotten artist before today we now have at least a start or a beginning of a short biography and a first catalogue of works. She was probably a local artist, possibly self-taught but judging from the quality of her paintings and prints I certainly had expected to find some local references. It could also be I looked in the wrong places and welcome all help, clues or suggestions and comments (but only the friendly ones). 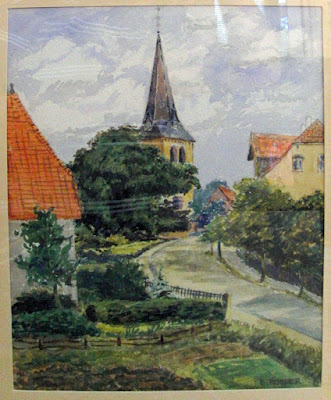 Besides these examples that all show landmarks of her homestead Herford (10 Km. north-east of Bielefeld) she also visited the picturesque village of Schieder-Schwalenberg which is not more then 20 Km to the south of Herford. On her way she will have paused halfway in the stunningly beautiful medieval village Lemgo of which I have very fond memories. Schieder-Schwalenberg was popular with painters and it even had its own "Malerkolonie" but as goes with Elisabeth Roeder: not much can be found. 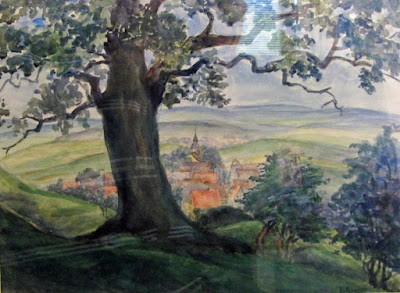 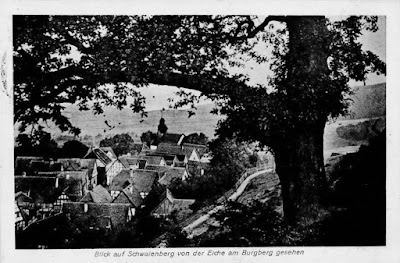 PS: The lovely province of Detmold is also the home country of printmaker Ernst Rötteken

All the prints and watercolours in this posting are from the collections and gallery of Peter Weidlich: Gluckburgerkonstkontor in Glucksburg near Flensburg on the Flensburg Fjord near the Danish border. Here's the link to Peters Ebay offers and shop well worth a visit :

All other pictures were are borrowed freely from the internet for friendly, educational and non commercial use only.
Geplaatst door Gerrie op 14:06 No comments: