Strolling and scanning a huge carboot in the weekend is always an adventure and a treat and I never mind getting up early, very early. And although the reward this time was pretty slim (keeping money in the kitty for a next visit) I was very content finding this pretty watercolour painting. Here’s the story that followed my research, removing wrinkles and stains and cutting a fresh modern acid free mat. 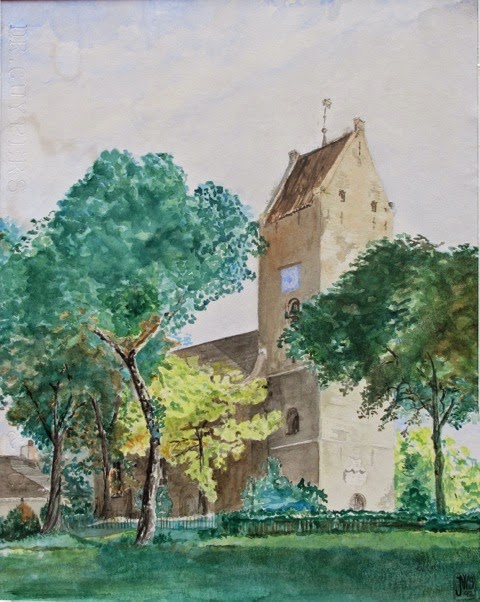 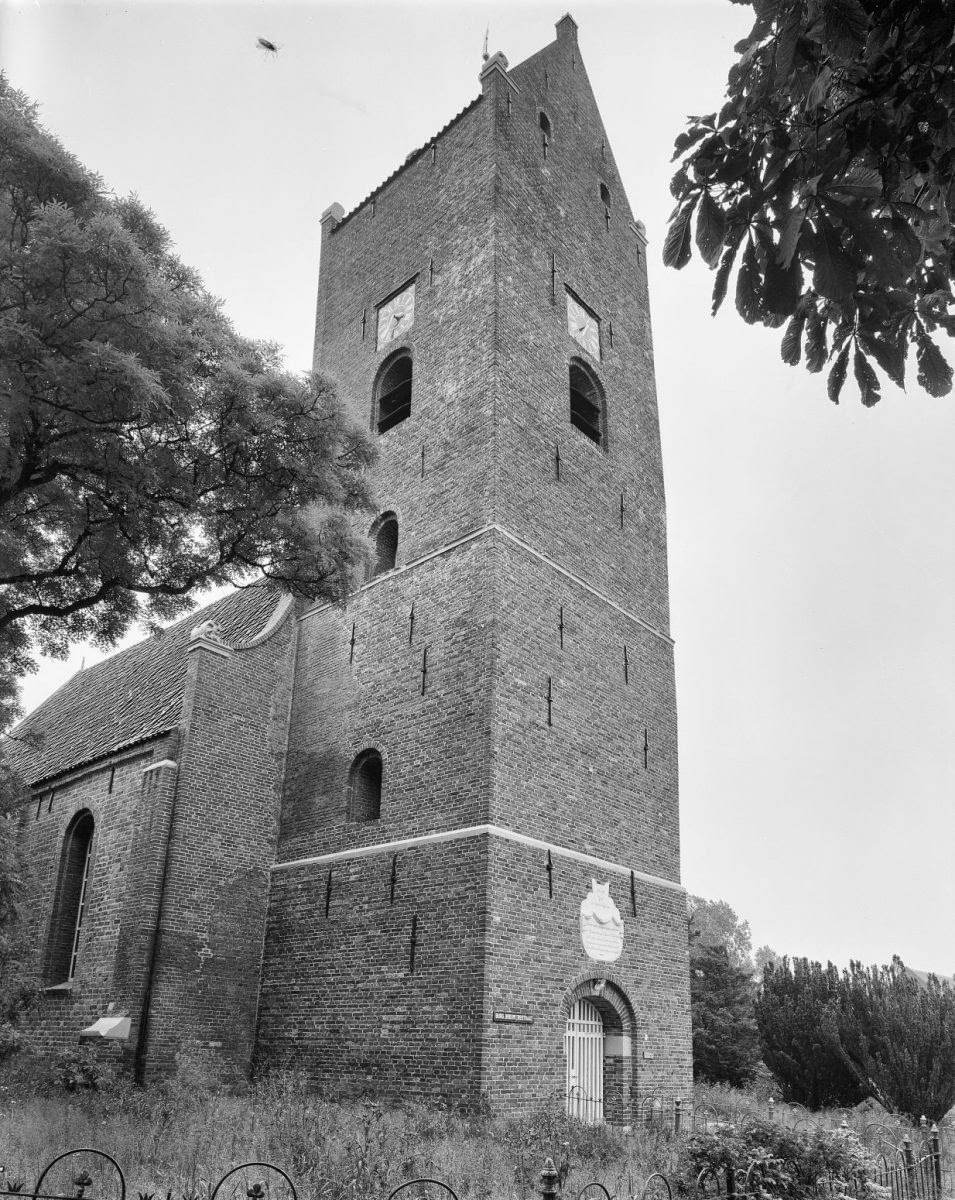 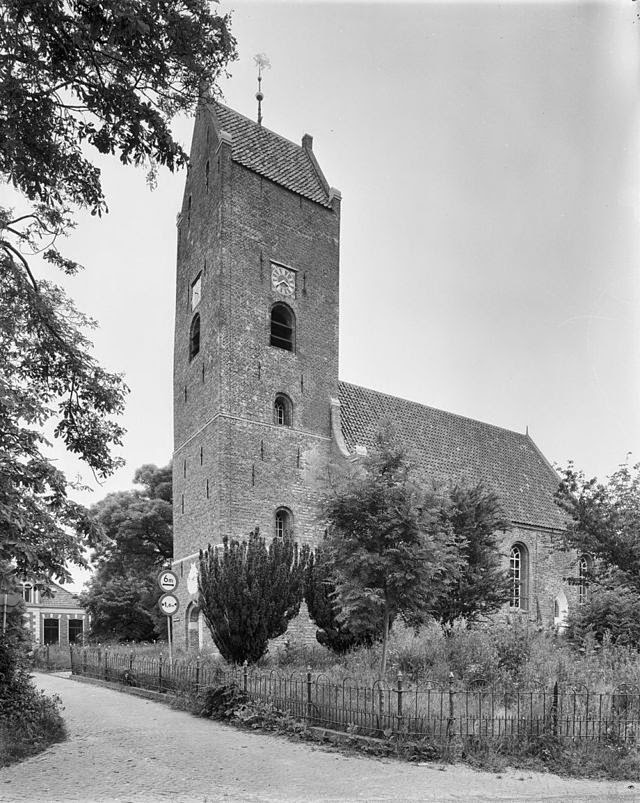 Scribbled in pencil on the back: “Kerk te Garnwerd, ter herinnering van  Joh.W.Sterringa 1942”. (The church of Garnwerd, in remembrance from J.W.S). 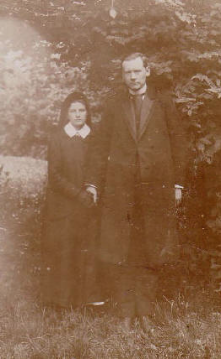 Johan Willem Sterringa was born in 1920, his brother Herman Evert, who followed in the footsteps of his father, was born two years later. They were the sons of reverend Herman Gerbens Sterringa (1888-1978) and Annigje Jongedijk (they married in 1919, left) who served the community of Garnwerd from 1941-1947.

The reverend Sterringa had two brothers, Gerhard Antonius, who also was a reverend and an older brother Tjesse, a schoolteacher, poet and Dutch scolar who also had two sons of which Roelof, born in 1909, became a psychiatrist who, what a weird co-incidence, happened to be in the 1960’s our next door neighbor in the city of Amersfoort where we then lived and where I attended High School. A small world ! 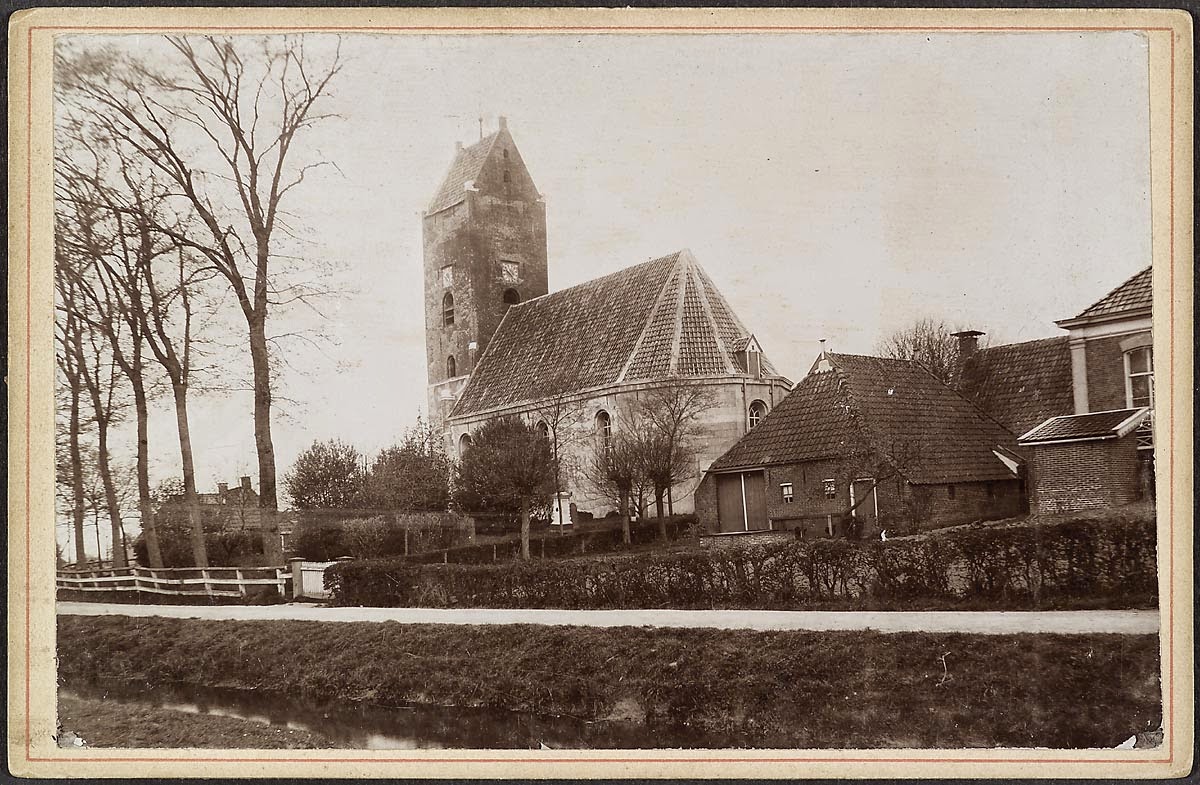 The picturesque village of Garnwerd, 12 km.NW of Groningen is situated along the tidal Reitdiep, an old and now dead, sea-arm that once connected the mighty city of  Groningen with the North Sea meandering through the wonderful “Hooge Land”.

The village and the surrounding landscape and it’s famous Hotel Hamming (below) were a great inspiration for the painters of “the Ploeg” (link) a collective of expressionist (mainly) painters established in 1918. The Groningen Museum has their work displayed in a permanent exhibition.

The rectory, build in 1883, was recently restored and today is in use as a bed and breakfast. The painting, obviously a view from it's garden, probably decorated its walls before, maybe when son Johan Willem left home 1n 1942 ? 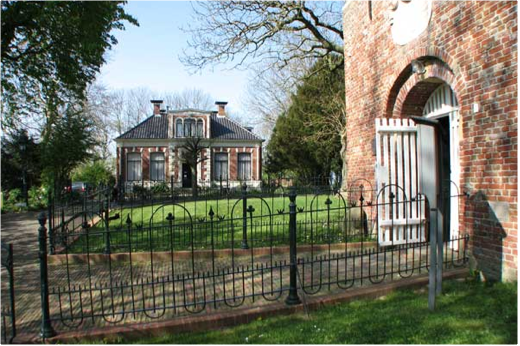 I have no clue what became of J.W. privately or as an artist. The house however would be the perfect place for the painting to return to, so maybe I’ll write to the owners …..or just wait until this posting reaches Garnwerd. It is after all a small world.

For those who have had the opportunity to have a look at my German Women Printmakers list* (see before posting): here's an artist I had mistakenly labelled as Swiss but only yesterday discovered she actually was born in, lived and worked in and probably closed her life in Berlin. Here's her entry in my GWP index. 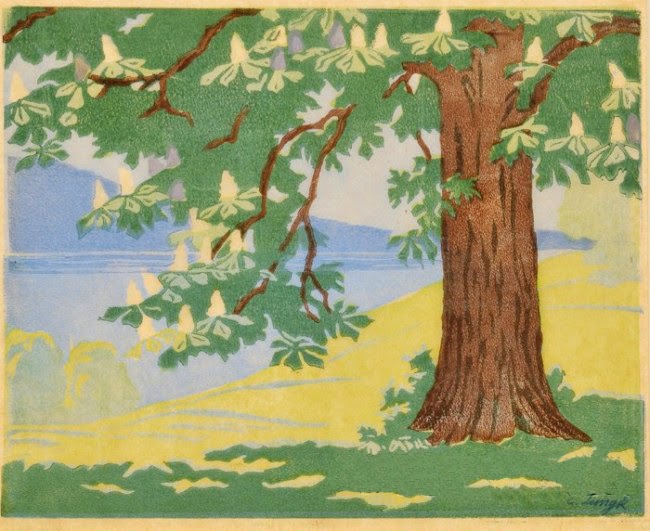 Jungk, Elfriede        (Berlin 29-05-1889 – 1954/1969 probably Berlin*)
---  Painter and printmaker. She studied in the “Zeichen und Malschule des VdBK” in Berlin and from 1912 was a student of Swiss alpine painter Hans Beatus Wieland (1867-1945) in Munich,  a popular and respected artist who was commissioned to make a very large panoramic painting of the Tirol Alps for the Chicago World Exhibition in 1893 and was a member of the Munich Secession.
Elfriede Jungk was a member of the VdBK from 1915 to 1969(!) and of the“Darlehns- und Unterstützungskasse” in 1950 in Berlin. Also member of the “Berufsverband Bildender Künstler” and “Reichsverband Bildender Künstler Deutschlands (Berlin)”. She exhibited with the VdBK in 1926, 1939, 1940, 1956, 1958, 1967 and in Marburg University Museum (near Frankfurt) in april and may 1951. She is mostly remembered by her many realistic alpine paintings.

* In recent auctions and publications the year of her death is repeatedly suggested to be 1954 or 1955. Membership and exhibition years  in the records of the VdBK in Berlin however suggesting 1969 might be a more plausible date. 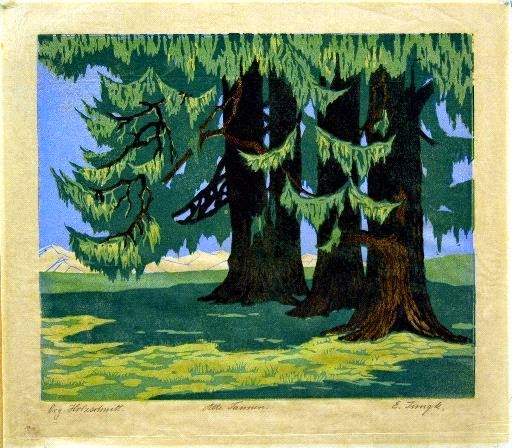 Elfriede Jungk demonstrates that it would probably have been inevitable as a German woman artist/painter and born between 1860 and 1895 not to try at woodblock printmaking. Many of them did. Emil Orlik after all was around in Berlin and around him a group of enthousiast followers was spreading the gospel, the theory and practise of modern printmaking within the courses of the "Verein der Berliner Künstlerinen (VdBK)". I honestly do not believe Elfriede was among the most talented printmakers, she's by no way a Helen Maß or Else Schmiedeberg, but nevertheless: she tried. As early as 1912 when she is supposed to be in Munich (where of course also several skilled printmaking artists and teachers were active in the academy) studying with popular Swiss painter Hans Beat(us) Wieland according to the date attached to this print below:1912. 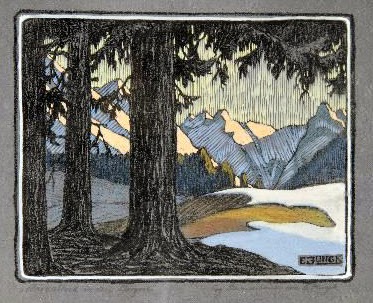 In these two pictures it is clear how she worked one of her paintings into a print but didn't bother to mirror the image before cutting the blocks. 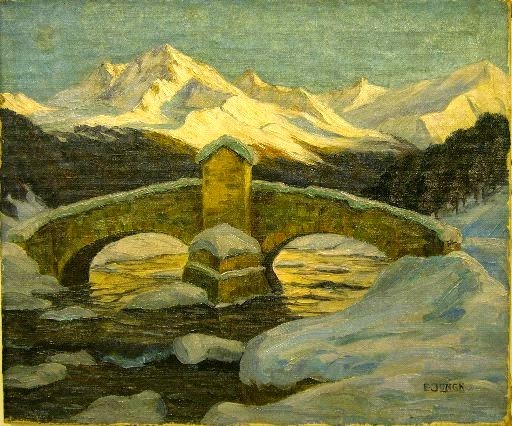 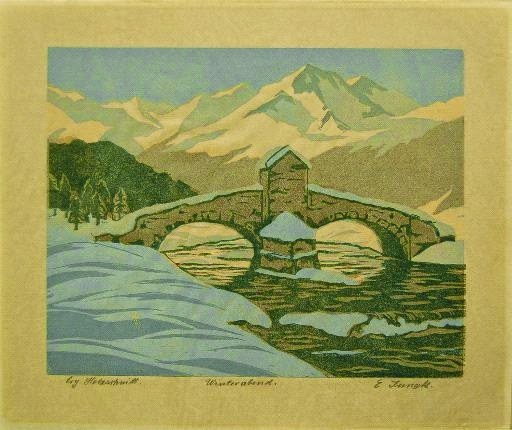 And two more examples of prints that I've scratched together from auction catalogues, galleries  etc.. 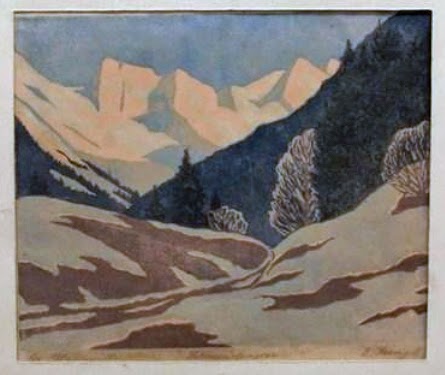 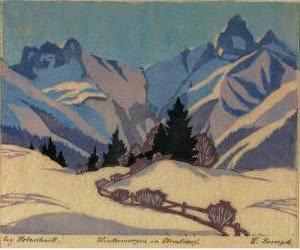 I also found these pictures of the 1951 Marburg exhibition showing many of her alpine paintings. 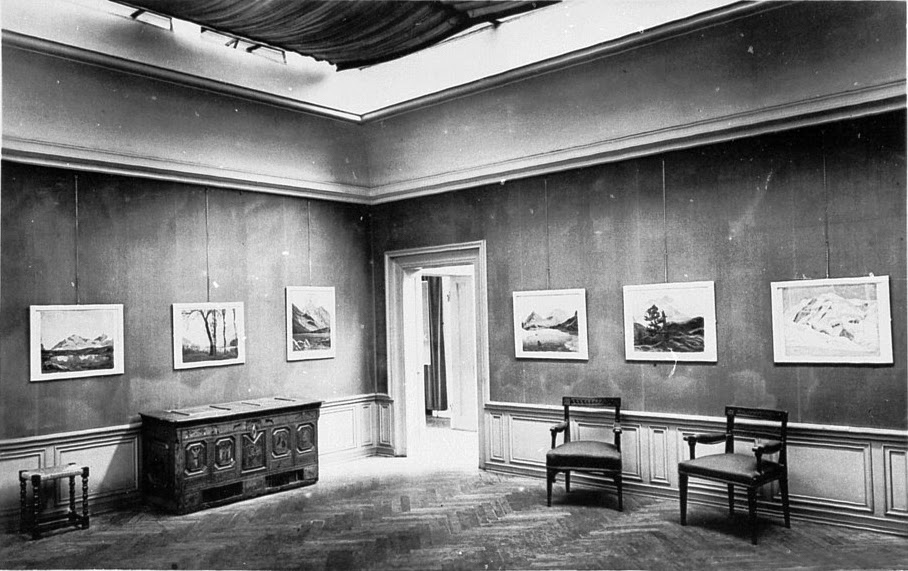 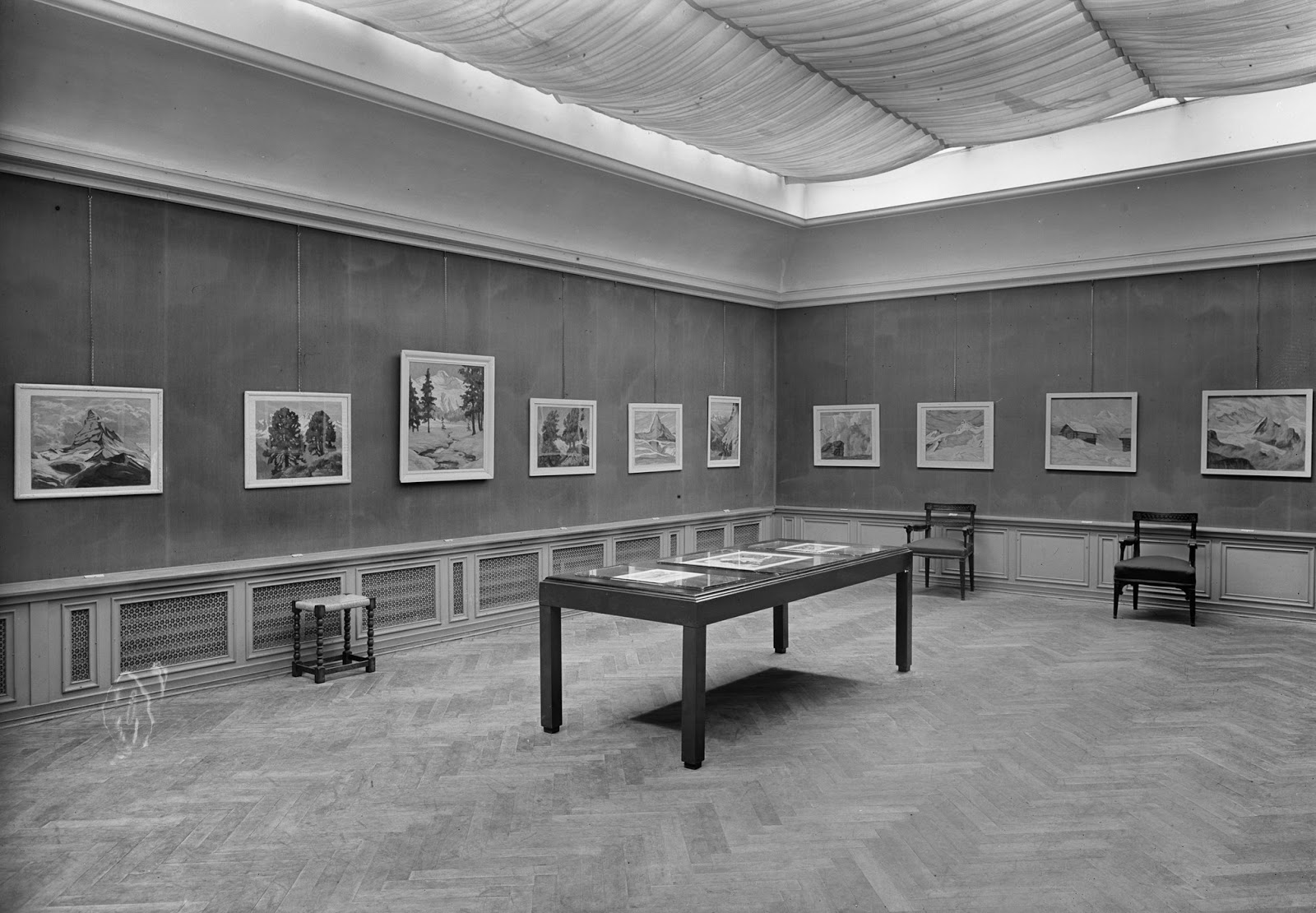 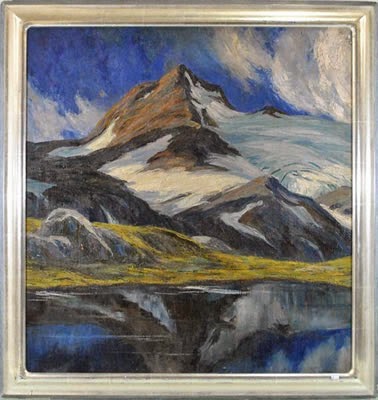 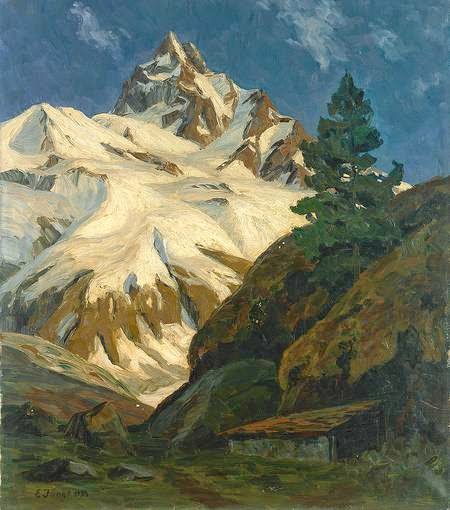 All pictures are mouse-clickable to embiggen.

Margot von Schlotheim: Obscure but not forgotten. A convocation

Sharing an obscure and forgotten printmaker is a fine opportunity to give readers of this Blog an impression of what I've been busy with for the last couple of years. Margot von Schlotheim is just one of the entries in a proposed publication concerning a group of 160 German women artists born between 1860 and 1900 and who were professionally active pioneering with color woodblock printmaking between 1900 and 1935. Only a few of them reached fame, many of them enjoyed appreciation but most of them stayed relatively unknown and are today known and remembered by a few prints only, like: 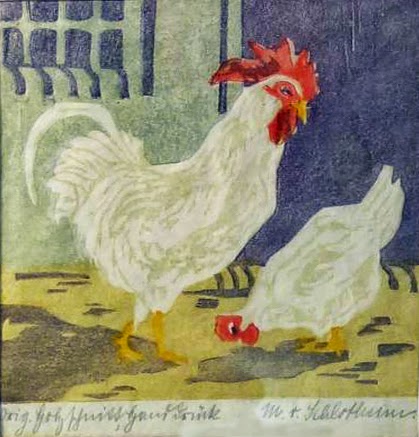 Known (to this day) by three small prints showing animals. She was the daughter of Major-General Albin von Wentsky und Petersheyde (1860-1917) and Gabrielle Freiherrin Von Hoverback genannt von Schoenach. Her fathers grandfather Albin (1804-1849) was a friend of composer Robert Schumann (1810-1856). She married landowner Freiherr (Baron) Friedrich Hartmann von Schlotheim (1881-1966) in Breslau in 1909 and the couple had three sons. Her prints have  some resemblance  to the animal/zoo prints made by printmaker Fritz Lang (1877-1961) in Stuttgart and Ludwig Jungnickel (1881-1965) in Vienna.

You can help me with sending biographical or genealogical facts and pictures of prints of the women I've listed here*. I've recently completed with the help of my friend James in Glasgow the résumé biographies of these 160 artists, the result of my ongoing research, still discovering and adding new artists, newly discovered prints and facts almost every day. Much has been achieved yet, you'll be surprised, but there are several artists who's lives and careers are still, so very undeservedly, a complete mysterie. With your help we can try to chance that. 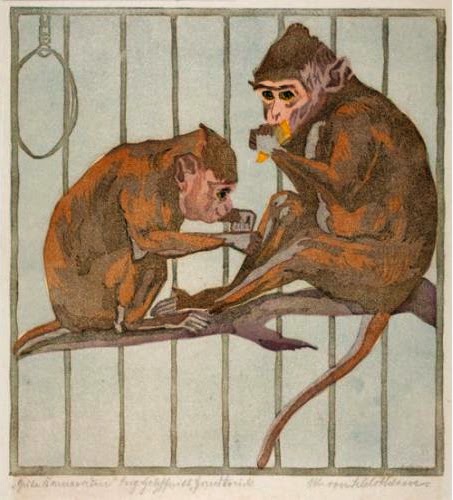 The ultimate goal is a publication, a book, an Ebook or: a Liber Amicorum (a  limited edition book for friends or subscribers only) with the many many hundreds of examples and pictures of prints and facts from the archive that I've build over many years of collecting and researching, writing to museums, galleries, exhibitions, auction houses and archives and ploughing through the Internet, magazines and reference books and with material send to me by collectors, readers and other enthousiasts. 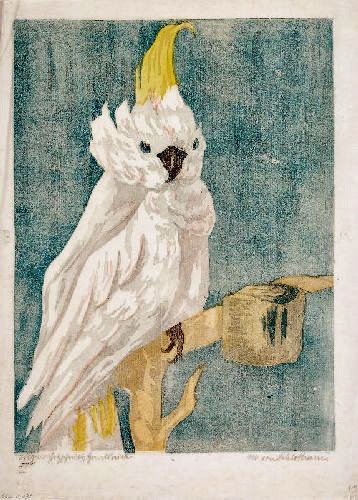 Scroll down the index/list of artists and you'll find some examples of the biographies (in German: kurz-Biographiën) as the result of the work in progress. Digital cross-referencing the biographies bringing remarkable facts to light like shared schools, courses, teachers, professors etc..

All pictures borrowed freely from the Internet for friendly, educational and non commercial use only.
Geplaatst door Gerrie op 19:45 2 comments: