Several years ago (2011 !) Charles wrote his posting and spoke in admiration of Siegfried Berndt (read here). Berndt's influence on Modern Printmaking is probably much greater then until now is realized. In 2013 a booklet, referred to in the comments of Charles posting, was published. 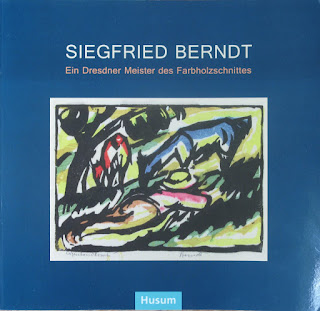 Winning a first price at the end of his studies enabled Siegfried Berndt (1880-1946) to travel to Brussels (where he'd lived the first 4 years of his life because his father had moved there), to Paris (engaging his wife), England and Scotland in 1907-08. Although the price was awarded to an oil painting created in 1906 ("Heu-ernte") in the final stages of his studies he was already heavily involved (and experienced !) in creating prints "the Japanese way". 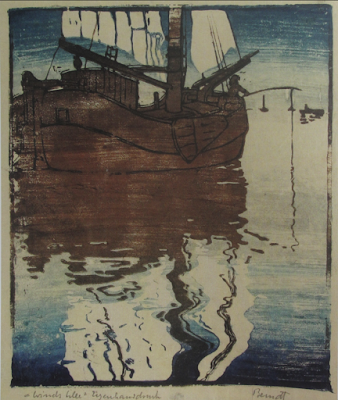 Here're the two earliest examples I could find (also 1906 !) showing the steps of Pillnitz Castle near his native Dresden on river Elbe, and Windstille" a truly remarkable early print. It shows he already was heavily inspired, influenced and experienced with printmaking "the Japanese way". In those years (from 1905) Emil Orlik just had started teaching in Berlin. I often wonder about the possible connections. It is even said Berndt taught and trained his teachers and professors in Dresden in woodblock printmaking (!) And because of that his printmaking influence must be in every Dresden later trained printmaker including the later expressionist "Brücke" artists, Martin Erich Philipp and many others. 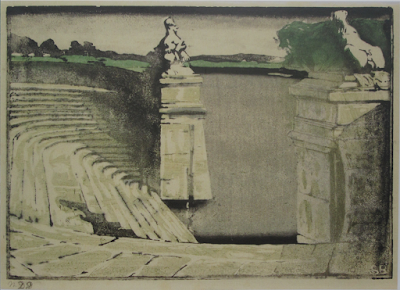 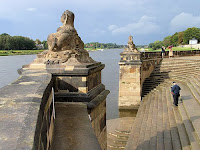 This is a fine opportunity showing you some remarkable things that I've discovered recently comparing pictures of prints by Berndt from my pictures archive (I actually own just one print by Berndt, the iconic sailing boat print (later) as my interest and true field of investigation and collecting is pioneering German women printmakers born before 1900 (they were all followers, not teachers, but it is the influence of their possible teachers that is so interesting). 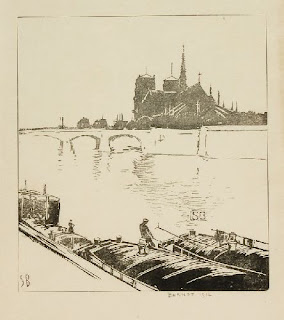 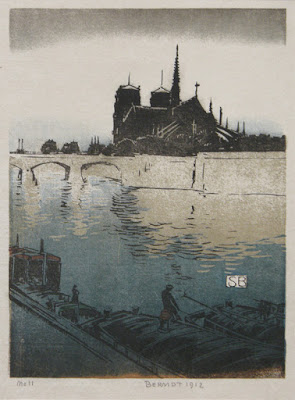 I noticed Berndt played with composition comparing this color print of Notre Dame and a similar, also 1912, monochrome print obviously inspired by his Paris visit. (Meeting Henri Riviere , August Lepere and the Beltrand brothers ?) The question is wether he elongated or shortened the composition: I suggest the first.

(Note he actually separated the lower part from the upper, moving Notre Dame to the right by adding a bridge arch to the left but stretching the ships to the right !) probably to position the hauling sailor underneath the large vertical spire dividing the composition more harmoniously. 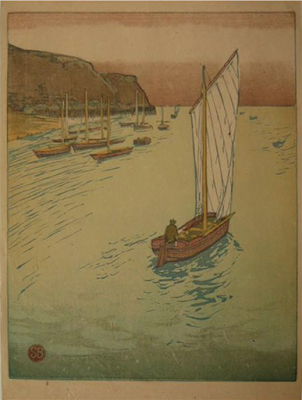 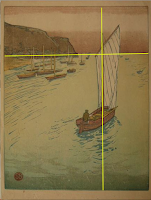 He did the same with the sailing boat print, changing the composition from square to vertical. In this case by adding an inch or so to the bottom with an extra block. 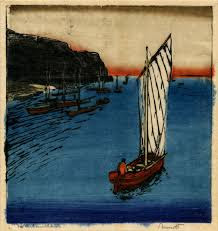 And then it struck me I could hardly find two identical prints of the same print/composition (there are, probably when he was content printing an edition) showing he experimented happily with his blocks. 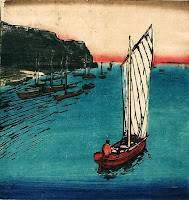 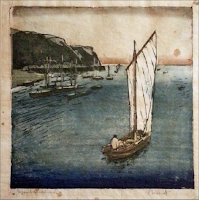 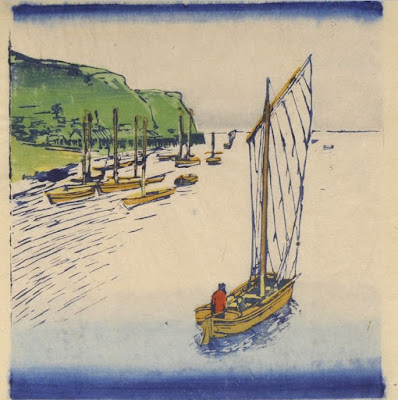 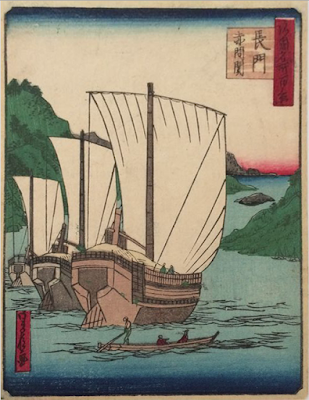 Some serious research has been done into the Japanese prints that inspired Vincent van Gogh (1853-1890) and comparing is besides great fun revealing much about the artists history and history of Art. 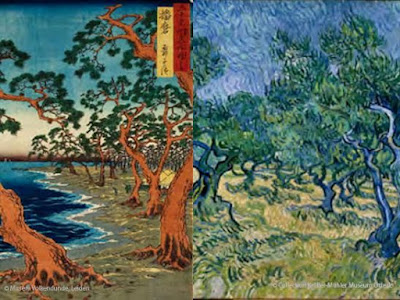 In Scotland-Edinburgh I suspect Berndt will have met Frank Morley Fletcher (1866-1949) who was head of the Edinburg college of art from 1907 and before he had been experimenting, like Berndt, making prints in the Japanese way in London. Around the time Orlik came back from his Japan experience in 1901 and moving from Munich to Berlin. 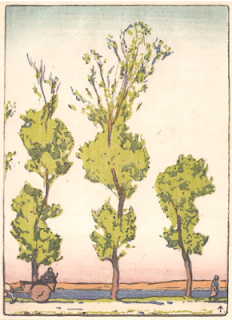 Experimenting Berndt did with almost all his prints. These are just examples that I managed to find and safe, there must be many others available. Here's a 1911 print showing a Polish village and landscape in different colors which made me think of Fletchers print made in 1916. 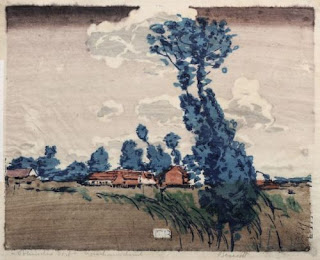 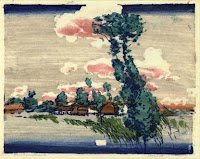 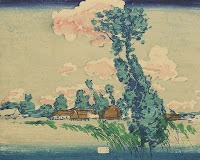 Please consider these are just personal observations and in no way to be valued having  any art historical relevance. And beware: there's even more to come ........... 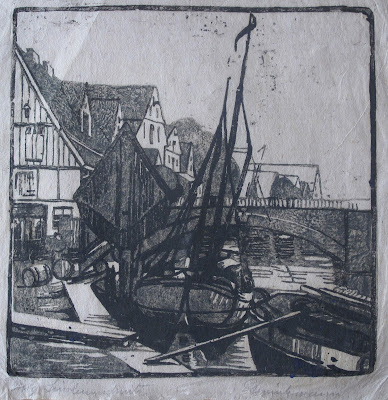 Recently I stumbled over this fumbled black and gray woodblock sheet. Just  two blocks were used to create this print with great perspective and composition ! Faithful reader Wolfgang helped me to read the signature: "Gleichmann" leading to this new to me artist and a new entry in my ongoing project: the German Women early printmakers index.

Studying in Berlin 1908-1912 and working in nearby Potsdam until 1918 she could very well have had acces to Emil Orliks printmaking classes. Just this morning in German Ebay this Orlik black and gray print appeared: "Eislaufplatz".

I would very much like to know which harbor or quay the artist is showing: Potsdam, Berlin, Hannover ? There's a very interesting contraption shown over the barrels being unloaded. A sheltered hoisting device ? All help is welcomed.

Started painting as a child, studied 1908-1912 at Breslau “Kunstakademie” followed by studying philosophy, literature and history of Art in Berlin. In 1915 she married painter Otto Gleichmann (1887-1963) whom she’d probably met while studying in Breslau working until 1918 as a teacher in Potsdam and Hannover. Joined with her husband the Hannover Secession in 1918. In the mid 1920’s she co-founded the painter group GEDOK in Hannover serving as board and chairwomen. She stopped working as an artist during the Nazi regime while her husbands works was declared entarted (degenerate). Most of her work was destroyed in the allied bombing of Hannover. Exhibited in Düren (1915) and Bielefeld (1917) and in the 1920’s in Oslo and Switzerland. In 2016 a print of an unloading barrels sailing vessel showed up in German Ebay, signed “Gleichmann”, most probably by her hand.

Key figure in German expressionism. Studied in the Academies of Düsseldorf, Breslau and Weimar. Served actively and was wounded in WW1. He produced oil paintings, watercolor paintings, sketches, lithographs and pictures in mixed media and worked as an art educator in the “Realgymnasium” in Hannover. His works from the 1920s and 1930s were characterised by his bad experiences as a soldier (1915) and his injuries (1916) during the First World War - and his belief that the growth of National Socialism was a bad thing. His early work (lithographic port folios) was published in 1918 by Paul Cassirer in Berlin. He took part in the Hannoversche Sezession from 1918, where he met Kurt Schwitters (1887-1948), among others, and became friends with poet and cultural critic Theodor Däubler (1876-1934). His exhibition was banned, and his art was declared “entarted” (degenerate) in 1938. 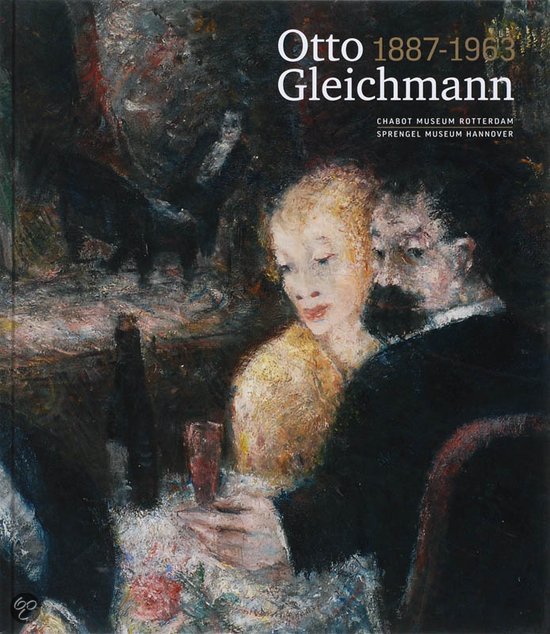