Thanks to reader Brian Merrony today the mystery of the 4 free poster prints ("after paintings by JHT") is now completely solved and illustrated. Thanks to Lily from the Japonism Blog after discovering the My Home Magazine November 1929 connection, of the first two prints. 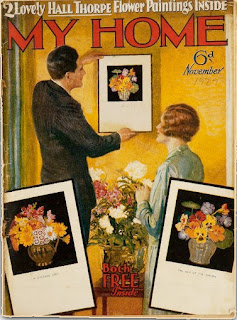 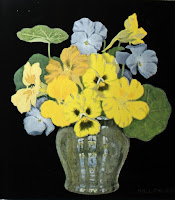 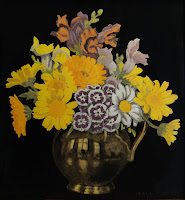 Today with finding a copy of My Home Magazine 1933 (with the two original prints still in it !) this mysterie is now completely documented. 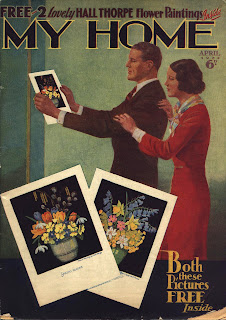 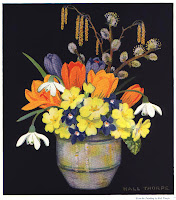 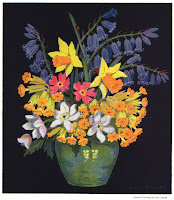 Brian "by the way" sends his other JHT prints for sharing on the Linosaurus. And one he saw in the collections of the Victoria and Albert Museum in London. To my surprise I have to admit I have never seen this Tulips in a vase, very similar in composition to the "Chines Vase". 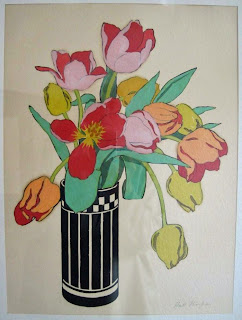 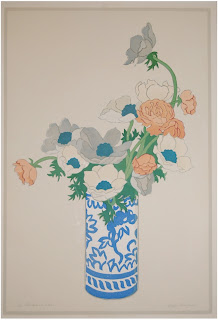 The other print is called "Anchusa" showing this wild plant with a butterfly. JHT must have had some good botanical knowledge because the Melitaea Cinxia or the Glanville Fritilaria he probably depicted here is often seen feeding on Anchusa Officinalis or Common Bugloss. The butterfly commonest in the South of England (region Portsmouth-Bournemouth-Isle of Wight) 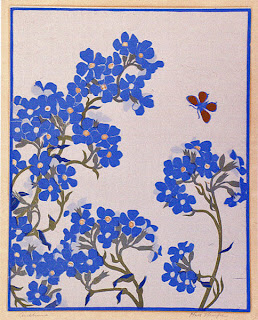 Completing this update on the Flower prints by John Hall Thorpe I share with you this last find, sadly it's only of thumbnail dimensions, but I had never seen this great little "Anemones" before either. This week I received another colour example of Cincinatti artist Davira Fisher (1918-) woodblock printing art from American reader Bob Lung (see posting on Davura Fisher May 17th 2011)
This artist proof print titled Skyward has been hanging on the mantle and was  enjoyed for decades by Bob's aunt. He assured me, now he recently inherited the print, it will continue being appreciated in his home. Trying to find information on the Internet (which is very scarce) he stumbled over the Linosaurus and offered this print for sharing.
Thank you Bob. 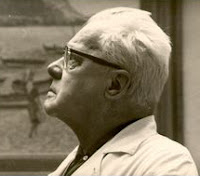 This time it was myself discovering the printmaker of the Jungnickel/ Bresslern-Roth blue and yellow Ara (Speaking of parrots) (from an edition of 75). And I found another copy and another print, a cockatoo (from an edition of 100) in an old auction catalog. The Parrot the obvious winner. 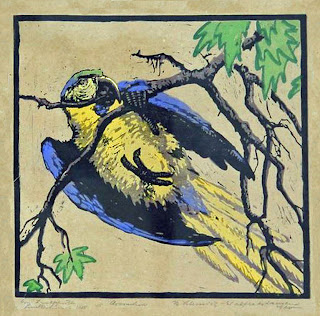 After his classical high school training in München Karl Schmidt-W. son of a doctor, was destined becoming an architect and was trained as such in Nürnberg. With his artistic talent he afterwards visited the renowned München Kunst und Gewerbeschule (Arts and Crafts school) becoming a versatile artist in many mediums including mosaic decoration. 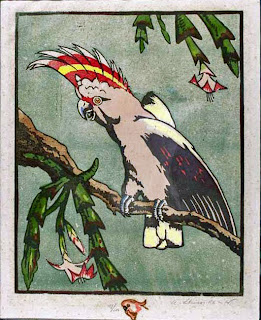 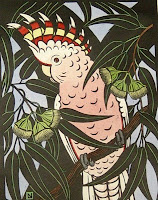 Settling after the horrors of WWI and living from 1923 with his wife in Nabburg (a small town in Bavaria, north of Munich) where he was to become a very respected artist until his death in 1971. His house, decorated by himself now a museum to all the work he's left to the city of Nabburg (6000 inh.) 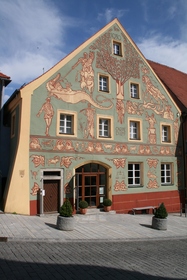 These two prints were made in linocut in 1922, a medium he probably abandoned in his later career. I am curious who might have been his teachers, inspirators and fellow students in München before WWI and anxious to know if there are more prints around.
Geplaatst door Gerrie op 14:26 4 comments:

I had seen once one of these two very nice (1922) woodcut prints. Paying a virtual visit to the Auckland Art Gallery Toi o Tamaki, and doing some investigating I found another one in their collections. A great and to me still incredible way of travelling these days.

When I was there and looking around I found also this great (1919) lithograph: St. Matthews by Night (Auckland): a very serene picture and what great blues.
David John Payne emigrated to New-Zealand in 1908 (aged 26) after having been trained in the Birmingham Municipal School of Art. And this (below) is how he would've known and seen St. Matthews, from the N.W. from Wellesley Street. Payne choose his view from the East. Showing the aisle and chapel too. Maybe he even lived in those quarters. The area (block) has now completely changed and build up with high rising buildings.
Although the church on the hill is pretty much the same, the city (and traffic) around it has changed beyond recognition.


In Birmingham exhibited in the late 19th century David Payne R.S.A. (Annan (Sc.) 1843- 1894 Sheffield). He left Scotland and lived in Duffield and later in  Barrow up on Trent, not that far from Birmingham. He was quite succesfull and prolific, not only professional: he (and his wife) procreated 14 children. But David John being not one of them. According to the 1891 census.
Geplaatst door Gerrie op 14:43 2 comments:

Doing some research for future postings I stumbled over these great six macaws by not a printmaker but painter Meriel Cooper Wallace (1982). It was on display in Bahrain in 2010 were she apparently works and lives. So I learned from a 2008 edition of Gulf Weekly. English, born in the USA, and spending her youth in Kenia. That's all. No more pictures, nothing, nada. Would love to see more (and have a better/sharper parrots picture. This one was taken by an exhibition visitor).
Geplaatst door Gerrie op 11:07 2 comments:

What is the chance of finding a fine and typical North Devon fishing village woodcut print in a Dutch second hand and antiques shop? I had to do some real "excercising the little gray cells" trying to remember were it is. I've walked there, I've stood there and made photographs there. In the 1980's. It's ofcourse Lynmouth on the Nort Devon coast. 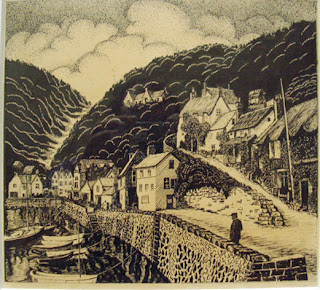 The printmaker monogrammed his initials H.J. in the dinghy in the lower left. The same little boat seems to be anchored in precisely the same spot in the 1955 photograph below. He obviously changed the tides. Please help me identify him. He was very precise in realistically cutting and printing the view on Lynmouth harbour standing in the corner of the pier. A tourist and a Sunday stroll view. An artists view. A photographers view. And an icecream sellers and chocolate box painters view. 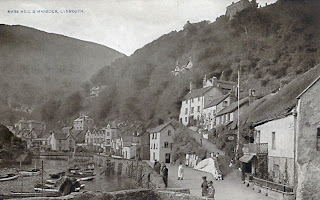 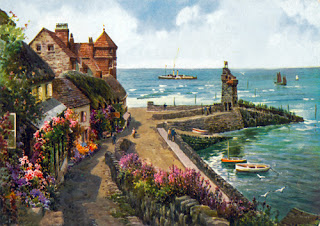 
And Kevin Walsh (born 1950!) stood here. But more recently as is suggested by this wonderful Happy Days nostalgia painting (enjoy more of his great art here).
Alan Tyers (born 1944) was here recently too, although painting from the other side of the harbour. In a silkscreen print style.
Probably on the same spot were Steve Pleydell-Pearce created this very nice and "different" view on Lynmouth Harbour. I couldn´t decide between the study and the real painting so I give you both. Great palette and fresh use of colour.

And since you now have been here too, don't forget sending me the printmakers name.
Geplaatst door Gerrie op 17:10 2 comments:

While looking at parrots in the last two posts and going over my Personal Parrot Print Pictures files I came about another two examples, this is a nice opportunity showing them. 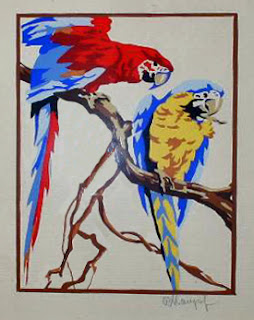 R. Kampf, "pochoir around 1930". I found this picture after the item was recently sold on Ebay, cheapish (not very expensive), and no doubt to one happy buyer. The printmakers identity to me a mystery. (I did some picture polishing with PS because of bouncing flash right in the centre) 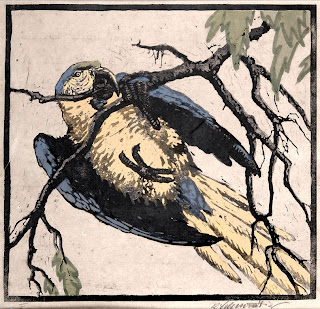 And this dynamic blue parrot very much in the best Austrian Jungnickel-Bresslern tradition and style. From an older auction catalogue. Dated 1921, and signed by one R. Schmidt. A very able but also mystery printmaker. 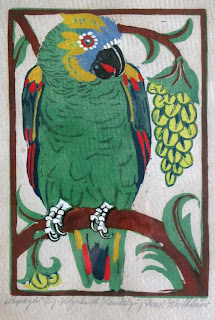 This artist working from the city of Bielefeld is only known to me by this hand pulled woodblock print ("Papagei, original Holzschnitt Handabzug") occasionally turning up in auctions.
8 blocks were used to create this colourful beast and grapes from an unnumbered edition but I've seen a copy numbered 88/150.
More information and examples of his work would very welcomed.
Geplaatst door Gerrie op 09:32 No comments:

This is a result of feeding Google with these two words. Linocut + parrot in German. I haven't the faintest idea  who made these two prints, 31 x42 cm and printed from three blocks. This is the link to what seems a collective outlet of contemporary artists' work. Would very much like to know who did these (in editions of just 10).


Added information: They are by contemporary German artist Anja Baier as reader Jürgen (see comments) pointed out to me within 12 hours after editing this posting. 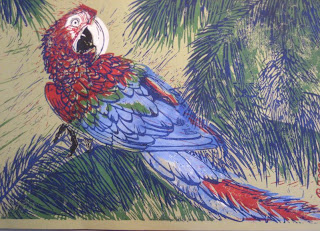 I just happen to love wood- and linocuts with parrots. Googling you'll find the obvious Heinrich Jungnickels, Norbertine Bresslern-Roths and some Martin Erich Philipps. However not one Fritz Lang in the query. But a handful of others which I will show in due time. But these are actually quite good, maker unknown. He or she capturing the nature of these noisy and busy birds in a new and fresh way. Using only three blocks.  And not just static, sitting, posing and modelling on a branch but active and surprisingly dynamic. 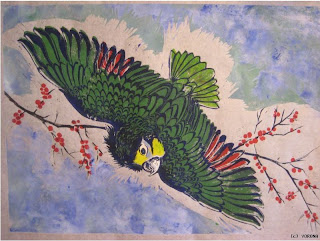 
My activist brain missed the buttons and connections in that German website completely. Thank you Jürgen !

I recently read in a publication that scientifique research indicated modern Homo sapiens (we, us) making decisions on impuls made no poorer judgements than the ones making decisions after careful consideration and calculation. So much for the development and functioning of modern human braines. Thus reinsured and backed-up with this new insight in mind I made an impulsive phonecall this morning after finding "Resting Tiger" in a local Internet market.

It took me an hour and 80 miles of impulsive driving after a quick morning's  coffee meeting Gérard. Besides meeting Gérard I am now very pleased with my new acquisition. I really haven't a clue who the maker is. There is maybe something colonial or Indonesian about it. The tiger most probably Sumatran (Panthera tigris sumatrae). 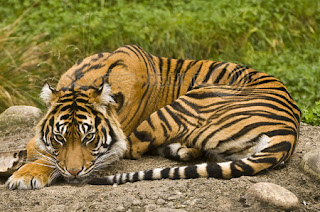 It has been framed in Amsterdam and the only thing I can decipher from what is left of the signature is the beginning letter G or (J) + a short family name and ending with 22.

Please agree with me this is a masterful rendering of the beasts habitat,  the Sumatra rainforest. The distribution and alternating dark and light in the print is superb and the soft tones of gray in the animals fur very delicate. And it's big: 23 x 47 cm !
There were some specific animal specialist artists in the Netherlands in the period but mostly in drawing, watercolour, oil or pastel. The only great woodcut animal specialist I can think of is Samuel Jesserun de Mesquita (1868-1944). 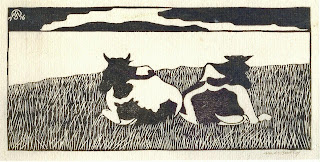 He did many (Zoo) animals but to my knowledge he didn't do tigers. Besides his approach is far more stylistic and he left always a very distinct marking in the block. I promis I'll do a posting on him soon. So if it isn't him, who could be ?
Cornelis Jan Mension (1883-1950) drew some great, even resting, tigers but he did not  make prints. And thinking, looking and researching I found this great tiger print by English printmaker John Dickinson Batten (1860-1932) but now I am definitely slowly slipping away from the subject. 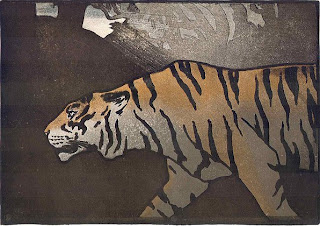