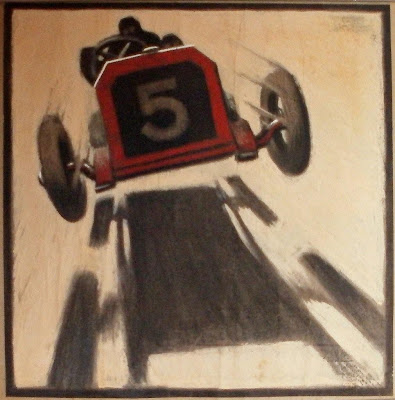 A few weeks ago I received a friendly email with some goodies attached from Blog reader Konstantin, who inherited from his father several, a collection of prints by Carl Kunst. There is also a family connection to this artist. Today I'ld like to share one of them because I think it is pretty spectacular and unique. It is also a good opportunity announcing a third posting showing even more new finds of this short lived but great poster and printmaker.
What makes this print so very special, besides capturing the action, the dare devillish speed and movement so well, the fact is it must be the absolute first woodblock print inspired by this new and daring sport: car racing. Grandprix racing originating in 1908. Here are some great photographs from that time. 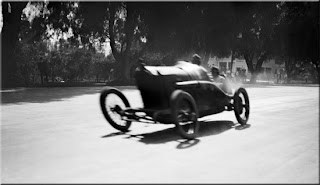 In this famous 1916 photograph people were puzzled by the oval shape of the wheels. The phenomenen occurs because of the cars' speed and the slow shutter speed of the camera. Capturing a racing car with these kind of camera's was a great achievement and must have been of great help designing this great print. As well as the posters of the period below. 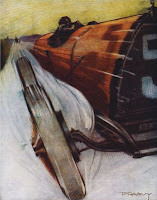 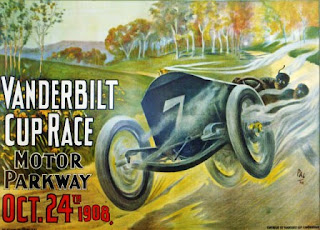 Even without a proper date the print must be created around 1905-1910 because of the untimely departure of Carl Kunst aged only 27 in 1912. The car probably German although Fiat raced with red cars in those years. Maybe a reader can help us on the make of the car, maybe even knows who is driving it (in Germany ?)
It is hard to imagine it would take another 25(!) years before British Cyril Edward Power (1872-1951) and Canadian Sybil Andrews (1898-1993) created their famous speed and racing inspired linoleumcut prints after together founding the Grosvenor School of Modern Art in 1925. 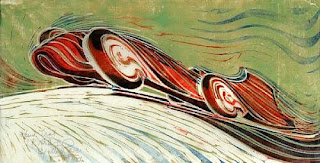 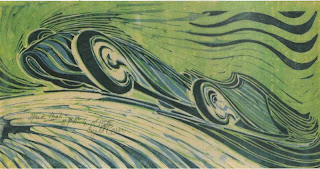 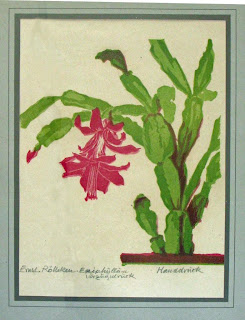 I think you’ve enjoyed the first series of Röttekens rare prints. So today I will share some more, before starting new postings on other interesting lowlands printmakers. This also allows keeping these 2 postings nicely together as a future reference. See for a reference to Röttekens more basic, widespread and popular prints here* (Link) or follow the Shop Button (above) to German Printmakers

Ernst Rötteken was born in 1882 as the second son of Fritz Rötteken, veterinarian and equerry to the last King of Hannover George V (cousin to Queen Victoria). His father build a large family house within the walls of the old city of Detmold and Ernst, after finishing the Detmold Gymnasium, started his studies at first following courses in Botany.

His knowledge of plants would later be of great help and value to his before mentioned endeavour allowing ordinary people to buy and own “real and good art” to decorate their houses instead of the kitsch and rubbish they were accustomed to and for whom his big landscape oil paintings were financially out of reach.

It was the same thought Vincent van Gogh wrote to his sister ”What I really would like to do is to paint for those who have no knowledge of artistic values”. 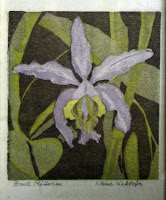 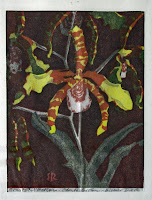 Rötteken originally was trained in traditional German landscape painting as a classical painter in Düsseldorf and later Karlsruhe Kunstakademie. And he was to become the leading and very successful painter of the Lippe landscape.

It was not before 1928 Rötteken, now in his mid 40’s, started his career as a woodblock (linoleumblock) printmaker after successfully trying and publishing a map of lithographic landscape prints in 1926. In his heydays his technically well made and well designed aesthetic flower compositions were ordered and sold in some 450 art shops in and beyond the province of Lippe all over Germany. The same method (flower prints, catalogue and selling points) of selling art to the "masses" was followed by contemporary Dutch printmaker Arie Zonneveld (1905-1941) whom I mentioned in this Blog many times before. Curiously both printmakers each created some 50 prints in their lifetime, but Zonneveld (although very short lived) created also some miniature landscapes which I've planned showing soon.

Both printmakers, to this day, are still very much appreciated and loved and are again collected by print enthousiasts not restricted to Lippe or Germany but because of Ebay and the computer all over the world. 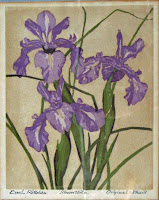 It takes a lot of time and research composing these articles. Leaving a comment, corrections or suggestions after reading therefore is always very much appreciated.


Some postings have been visited and consulted (borrowed and used !) over 900 times. Without leaving a single notice.


If I wasn't convinced you were probably very busy and forgot to, it could easily be interpreted as not very polite. 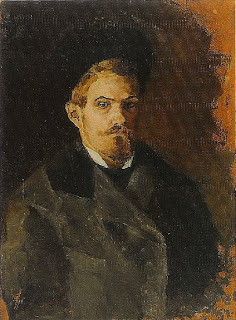 
(< self portrait as a young man 1902)
The colors in this print below, "Echinopsis", make a nice bridge to continue after the colorful world of Matt Underwood's prints in last posting. Today I make a start sharing some very rare and probably never before shown or published flower prints by Ernst Rötteken (1882-1945). 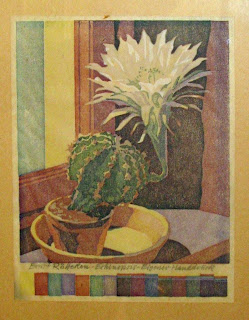 I have so many nice things to share and show I'm afraid it will have to be in two separate postings. The above print, probably a proof, showing all (15 !) hues used, proving Rötteken, like Matt and Kandinsky, knew too. About the Japanese colors and hues. 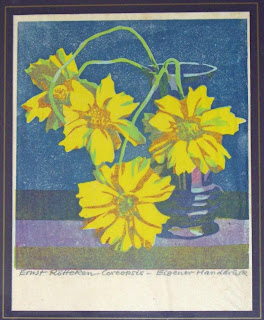 Rötteken was a local printmaker in the Province of Lippe, living in Detmold the  provincial capital of the once souvereign Princedom of Lippe (Westphalen) in the hills and mountains of the Teutoburger Forest, were in AD 9, fierce Germanic tribes beat and stopped the advance of the Roman Legions. Rötteken produced his prints with the philosophy that by creating woodblock prints of his flower compositions the affordability put Good and Aesthetic Art into the reach and houses of the middle classe people of Lippe. 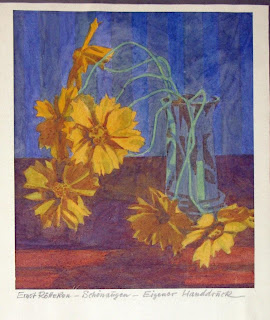 Judging by their popularity and numbers of (unnumbered) prints many if not every middle class house in the province Lippe region was decorated with one or more of his prints. He was a well loved and respected artist, who experienced that prints of locally unknown and exotic plants like "Kamelie" didn't sell. 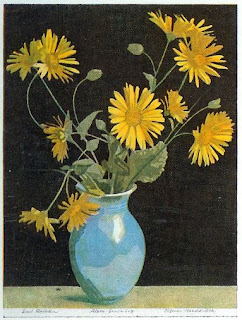 It was "Goldregen, Roter Kaktus, Osterblumen, Sonnenblumen, Apfelblüten und Enzian" the Detmolders understood and wanted. So pernickety they were that prints like "Osterblumen" (Easterflowers) were not displayed in winter.
See for these most and well known prints by Rötteken the Linosaurus Bazaar/Shop section following “German Printmakers” and you'll find a reference to these prints. Follow the button above or this use this link.

But these very unknown and rare prints however I enjoyed and photographed at my friend Hubert in Detmold when I visited him last spring. He is the greatest expert on painter & printmaker Ernst Rötteken and was one of the initiators of an exhibition of Röttekens work some years ago in Detmold.
These are his early prints as well as experiments with form, design and color. Like in these three different prints of "Euphorbie". 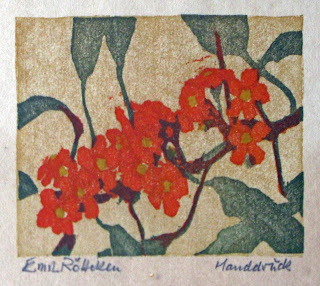 Rötteken, relying for his bread and butter on his painting and printmaking had a small, 20 pages, cataloque made and installed at the regional better art and design shops and frame makers. It is sometimes on Ebay and holds 36 of his popular prints (to be ordered) and mentions 14 more prints in preparation (but some were never executed). In 1:4 miniature. 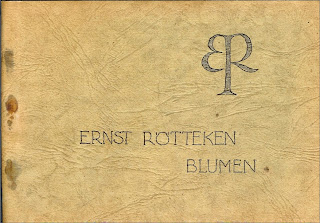 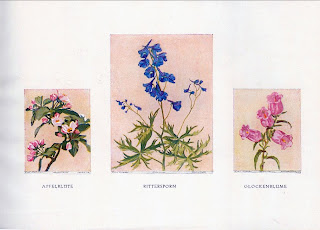 
It takes a lot of time and research composing these articles. Leaving a comment, corrections or suggestions after reading therefore is always very much appreciated.
Some postings have been visited and consulted (borrowed and used !) over 900 times. Without leaving a single notice.
If I wasn't convinced you were probably very busy and forgot to, it could easily be interpreted as not very polite.
(Please consider that borrowing and using these unique pictures makes one very traceable.)
Geplaatst door Gerrie op 15:23 4 comments:

How come some pictures seem to stick more easily to the mind and memory then others? The answer lies probably in the way how the brain functions when storing information in the memory. Pictures are a most powerful form of information.
You’ll have to intensify your casual glance into some more serious prying to help emerging from the blotches of color two of these very beautiful, almost exotic, but commonest of garden birds. The title is also not making it easier and  consumer friendly for your brain. Unless you’re French. Carduela Carduela, also called Gold Finch and Thistle Finch. Chardon, French for thistle. Hence the Chardonnerettes. Little thistle dwellers. 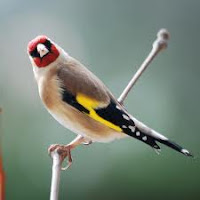 By now the image will be firmly stored in your brain. For eternity probably. Try again with next "Demoiselles".
Ready? But there’s really more to it. Besides the form, the blotches of color, there’s also something familiar and comforting with these colors and their combinations used by Matt in his paintings and printmaking. Here's (in this link) is some great insight and explaining. And I'll bett, by now, you've completely missed the 3 damselfies (in three very clever different views of perspective) and the flowering irisses in the above print. It's because you, like me, were focusing on the kingfisher (fr. Madame pêcheur). And the Title didn't ring a bell either. Demoiselles, Damselflies. There's more to Matt as there's more to each of his prints. He is also a keen birdwatcher, botanist and naturalist. And has a good sense of humour.
Look again carefully: there is a surprise hidden in these poppies
(two surprises actually)

These colors (hues) are literally "all over the place" in the 1904 Panama-Pacific Exhibition in San Francisco and it has everything to do with Japonisme  (Link) Thanks to Jules Querin (1860-1922), please, do read the small but interesting article in the Link), designer, lithographer, colorist and illustrator. They are the traditional Japanese color combinations (as in real life not real harmonies) used for centuries in Japanese art and design.
Influential Art teacher  Pedro the Lemos (1882-1945) knew. And it is of course also the pallet of his teacher and Godfather of Modern Printmakers Arthur Wesly Dow (1857-1922) and that other student of his William Seltzer Rice (1873-1963).

Modernist Russian/French artist Wassily Kandinsky (1866-1944) became fascinated and was caught by abstracted forms, light and color at his girlfriend’s, German painter and printmaker Gabriëlle Munter (1877-1962). He quite revolutionary invented and combined expressionism with these color combinations into painting and printmaking. Compare his above Oriental Musicians with Matts Chardonnerettes. And wonder.
So a very distinct line, an artistic umbilical cord, can be drawn from traditional Japan through the earliest of Modern Printmakers, through the birth and developpement of expressionism to contemporary British printmaking.
With Matt’s permission and cooperation I share with you some of his wonderful prints today. He obviously (and actually) is acquainted with that other icon of British contemporary printmaking Robert Gillmor.

Grandpa Ott (L.) and  Swallows and Poppies (R.)
Matt is also participating in this recent book: Wildlife in Printmaking. Tell the family. It would make just the perfect Boxing Day present for many print enthusiasts. I've packed mine already. And here are my last examples and Matt's first ever attempt on printmaking, the Winter visitors (do look them up in any birdbook, it's november!) And Irisses (do look for the 2 surprises)