Readers will have noticed the break in new postings. Reasons: busy, circumstances, preparations for publishing "The Mother of all Books" on German women artists born in the 19th century pioneering with woodblock printmaking 1900-1935. And several more reasons. I was pleased to see the number of "followers" during this break even went up a few: a stimulus to resume.

So, today I intend to resume regular updating with new postings. Yesterday a wonderful email was in my in-box, 3,5 years after the original posting on German-American artist Fred Goldberg. There had been earlier comments (do read them) but this one was very special. So here is: 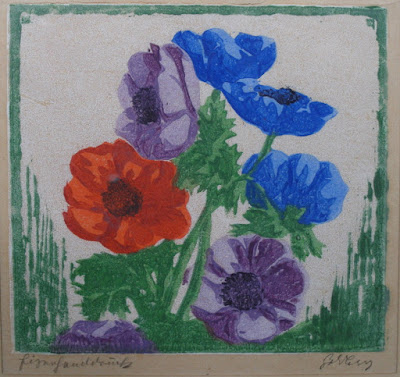 and this contribution by Steven Less:

After seeing some of my late father's work, an art professor asked me if there was any connection between him (John Hans Less (1923/24 - 2011) and the artist Emil Orlik (1870-1932). Quick research on Orlik revealed that he died while my father was still in grade-school in Berlin. While Orlik had apparently lived and worked in Berlin for many years, and had been in Asia to learn something about woodcutting techniques, etc., and recorded some of his impressions and incorporated the knowledge he acquired in his work, all of this happened long before my father had any inkling that he would find refuge from Nazi persecution in Shanghai. So, I couldn't imagine any direct link.

Then I started to wonder about my father's teachers, who may indeed have been influenced by or at least knew of Orlik's work. This is where, thanks to your website I encountered Fred Goldberg's art for the first time.

After my father lost his internship position at a printing company in Berlin, where he was being trained to do lithography when the firm was Aryanized, he was briefly able to take private art lessons (in 1938 or 1939) with Fred-Fredden Goldberg. He later had contact with Goldberg again in Shanghai.

Like Goldberg, my father immigrated from Shanghai to the US after WWII, but in contrast to Goldberg, he ended up on the East Coast. There, he found work as a layout artist for Bambergers' department store, eventually becoming the Bambergers' dept. store chain's VP for advertising. After retiring, he devoted himself to painting. My father never forgot his experiences in Shanghai and during the 1990s he did a series of watercolor drawings intended to illustrate a written memoir and based on original sketches he drew in Shanghai. 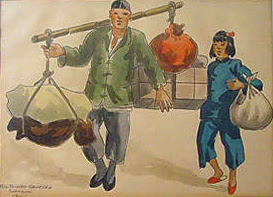 To honor my father's memory and commemorate others from among "the drowned and the saved", I've arranged for exhibitions of his Holocaust- and China-related artwork at the Jewish Museum of New Jersey and the Gaelen Gallery in NJ, as well as Bensheim Museum and at the Heidelberg city archives in Germany. For samples of items included in these exhibitions, see the following websites: