This posting was updated 17th march 2012 with new information
*here*
At first glance this looks like a fantastic and inveracious bouquet. Daring colors, very bright and fresh like the day they were printed. It came in a great frame and the print only in need of window cleaning and a new mat. (Getting the wrinckels due to the old mat gluying, out of the very thin and old Japan paper is very costly and it really doesn't bother me too much considering it's almost a century old.)
The framers label on the back: ”Max Schmidt Bau und Bilder Glase” (building and picture glass) Bunzlau Schl. Bunzlau, now Bolaslawiec in Poland, then capital of lower Silesia, Schlesiën, until 1919 a province of Prussia. Near Dresden. A busy town crowded with shops and craftsmen, but I couldn't identify Max' shop in the old postcards of Bunzlau shopping streets.

Opening the frame revealed written instructions for (and by ?) glaser and framemaker Max Schmidt about the color of the mat and choice of frame: “gold und blau”. And a name, probably of the owner/commissioner: Kuhlendahl. The headmaster of Bunzlau Königliche Waisenhaus und Schulanhalt (Royal orphanage and School Institition) in the 1920 was named Kuhlendahl.
Identifying the flowers was a bit of a puzzle too. Under the old matting lower left was written something in old German. Finding the species and variety of flowers made the reading easier: Surfinia. As it happens a very perticular brand of Petunia: Roze Veine. Only two(!) pictures among the thousands of Petunia’s I found are Surfinia Roze Veine. An old, forgotten but spectacular variety ?
But what is the most important, I still haven’t been able deciphering the signature. Nor do I remember ever having seen similar work and colors. I need the help of readers.
Geplaatst door Gerrie op 23:10 2 comments:

Some bug or switch blocked commenting on most Linosaurus postings in June. These problems, not receiving and not being able to leave comments on other Blogs but anonymously seem both to be fixed. Feel free to return to earlier posts and if you want leave a comment. This is also the easiest way of checking all is working properly again.

Thank you Lily from Japonism  http://lotusgreenfotos.blogspot.com/ for sending me this picture of "My Home" magazine cover of november 1929, solving the mystery of these two free posters by Hall Thorpe.
Now the search is on for the magazine that (also?) gave these two away. And if there have been more such magazine presents﻿﻿﻿﻿﻿.
See also earlier postings in this Blog on John Hall Thorpe and Ralph Mott. By using the Blog search.
Geplaatst door Gerrie op 08:28 No comments:

How could I forget this lonely flamingo print by important and prolific Swiss printer Martha Cunz (1876 - 1961). She created it in 1904, the flamingo probably living in St. Gallen Zoo, esthablished in 1892 when Martha was 16. The picture is also added to the posting of June 16th.

A few days ago I received from Australia this nice email-commentary on the Linosaurus' most consulted pages: the postings on John Hall Thorpe's Flower Prints. Glenda agreed sharing the information with readers of the Linosaurus and all those interested in JHT prints.

Your three unknown prints are in order Polyanthus (c1921), The Country Bunch (c1922) and The Chinese Vase (c1920). My husband R. is the great nephew of JHT (paternal) and directly and through his mother inherited many, many prints, including etchings going back to the 1890s.

His wife died in the 1950s and they were childless, so his collection came to Australia. It was divided between his four nephews some were sold and others I suppose dispersed through their various children. Except for some of the prints displayed at home and some sold or given away, others perished over the years, as R. was an only child the collection was virtually intact and stored away in cupboards, we even found prints in the garage. So the prints had hardly seen the light of day for about 40 years.


I found that JHT printed on different papers ie. Sweet Peas in Glass Vase is printed on like a thick sort of paper, the smaller flower prints were on a shiny cardboard, others on a more porous sort of paper. Also I came across some variations of the colour of the vases, if memory serves Nasturtiuams and Sweet Peas and possibly Marigolds. Parrots and Possum was a Christining gift given to R. by JHT that has the birds in different colours.

Would you believe we even have his original letter of recommendation and introduction to England from the newspaper he worked for here in Sydney it's dated 1900.

Otto Acckermann according to the few biographical facts there are was trained at "Eschke in Berlin". This undoubtedly was naval and landscape painter Hermann Escke (1842-1900) who was awarded the title of Professor Imperial  and close enough to the German Imperial House of Hohenzollern to have his son Hans Hermann appointed German Consul General of Singapore, in 1889, so that must have been by Kaiser Wilhelm II who came to power in 1888 (until 1918). Hans-Hermann Eschke became the first full time German diplomat.
Otto Ackerman however stayed closer to home and wandered from Berlin to Düsseldorf in 1897, where he was to stay the rest of his life traveling to Belgium, Italy and into the Netherlands. He painted landscapes and Belgian and Dutch coastal scenery.
Possibly Otto A. is identical with the (G or O) Ackermann of the before posting. This woodblock print by Otto Ackermann, it is the only(!) one I could find, from the van der Grinten collection depicts Kaiserswerth on the Rhine near Düsseldorf. Sadly the signature isn't visible in this photo. German colleague painter Theodor Hagen (1842-1919) painted this romantic location too, the Ferry house and Inn on the banks of the Rhine river.
And, according to this early 1900 postcard, they were both pretty acurate.
Geplaatst door Gerrie op 13:58 No comments:

Who was the artist that created this woodblock print titled "Auerhahn" (Wood grouse, Tetrao Urogallus) ? I read G (maybe O) Ackermann but cannot find a printer by that name. It's a big print, 32 x 37 cm. with nice blues. This big and illusive bird is also depicted on this most famous Finnish (it's in the Finlands National Gallery) painting by Ferdinand von Wright (1822-1906), It's the biggest of the grouse family.
The simpleton that framed the print cut the matt too narrow and glued the print onto it thus hiding the black border margins behind the matt. Instead of creating a nice and even space around the printed area. Maybe it was ignorance or maybe it was instructed by the buyer. On the back is written "nr. 6315, No: 65 and in Silver frame". Most probably instructions for shop catalogue identification, matting and framing. It was sold (or maybe only framed ?) in the Netherlands by "the Bijenkorf". A Dutch Harrods, having a Fine Arts Department. A new, posh and very modern shopping centre openend right in the heart of Amsterdam in 1914,
with pré-WWII branches opening in the Hague in 1924, designed by architect Piet Kramer (1881-1961):
and Rotterdam designed by architect Willem Dudok (1884-1974), opening in late 1930. This great, beautiful and much loved modernistic building was distroyed only 9 years later  in the cowardly bombing raid and folowing firestorm of Rotterdam May 14th 1940. There are plans of rebuilding it. On the same spot, now housing a new Maritime Museum.

Alice Schille
(1869-1955)
American watercolorist and painter.
This small but great flamingo's print (and poem) by Alice Schille is the only printed matter I've found made by this well known American painter trained in the Arts Student League of New York by William Merrit Chase (1849-1916)

And to make more complete this posting here are some other great Flamingo woodblock prints (some of them shown in earlier postings) and posters.

Elisabeth Consentius
(Berlin, 20/6 1878 - 1936)
German woodcut printer and painter
Only 5 prints I managed to find by early German printer Elisabeth Consentius. The vase with flowers, numbered 1/30 and dated 1916, was exhibited in the "Münchener Jahresausstellung" in 1916, in the "Grosse Berliner Kunstaustellung" in 1917 and in the "Kunstpalast" in Düsseldorf. Hopefully a better picture will emerge someday.  The above photo of this print, measuring 45 x 36 cm, (replacing the sad thumbnail that was here before) was very friendly send to me on request by Ketterer Kunst Auction Houses in Germany from their archive of past auctions. Here are some other examples. 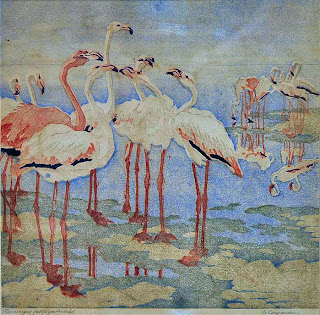 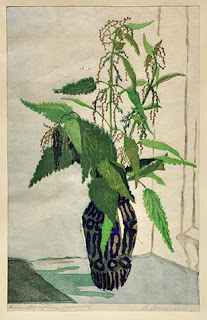 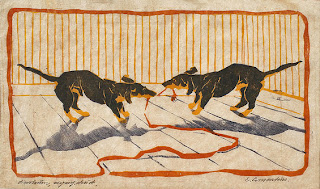 She must have belonged to the earliest group of woodblock printing artists in Germany. I am very curious about where she was taught and trained and if more prints will show up. This last one, below, with the two horses titled  “Sommer” I found in gallery specialisised in Artwork with horses. Only 30 km from my house. If you are interested: it's for sale ! 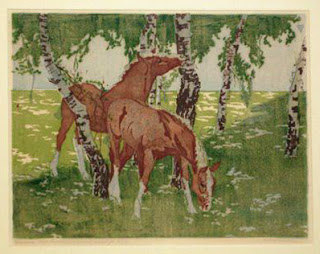 Do not hesitate sending me more information on her biography, other examples of her prints or better pictures. You can find my email adress in the profile. 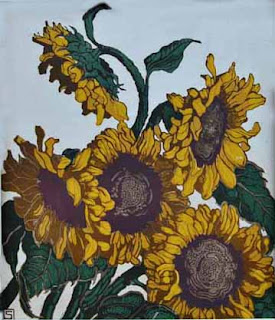 To this day I knew Lisbet (without the th) Schultz only by the one big (44 x 50 cm) Sunflowers print and this other Gentian print. Both signed and monogrammed in a square. 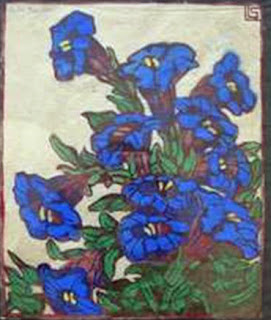 Both were recently offered on Ebay. The Sunflowers I can happily say is now mine. I just love sunflower woodblock prints. Lisbet Schultz proved to be a very obscure or obscured printmaker. I tried finding out about and investigating her before on the Internet but failed. Just this one other print I've found, a picture of a very nice and moody "lonely lady" print. In the best Art Deco tradition. Signed and monogrammend LS in a triangle lower left. 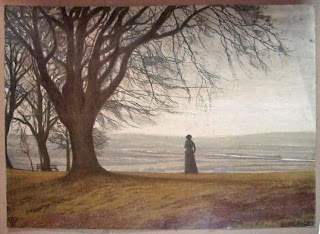 But I haven’t been able to find it or retrace again. Her prints are very much “of the period”, she must have had a professional education and surely knew examples of work by her contemporary printmakers. It wouldn't surprise me finding she was acqainted with some of the finest German printers of that time like Daniel Staschus (1872-1953), Carl Alexander Brendel (1877-1946) and Carl Thiemann(1881-1966) 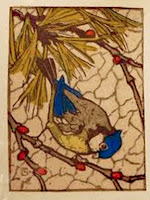 Just these three pictures. Untill today I found these thumbnails (I've fiddled a bit with in Photoshop to make them more presentable) in a Polish auction site offering these two (very crisp) woodcut prints by Lisbet Schultz in 2010. Signed and monogrammed plainly LS in the lower left. The Links for bigger pictures keep crashing. Boy, would I've liked to have a say in that bidding. I decided it's time asking readers to help combining forces and requesting sending and adding more information on the biography and hopefully more examples of the woodcuts by artist Lisbet Schultz. I am convinced she deserves it.
Send to: g.caspers@hccnet.nl
Any offers of selling or swapping prints (also by this artist) are most welcome.
Geplaatst door Gerrie op 21:05 2 comments: