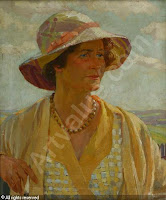 
The privilege of being a Blog writer, a Blog owner and editor combined in one person is one can do as one pleases. Without Murdochian ambitions. Like today interrupting the Antwerp related series of postings wandering off and sharing some nice discoveries that I made along my researching Verpilleux's St.Pancras Railway Station print. And finding my way in London's foggy atmosphere. Meeting some of the of the great French impressionist painters along the banks of foggy River Thames.  And some early iconic photographers. Wait untill I speculate over Verpilleux's prints "view from Waterloo Bridge" and "the British Museum" in next Antwerp School episode.


But let me first share these atmospheric impressions by some Lesser Gods of Impressionist Painting.
I am convinced I would never have known Emily's interpretation of St.Pancras nor any of her other railway related impressions. Her portrait, painted by a greater God, American impressionist William Merrit Chase (1849-1916), suggesting she was in some very good artistic company and circles. Chase frequently visited London and was besides an Impressionist a prolific and popular portrait painter.


Meeting Emily Court lead to making the acquaintance with another lesser Gods of British impressionist painting.

he also decided painting inside Cannon street Station. Like in St. Pancras here're also the waiting horse and cariages inside the station. Great painting !


born in Italy but decided to stay in London painted Cannon street Station from the other bank (also probably from Southwark Bridge).

Tom Roberts
(1856-1931)
Roberts left with his family for Australia, came back to England to study at London Art School, returned to Australia and became one of Australia's  famous and influential painters. In 1915 (aged 59) he again returned to London to work in the 3th London Hospital in Wandsworth in the War effort. Not far from were he painted in a few strokes this little Thames impression on the back of a cigar box..
Leo Lesser Ury
(1861-1931)
German impressionist painter.

German impressionist Leo Lesser Ury also visited London and I think these lesser known impressions by him match any of Monet's and Whistler's far more known and famous foggy interpretations. How much more "atmospheric" can you get? If it is painted from the Savoy or Cecile Hotel; Walker's (lead)Shot tower on the South bank in the centre. Ury loved painting "nocturnes" (Whistlers trademark) and was also famous, called a master, for painting/drawing with pastel. He made great atmospheric nocturnes and rain-paintings of his hometown Berlin and of Paris. But London: what better place to be on:
A foggy day in London Town.
(click the link above) 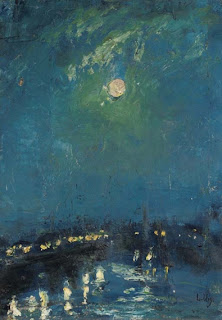 And what greater images closing 2011?
A happy New Year and best wishes to all readers.
I shall continue with Antwerp School and Emile Verpilleux first thing in

This posting is not supposed to give a complete overview of impressionist paintings of London and the Thames. These pictures I've stumbled upon and I hope you are as surprised by them as I am. And like them as much as I do.
Leaving a comment is always much appreciated and encouraging continuing in 2012.
Geplaatst door Gerrie op 21:11 4 comments:

Researching Emil Verpilleux' St.Pancras print I found this amazing photograph of St. Pancras Station after it's recent 1000.000.000 € restoration project and with consent from the editor couldn't resist sharing before continuing with Verpilleux' other prints. 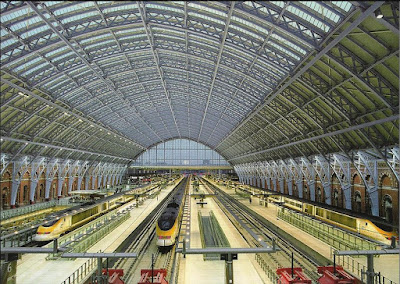 And this impression after it's completion in 1868. The largest cast iron span structure in the world. 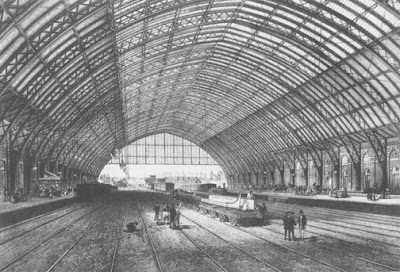 1865, the fundamental cast iron structures below standing in St.Pancras cemetery that had to be replaced. 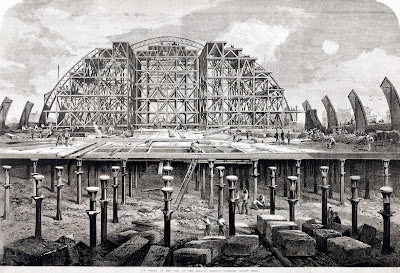 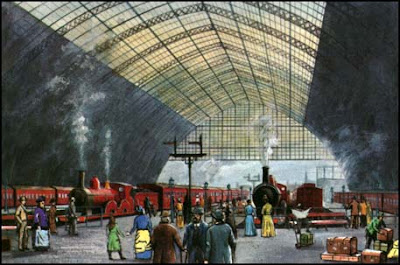 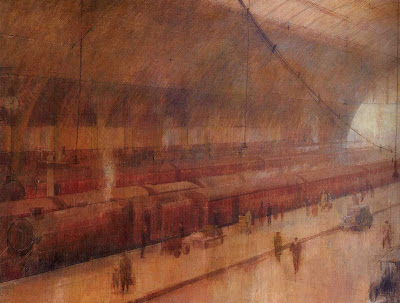 Around Antwerpen School of Printmaking (IV)

The most actual and condensed biography on E.A.Verpilleux can be found here in Art and the Aesthete. The exemplary and legendary but sadly late Blog of Clive. I can only encourage reading his great and informative posting. My postings around the Antwerp School of Printmaking are an attempt showing some things that maybe haven’t been shown or discussed before on the web. 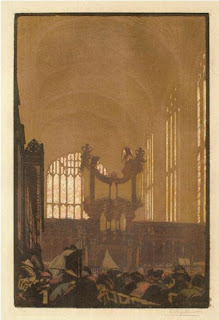 Born from Belgium parents in London Emile was trained in the Antwerp Royal Academy but  started his artistic training in London. Initially, undoubtedly, as a painter. Guessing he must have been around 18 leaving for Antwerp leads us to around 1905-07. Around the year Edward Pellens, was appointed director-professor. Again guessing he will have stayed in Antwerp for maybe 4-5 years, most students stayed 4 but Emile, because of his already noticed talents was granted a state (post doc) stipendium. We find him actually back in London in January 1911, mentioned in the London Illustrated. 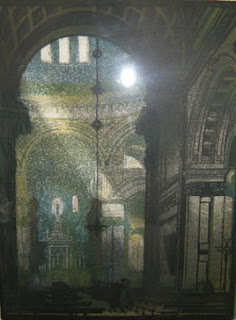 The prestigious Studio Magazine published a major article by James Bolivar Manson (1879-1945, reading this later Tate director’s biography here is a must) on young Emil Verpilleux in the September 1913 edition.  Showing “his latest” two prints in full color: “St. Pauls from Cheapside” and “St. Pancras station” both dated 1912.  Also his ”Interior of St. Pauls Cathedral”, shown in black and white, and the mentioning and praising of “Interior of King’s College Chapel”.


In some publications it is argued that Verpilleux changed from the traditional use of the Japanese baren (press), water based inks and thin papers to using a printing press, modern printing inks and thick absorbent papers. Urushibara arrived in London december 1910 giving lectures, showing the Japanese printing methods to artists and students. He returned to London in 1912 to stay, traveled and taught also in Paris. Comparing with the publishing dates of these prints I'm convinced Verpilleux  wasn't trained that way in Anwerp. Nor had he the time to master it back in London and reject it before creating these prints. But maybe someone can throw light on this subject. Also I have not been able to locate the source of this statement.


Many great printmaking artists visited London, Paris and Antwerp. Frank Brangwyn (1876-1956), Luigi Kasimir (1881-1962) and Frantisik Tavik Simon (1877-1942) for instance. They surely will have had greater influence on the young Verpilleux. As I intend showing you later.
Verpilleux' St.Pancras Station print must have been inspired by Claude Monet's Gare St. Lazare painting (one of its versions). Most Impressionist painters (and the post Impressionists) visited and painted London and the Thames.
Besides the achievement of great atmoshere in this print (that was after all the starting point of this series) it is incredibly detailed and acurate. Verpilleux showing both his skills as a classic taught wood engraver in Antwerp but also he already is a very modern block-printmaker. These contemporary photographs proving. The perspective, the hurrying crowd, the structure of the station and the impressionist atmosphere are created with the greatest skills and great knowledge of using color (and inks and paper). Acccording to J.B.Mansion in 1913. And he was besides a critic also an accomplished artist. 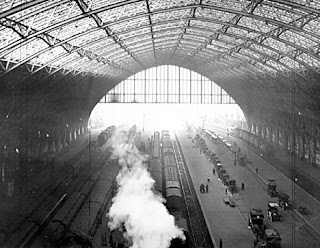 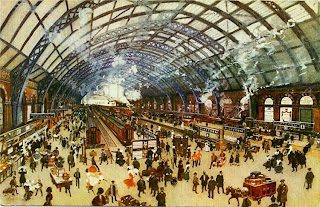 To be continued soon. 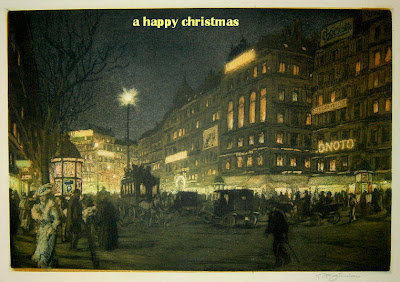 Both my main subjects and starting point of these series of postings, printmakers Emile Verpilleux and Henri Wils were taught in Antwerp at atelier Pellens. Wils at least "claimed" he had been inspired by Auguste Lepère. Verpilleux, although I could not find a quote, has Lepère written all over his wonderful prints.


So I’ve taken the burden upon me to pay attention to the great Auguste Lepère. Without consulting textbooks, dissertations (there are), collection catalogues (there are) nor any scholarly (I haven't on this subject) background. As Charles (of Modern Printmakers Blog) put it very to the point: "all information gathered from the Internet is at best superficial". And he is totally right of course. Nevertheless, warned but undaunted I’ll continue this personal account of my internet investigation. Facts and pictures. No harm in there.

In Paris between 1840-1880 flourished the reproductive studio of Joseph Burn-Smeeton and Auguste Tilly. In spite of his name there’s not much known about Smeeton. Dates (undoubtedly taken from accountable sources) are only given for his working (productive) period: 1840-1880. The composite family name Burn-Smeeton was created with the marriage of George Smeeton and Mary Burn.  In 1774 in St. Martin in the Fields (Br.) probably Joseph’s grandparents.

The studio in Paris must have been a success because they even engraved the world famous Waterpoort, build around 1500 in my hometown. In Friesland. Nothing much has changed on that location in 400 years. (all pictures are mouse click-able)


In 1862 Auguste Louis Lepère was accepted as an apprentice just 13 years of age after being taught (probably the basics of engraving) by his father, the Paris sculptor Francois Lepère. Auguste was to become one of the greatest French artist of the 19th century and world famous already during his life, because of his remarkable wood engraving skills and technique but particularly for the atmosphere he was able to create in his engravings, etchings and later for his pioneering and inspiring modern printmaking.
But here, at atelier Smeeton, he received his basic training as a wood engraver.  In studios like this all over Europe paintings of “real”, creating artists, were copied in wood- and copper engravings, and designs for books executed.
In 1889 Lepère, following the advice of his friend, the painter and etcher Felix Bracquemond (1833-1914), took up etching and his career as a free creating artist took of. Experimenting with color blocks in woodblock printing, combining wood engraving with woodcutting and blockprinting.
It’s always these same few but great color prints turning up (on the www) but how fascinating they are. I wonder if he did any more.

Lepère almost always places people, action, in the front of his compositions. In new, difficult and daring perspectives. Always with great care for detail and composition. Always active. Often against the light, as any photographer knows, encreasing drama and atmospheric effect. The merry go round (what brave positioning and sectioning) might even have been an inspiration to American printmaker Frances Gearhart (1869-1958) * Lepère was also very famous in America. 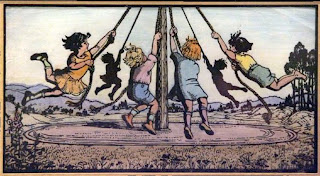 There’s always a lot to see and discover in Lepère's prints. With all his skills and experimenting he was able to create atmosphere and temperature, in his etchings, engravings and in his pioneering color printmaking. Impressionist printmaking.


The staging of a silhouetted (back-lit) but amazingly detailed and always busy crowd in the foreground was probably Lepère's invention and it was eagerly borrowed by Emile Verpilleux. Greatly increasing drama and scale very effectively. There's a story told in the lower 3 cm. Hurrying, sheltering, weeping, travelling, commutering, praying, visiting, sunday afternoon strolling people. The other 95% is an impressive stage setting. These prints both Lepère's and Verpilleux' are not decorational. Every print is like a play.

This, the low viewpoint (the eye level of the seated sketcher?) and the delicate building up of a just few faint layers of shade or colour in most of Lepère’s work also can be found in Verpilleux's. The choice of the subject (great rivers, great city views with ornamental buildings, cathedrals, bridges, squares and market places) and the time of day greatly attributing to create not an effect but a perception of greatness and atmosphere. Transferred onto a piece of paper.
If Lepère was the God of Modern Printmakers, Verpilleux must have been his son.


Next: Emile Verpilleux, a wonderful perception of greatness and atmosphere.