What do these two women, born almost a century apart possibly could have in common ? 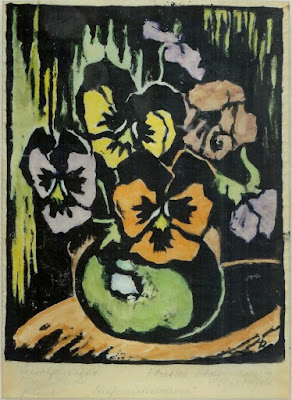 In my collection was for a long time this unspectacular violets print. Scribbled in pencil: "Linolschnitt, Handdruck, Gefarbt" and titled "Stiefmütterchen" and signed Hertha Hoffmann-Rudolph.

Violets in German are called: "Stiefmütterchen" (little stepmothers). Because it needs so little care and  thrives on neglect. (note: not all stepmothers being bad mothers).
I found just one other example of a print by very unknown Mrs. Hoffmann. Researching the artists trying to compose something of a first biography was until recently without any success. She is not mentioned in any of the artists lexicons nor in Dresslers "Kunsthandbuch" 1921 or 1930 (last edition). She was probably still living in 1959. 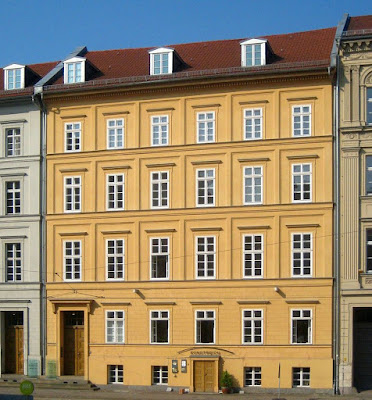 But recently I did find found a small clue, in Berlins 1943 "Adressbuch", the last before old Berlin was thoroughly destroyed in the aftermath of WW-II: she lived at Kupfergraben 6. Which surprised me because this is a very special location in Berlin. It is the entrance to and located opposite one the worlds finest Museums: the Pergamon Museum. 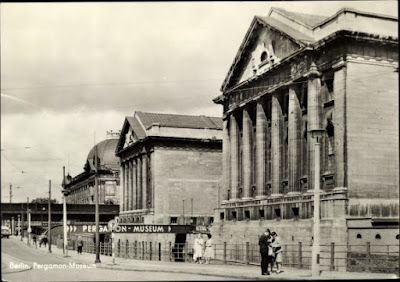 Paris has its Île de la Cité and Notre Dâme but Berlin has its "Museum Insel" housing 6 of the worlds finest Museums. + the Berlin Dom + the reconstructed Castle (Schloss).

To answer the question: Berlin Kupfergraben Nr. 6 today is the (guarded) private quarters of the Worlds most powerful woman: Angela Dorothea Merkel (1954): Germany's first woman Chancellor since 2005. To proof there's alway a nice story to tell even when an artist is so obscured as Hertha Hoffmann-Rudolph.

All help from readers and passers-by and any information on Hertha Hoffmann-Rudolph is warmly welcomed and still can be included in the upcoming publication (next post).

All pictures borrowed freely from the Internet for friendly, educational and non commercial use only.
Geplaatst door Gerrie op 11:39 No comments: