Annex collecting "Holzschnitte" and continuously researching the biographies of German women printmakers born in the 19th century, on rare occasions opportunity knocks: finding and actually being able to acquire something special: an etching, lithographic drawing or a painting. Knowing my special feelings for this particular Berlin printmaker it was made personally known and shown to me by friendly Berlin gallerist and printdealer Thomas in Berlin recently. 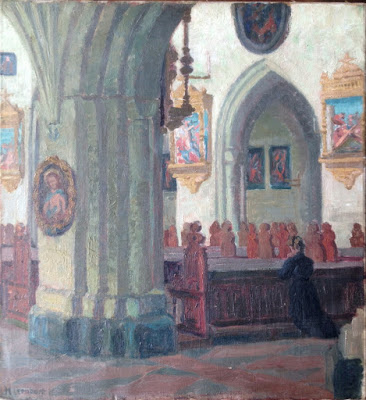 This oil painting of an unknown church interior was painted by Berlin printmaker Helene Isenbart (b. 1864- d. in or after 1927). Almost without exception "our " women printmakers happened to be wel trained and accomplished painters) .
Thanks to a very friendly and helpful reader of this Blog, who prefers to stay anonymous, we now do know the location. 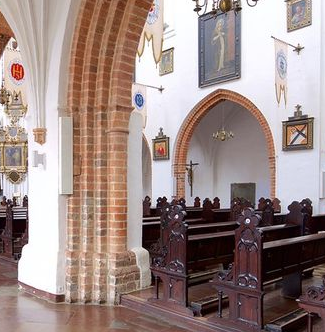 Helene Isenbart choose Danztig (then capital of West-Prussia, now Gdansk in Poland) Oliwa Cathedral for her interior. It is most famous for its splendid organ. 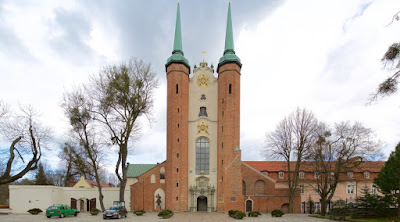 Thanks to this very attentive and friendly and also Berlin helper we can stand where the artist draw and sketched her view. Knowing the title or location of a work of art adds greatly to its historic and artistic importance and "value" (not meaning money wise). 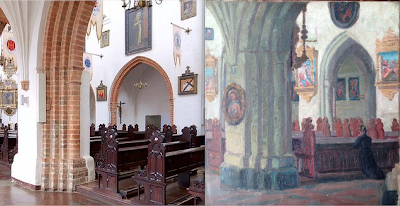 It looks like the church has seen some restoration, on the pillars, and the rames of biblical paintings (stations) seem be renewed. But most of it, the floor tiles and church benches are still as they were 100 years ago when Helene Isenbart visited.

All pictures borrowed freely from the Internet for friendly, educational and non commercial use only.
Geplaatst door Gerrie op 16:17 No comments:

First result of my request for information and examples by artist Elsa von Durant. (Danke, Thank you H.)

Two etchings proving she was a graphic artist also published in "Jugend" magazine : "Lesendes Kind" and  "Kinder am Strande" 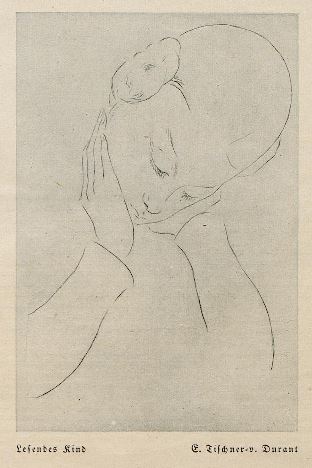 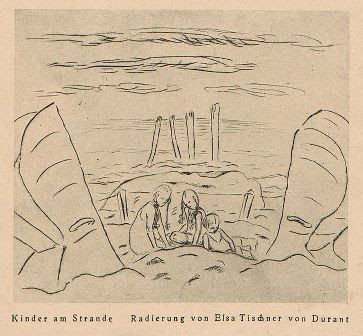 To my best knowledge: this condensed short biography is a first attempt.
The artist Eva Tischner-von Durant is not mentioned in any of the Artist Lexicons or adress books.
All help and further information by readers is appreciated and welcomed. 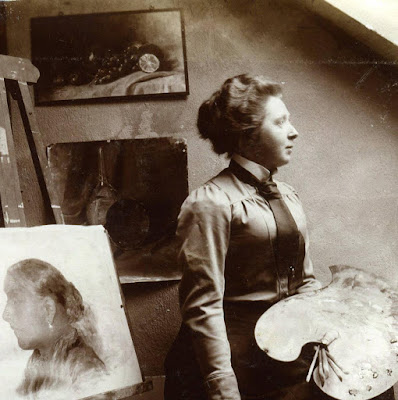 Elsa von Durant (1876-1958) was born in Breslau in 1876 as the oldest daughter of Baron Hans von Durant (1837-1907) and Baroness Eugenie von Hahn (1858-1900). To be more precise as: Freiin (Baroness) Elsa Emma Charlotte Henriette Kornelie Adelheid Christiane von Durant de Sénégas. Her 3 nobel brothers and her youngest sister were all born at her  fathers and ancestral Prussian estate and all given six or seven names, at palace Baranowitz in Upper Silesia (then Prussia now Poland). 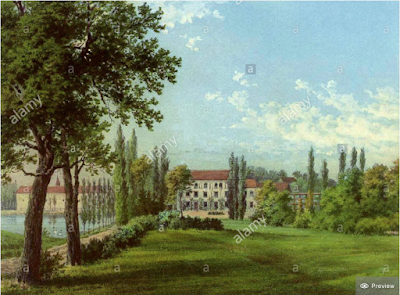 It had once been one of the great Prussian estates ("Gut"). Most of these estates today have fallen in ruin and neglect after the world had been on fire, maps were redrawn and populations were reshuffled in the aftermath: the Jews gone, the Germans out, communism in etc....   Although recent photo's show this palace at last has seen the beginnings of renovation. 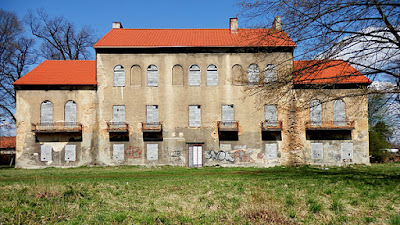 Her ancestors had come from France, protestant nobility fleeing France after the Edict de Nantes (treaty guaranteeing some freedom of religion) was revoked in 1685. The male members in the generations before (I followed the Prussian von Durants to her great-grand-father) were all high ranking military, marrying happily members of other nobel families, sharing and securing fortunes, estates and palaces, while an aunt (sister of her grandfather) had been in the personal service and entourage of Empress/Tsarina Katharine the Great and in that of her son Emperor/Tsar Paul-I until he was assassinated in 1801, at the imperial court at Saint-Petersburg. 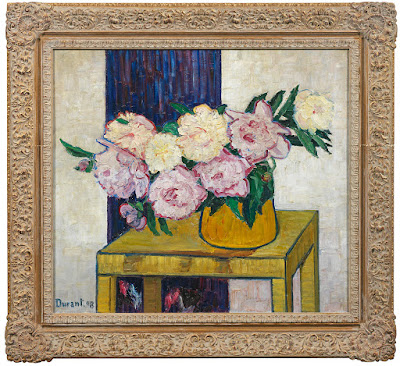 But today she is a completely forgotten artist, and very undeservedly as this example proves. She is not mentioned in any of the Artist Lexicons nor in Dresslers Kunsthandbuch. She was born in great wealth (her sister Frieda (1883-1966) I found in Prussian millionaires listings, the Germans keen on meticulous book keeping) in a nobel family, gifted able and allowed to study painting in Munich and Paris around 1900 (no doubt in the "Damenakademie" and "Academie Colarossi"), meeting the impressionists, post-impressionist and modernists and fortunate enough to even collect their paintings (more later) and to pursue an artistic career. Elsa's name popped up unasked, in an Ebay queerie this week. And Googling I read about her in a newspaper article from a recent presentation by German art historian Ulrike Götze. Today sharing the first results of my investigation. 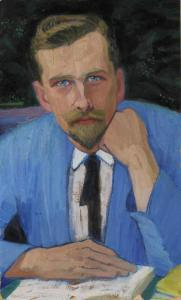 She married ophthalmologist Dr.med Rudolph Tischner (1879-1961) in 1909 who besides his private "eye-care" praxis in Friesing (near Munich) was also to become the "Nestor of German Parapsychology" including, occultism, telekineses, homeopathy and several other disciplines we today describe as: quackery. She lovingly painted his portrait bent over his, no doubt one of his own many written books. When things were still OK. 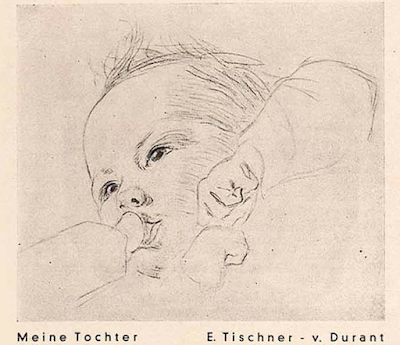 She became the mother of their daughter, Elli in 1913 and enjoyed bringing her up sketching lovingly the embraceable and adorable young girl. They lived through WW-I. Somehow "change" set in: Mr. and Mrs Tischner divorced in 1919. 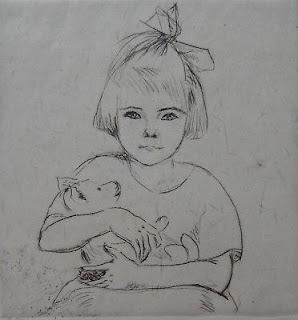 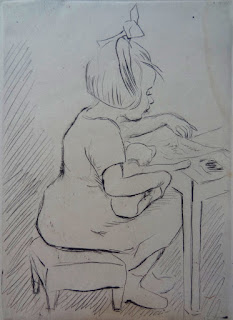 Single mother and artist Elsa managed to survive the great Depression but not without being forced  to sell her beloved paintings in the 1920's (so much much for divorce settlements in the 1920's) and then saw the National Socialists rise to power. She survived WW-II, her house bombed and destroyed near the end in 1944 losing everything, then her daughter committed suicide (in 1944). She lived alone and forgotten in a wooden garden shed the last 10 of her 80 long years on the planet wondering: what the ..... has happened ?
-------------

These are the 3 paintings once in the personal collection of the Baroness Elsa von Durant. 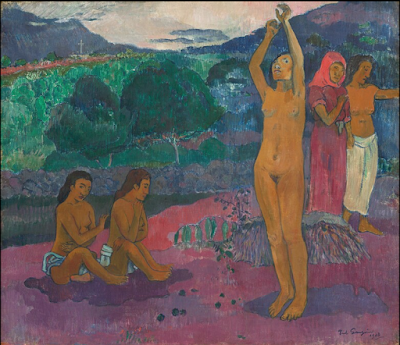 Paul Gauguin: "l'Invocation" painted in 1903 the year of his death and today in the collections of the National Gallery in Washington (USA) 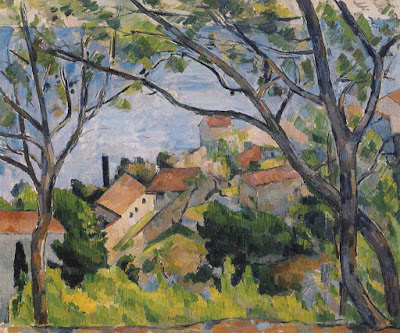 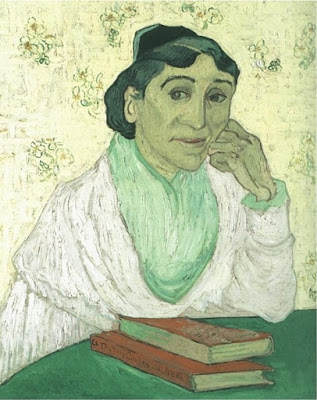 
All examples of paintings (artwork) by Elsa von Durant and additional genealogical and family details are welcomed.

All pictures borrowed freely from the Internet for friendly, educational and non commercial use only.
Geplaatst door Gerrie op 13:36 No comments: 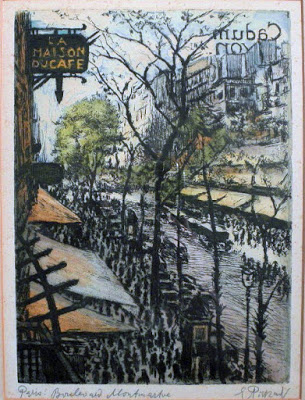 Finding the complete text of a 1924 graphics catalogue resulted in solving this mystery signature in this print found recently see posting of May 25th. Thank you Wolfgang. The artist is Berlin Jewish painter an etcher:
Ernst Max Pickardt
(Berlin 1876 - 1931 Berlin)

I shall not reveal all biographic details here (that is for the book) but although largely forgotten today he was represented in that catalogue with some 50 etchings mainly of German composers and Poets and Italian views, obviously after an extensive trip. I would very much like to know more about his parents Hermann Pickardt (dates unknown, he had a brother Julius Pickardt also in the beer trade. Julius' name is frequently mentioned, but probably as anti-semitic propaganda, in relation to the "Dividend-beer fraud & scandals" in the 1870-80's (after the Berlin stock market collapsed in 1873) and his mother Dorothea Heimann (dates unknown). She may be however identical with Doris Pickardt-Hermann, daughter of Berlin rabbi and printer Hermann Samuel Hermann (1810-1889) and Jeanette Freund. In that case Ernst has 5 more brothers and 2 sisters. As a biographer I would like to know about all 19th century Berlin Pickardt family members, there weren't that many and they seem all related, James, Wilhelm, Max, Felix etc...

Dorothea Heimann was Hermanns second wife, married around 1875. His first wife (dates and name unknown) died (aged 28) when their apartment at Oranienstrasse 52 collapsed due to unprofessional building activities in 1871. Their child (daughter) survived the crash. Revealed in 1871 newspapers and minutes of the 1872 criminal investigations to the cause leading to 3 fatalities. 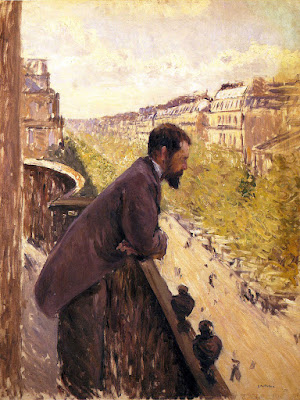 The Boulevard Montmartre view however is from his trip to Paris in 1928 and clearly a tribute to the impressionists Camille Pissaro and Gustave Caillebotte who kind of "invented" the boulevard view from a balcony from his posh Boulevard Hausmann residence.

Ernst's father Hermann was in the Berlin beer trade and he himself married 1917 the daughter of an heir of two Berlin fortunes (great-grandfathers): the Jewish jeweller to the imperial crown Zadig Freidländer (1801-1861) and Jewish king of textile Valentin Mannheimer (1815-1889):

Leonie Martha Lehfeld (Berlin 1892-1964 Berlin) is said to have been "Kleinplastikerein" a sculptrice or ceramist creating figurines. Sadly she is not mentioned in any of the artist lexicons. She was the daughter of lawyer Dr. Robert Lehfeld (b. Breslau 1857) and Bertha Friedlander (b. Berlin 1869). The Friendländer-Manheimer Berlin ancestry is clear but I would very much like to know more about this Lehfeld family too.