Demeter Koko: in the aviary 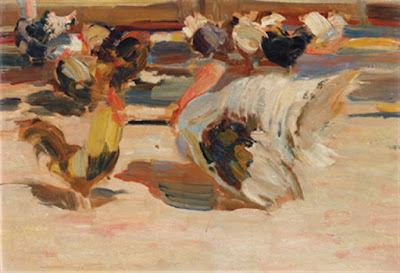 I always thought by deciding Emil Pottner (1872-1942) as my favorite bird (poultry) artist  that this choice would be final. He was just the most wonderful and charming painter/drawer who happened also to be one be of the finest printmakers that ever lived. 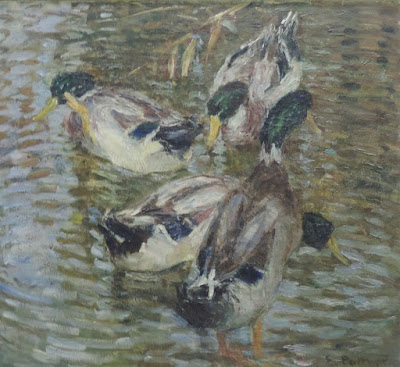 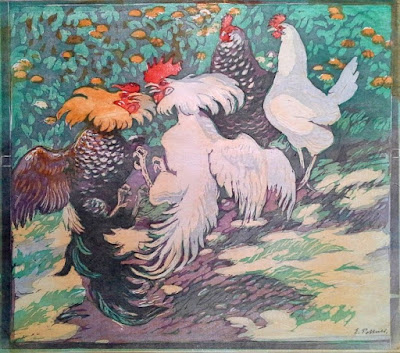 But last week during my daily rounds of research I stumbled over another wonderful artist who loved to paint poultry. He died very young of "consumption". Tuberculosis wearing the patient so down, this horrible desease seemed for early observers and diagnosis to "consume" the patient from the inside, lending the common name to the desease. We live in a truly wonderful and blessed age 100 years later tuberculosis is in our modern world almost eradicated and curable. 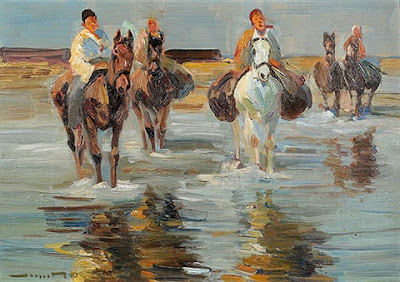 Demeter Koko was trained in the painting school of Bertha von Tarnoczy (1846-1936) in Linz and then went to study in Heinrich Knirr's (1862-1944) painting school in Munich and also with  celebrated animal painter Heinrich von Zügel (1850-1941). He has a wonderful light and brilliant pallet. 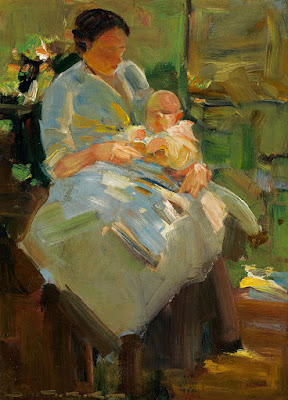 He worked from the the end of WW1 untill his untimely death as a painter of animals in Linz and was during his short life famous for his paintings and drawings of poultry. Just like Emil Pottner who also originated from Austria (Salzburg) but had settled in Petzow near Berlin. Potter was murdered in the Holocaust. 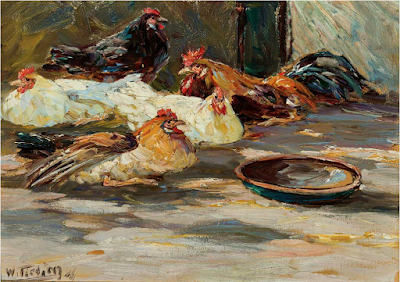 All pictures borrowed freely from the Internet for friendly, educational and non commercial use only.
Geplaatst door Gerrie op 08:17 No comments: 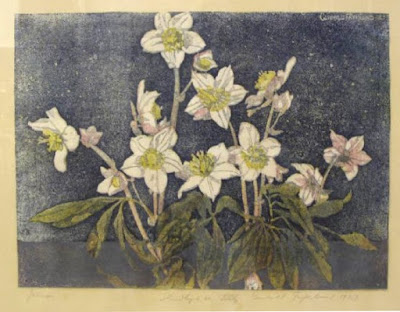 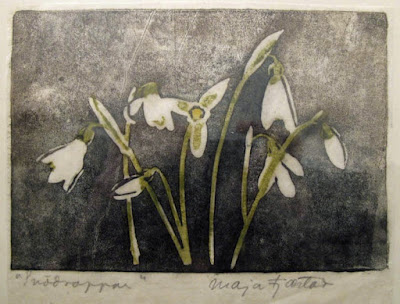 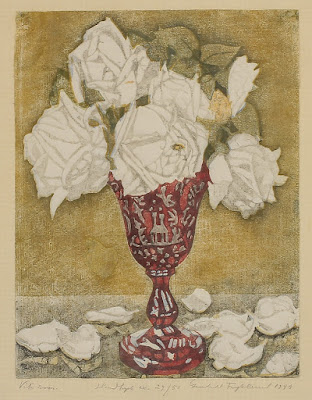 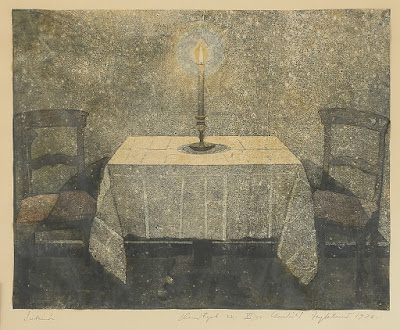 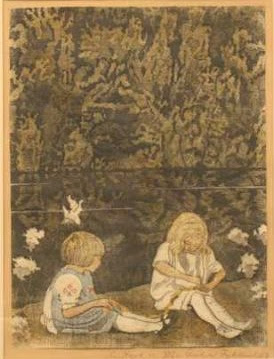 She created landscapes, interiors, portraits in oil and was a woodblock printmaker. Her work is collected in the Värmland and  Halmstad museums. 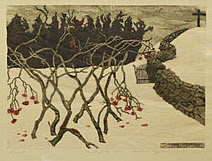 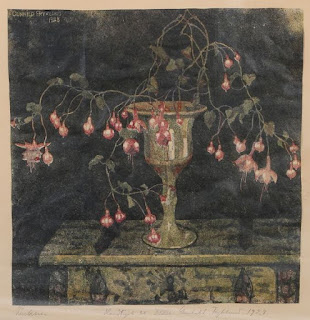 She is mentioned in several Scandinavian artists lexicons and this last print showed up recently in an online auction site.

All pictures borrowed freely from the Internet for friendly, educational and non commercial use only.
Geplaatst door Gerrie op 12:14 No comments:

A fortnight ago I introduced miss Rosa Paul from Schweinfurt (here, or follow the label below) in this Blog. For a century nobody but the director of the St. Gallen Museum knew about this forgotten printmaker shared in his Martha Cunz exhibition catalogue "Faszination Farbholzschnitt". 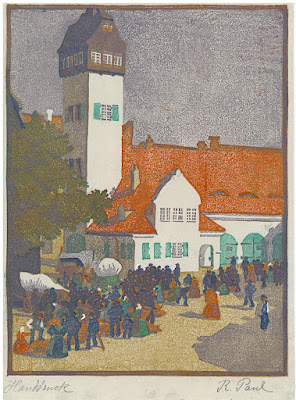 With some help and armchair research in the historic adress books found in the public website "Mein Schweinfurt" and some serious puzzling some more light can now be thrown upon this unknown painter and printmaker. Research in local historic archives, some serious genealogical research and perhaps an article in a local newspaper on this undeservedly forgotten artistic daughter of Schweinfurt will no doubt lead to a renewed interest and respect. 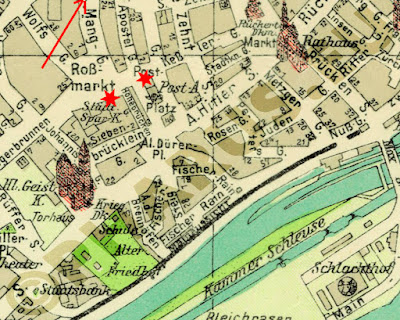 Here's what I deduced from the facts found in the Website records and with the help of readers Wolfgang in Frankfurt and Dorothea in Mittelfranken. 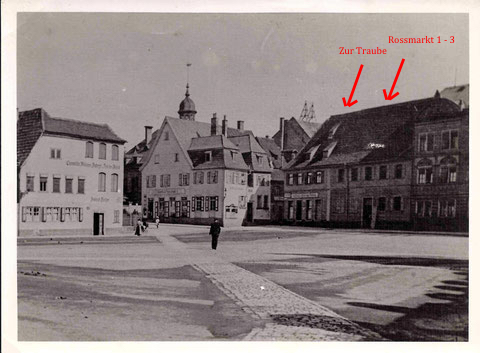 When widowed Lisette Paul-Wagner, probably with her two  daughters Rosa (1884-1936) and Margarethe (1880-1962), moved to Rossmarkt nr. 1 somewhere between 1896 and  1904 she had moved from nearby "Postplatz 2"  formerly known as "an der Fleischbank 2")  where her husband Gottlob Paul had been Inn keeper, at "Weinstube Paul" and where she will have worked and lived with her family until the new owners took over the business.
In 1890 the old "Fleischbank" (meat market) was demolished to make room for the new post office. The square, formerly known as "an der Fleischbank" was renamed Postplatz. 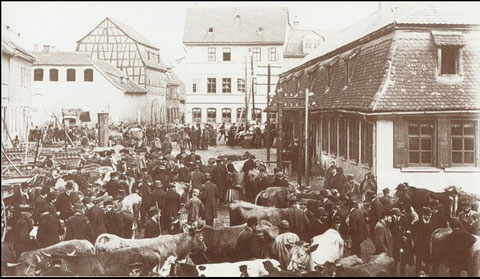 The building with the "Fachwerk" upper left is probably the Inn: Gaststätte/Weinstube Paul.

Before Gottlob Paul the Inn was owned by Wolfgang Paul: let us for or now assume he was Gottlob's father, Rosa' grandfather. Wolfgang Paul is mentioned from the records the owner of Weinstube Paul in 1846 and 1856. In 1886 he is recorded as retired living at "An der Fleischmarkt nr. 4". Gottlob is mentioned as the owner in 1886 and 1895. Somewhere between 1895 and 1904 he will have died. In 1904-1921 the Inn was owned by Johann Michael Paul and in 1925 by Elise Paul (is she, could she be identical with Lisette ??). From 1925 also "Gastwirt" Karl Paul and his wife ("Stütze"" Helene Paul are mentioned living here. 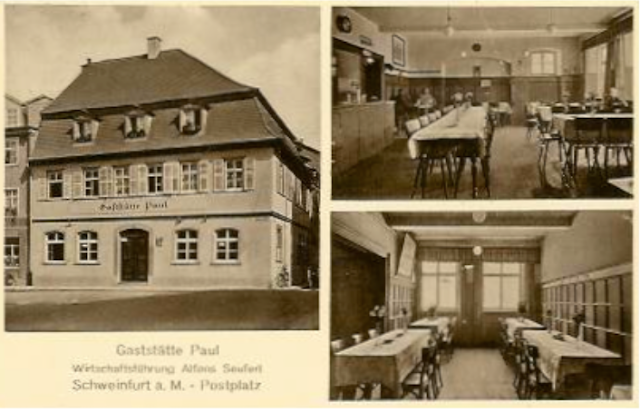 It is said the Inn was run by the Paul family until 1932 and then changed ownership. It would be logical to think Johann was the son of Gottlob, and thus brother of Rosa. But if Gottlob and Lisette had no boy (old enough) as successor it could also be Johann succeeded the business as a nephew. The only other "Paul" mentioned in the 19th century Schweinfurt adress books is Leander Paul a "Maschinenschlosser" (engine fitter). His relationship to the before mentioned is speculation. But Leander could very well be Gottlob's brother. From here on genealogical research by a local interested person or historian will no doubt reveal family connections. 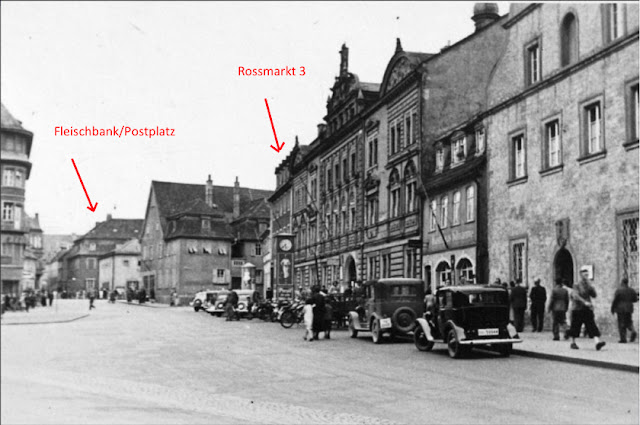 Entire south facade composed from two photo's (2 stories added Rossmarkt 1-3) as Rosa would have known it. She lived in one of the floors in the second from left house next to "Weinstube zur Traube". 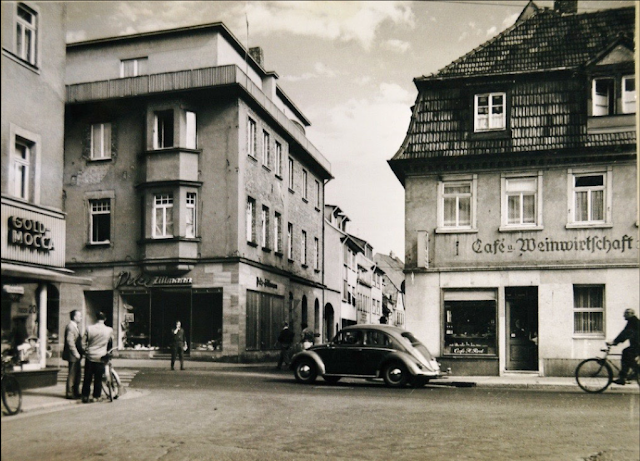 Margaretha lives her until 1938 and them moves to Frankengasse 25.

View from one of the floors of Rossmarkt 1, possibly from Rosa's home.
Before 1907: fire watch tower at the end of the Mang-gasse is not yet restored.

From here on following only the information from the adress books is speculation: some proper investigation on the spot is required. After 1967/68 no Paul family members are found in the Schweinfurt telephone books. 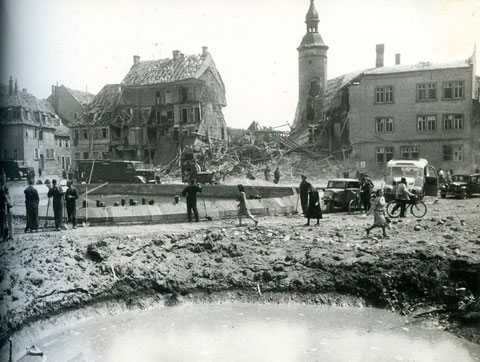 Since the house Rossmarkt 1-3 is mentioned to be owned by one Emil Hofmann and later by Babette Hoffmann (widdow) I think we can assume the building with nr. 1 (and 3) is not the corner building "Gasthaus und Weinstube zur Traube" because this building has recorded different ownership. Somewhere between 1900 and 1912 two stories were added to the building 1-3. Some 13 different people are registered living here. Among them a Wilhelm Wagner (possibly related to Lisette Paul-Wagner). 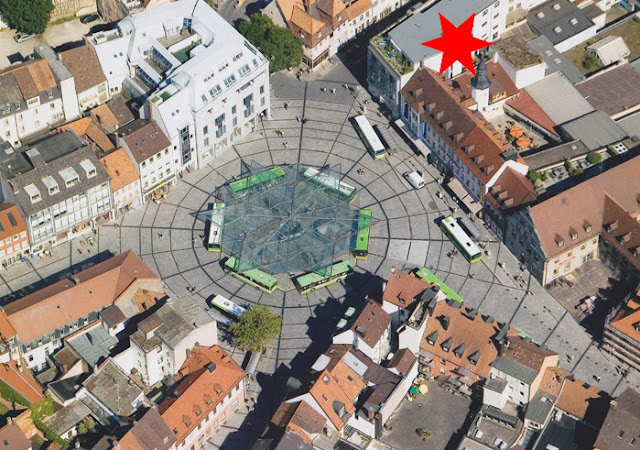 After 18 months of bombing raids (targeting the strategic ball-bearing factories) half the houses of Schweinfurt were damaged and/or lost. Today "Weinstube zur Traube" houses the Rossmarkt Apotheke and nr. 1-3 is replaced by modern shopping buildings. The fire watch, also heavily damaged by bombs was eventually torn down in the 1950's. 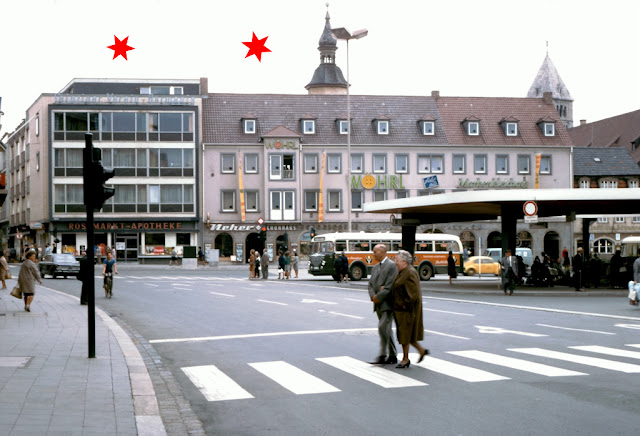 I invite any interested party to follow-up on our preliminary investigations with further investigations, comments, corrections and suggestions.

With many thanks to Wolfgang in Frankfurt, Theodora in Mittelfranken, Dr. Daniel Studer in Sankt Gallen and Schweinfurt Historical Website coordinator Peter Hofmann in Schweinfurt. Most historic photo's were found in this website.

All pictures borrowed freely from the Internet for friendly, educational and non commercial use only.
Geplaatst door Gerrie op 19:09 2 comments: