Karel Tondl: a day at the river

Meeting all sorts of interesting artists along my stay in Paris and visits to Quai de la Tournelle it's now time for some serious and printmaking business. Woodcuts by an artist who was trained by important and influential artist and professor Max Svabinsky (1873-1962) in Prag and later also studied philosophy at the Sorbonne in Paris.


Karel Tondl, fellow countryman and contemporary of the great Frantisek Tavik Simon (1899-1942) who lived and owned a studio in Paris, both painters and printmakers, in later life, like his teacher Svabinsky, was appointed professor in Prag. He created in 1930 this port folio with some of the most exquisite woodcut prints: A day by the river Seine, 6 views of Paris. 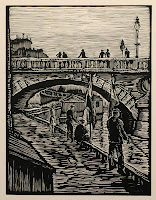 "Towards Pont Neuf", photograph found in an old book on Paris, notice the bateaux lavoir and see also the postcard photo below. 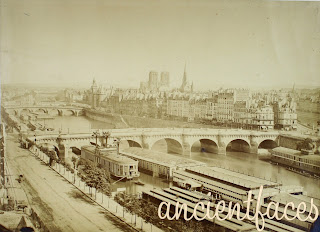 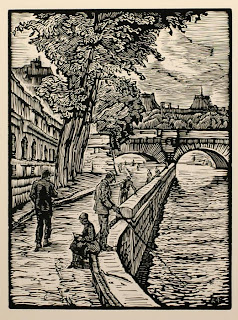 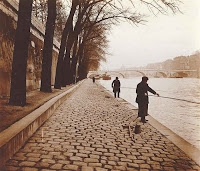 I perticularly like the prints were Tondl stages people in these compositions. Reading, walking (the dog), hanging over a railing  or fishing. Charles Augustin Lhermitte, (1881-1945) the contemporary photographer does that too as I showed in the before posting. 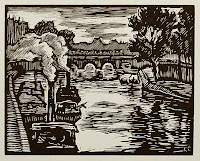 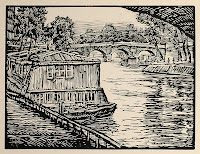 In these last two (and the first two) Tondl is showing the characteristic bateaux lavoir, the city's many floating washing (and bathing) facilities which came into fashion in the mid 18th century were in use until around 1940. This posting will be followed by an article about this typical river bound industry, many of theses boats were immortalized by Charles Lhermitte (son of painter Leon Lhermitte (1844-1925) who was  greatly admired by Vincent van Gogh) and various other fine artists. 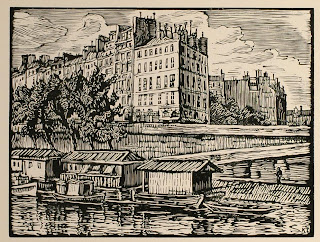 Tondl exhibited world wide (see the print of New-York city below) and I can't resist showing a small selection here of his great artistic skills. 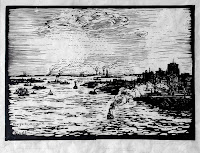 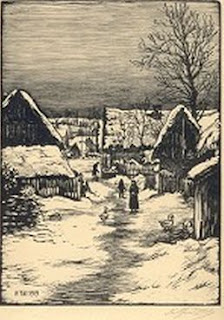 Besides his woodcut printmaking Karel Tondl is best known for his expressionist paintings of bathing women. In the style and colors of Matisse' bathers, lake side dancers and nudes.
See also my 3 other (I can now say very well read and popular) postings on the theme of bathing women and printmaking (here). 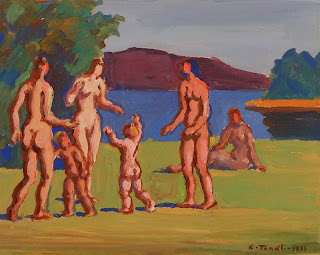 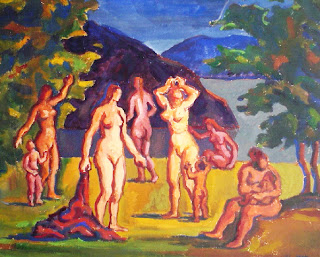 And last but not least included in this posting is a nice example of Tondl's Prag teacher Max Svabinsky who will have his own private posting in the Linosaurus soon. In this print there's also the hinting at Matisse. And do I detect a touch of Anders Zorn and maybe a dash of Paul Degas in the choice of moment ?

Intrigued by the subject in George Guinegauls’ sugar aquatint print, the steam powered unloading crane (grue déchargement a vapeur) in the far corner of Quai de la Tournelle, today an account of my quest and recent discoveries. Before continuing meeting many other artists on this famous spot in Paris. 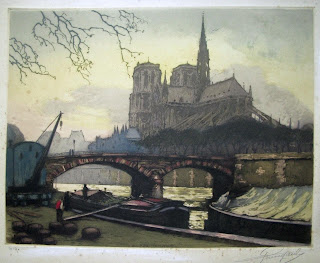 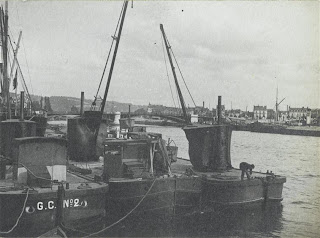 Besides quay based and mobile unloading cranes these crane-boats were in use and available along the quays of Paris unloading the many Seine barges (bergers de la Seine) delivering supplies to Paris.
Impressionist painter Paul Cezanne (1839-1906) painted such a boat downstream in Bercy: 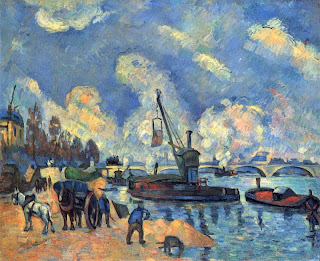 Eugène Galien Lalloue (1854-1941) shows an identical crane-boat used on both sides of the river: on Quai de la Tournelle and opposite on Quai Henri IV. 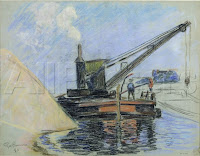 And I perticularly like all the activity that is going on in Maximilien Luce’  (1858-1935) painting.

Charles Augustin Lhermite was a frequent visitor of the quays. His pioneering photographs evidence his main interest lay in the activities of people, cranes, and horse drawn carriages. And in composition rather than in just shooting buildings and pretty views. These photographic  compositions are created very much in the way of a trained painter. 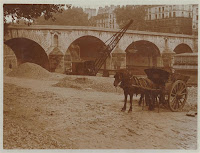 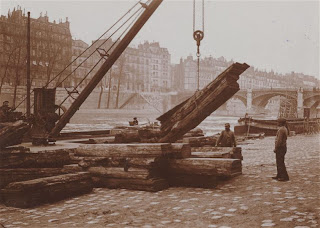 He shows a third way using a static crane-unit on Quai de la Tournelle with a steam powered winch from the deck of a barge.

Etcher Anton Schutz (1894-1955) also active in London, New York and his native Germany  was in Paris when steam cranes were used in 1928 when the old Pont de la Tournelle was being rebuild.


Eugene  Charvot (1847-1924) is showing a mobile crane on Quai de la Tournelle. In one of his typical round etchings. He also made this fine drawing from the opposite bank,  Quai Henri IV on Île Saint Louis, overlooking river Seine and the Pont de l'Archevêché. 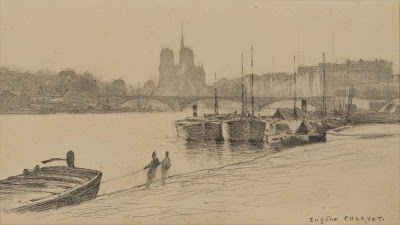 Carles Pinet (1867-1932) is best remembered for his etchings used in a series of famous Paris postcards. He is showing the crane in these both. The right one in detail even. 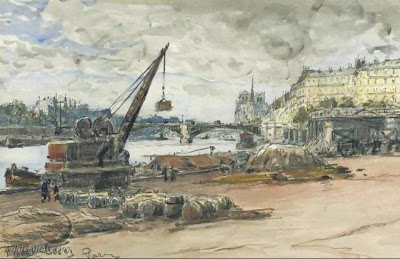 and with Manzano Pissaro (1871-1961) (below), son of impressionist painter Camille Pissaro (1830-1903), he was also busy and working on the other, opposite bank at  Quai Henri IV. This crane a bigger species. 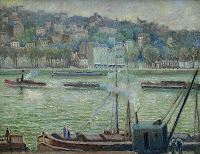 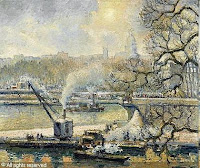 Lucien Gautier (1850-1925) saw the crane at work too on Quai de la Tournelle in a not very well balanced composition (but he was a better etcher) (left) and Gustave Madelein (1867-1944) just makes visible the crane's hook, but did a fine job on the cathedral in a few simple brush strokes (right). 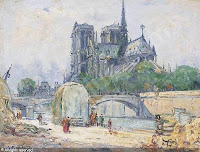 Speaking of simple brush strokes: what about relatively unknown and short lived Paul Thomas (1868-1910) and his stunning rendering of Notre Dame's "abside" seen from the packed and stacked quay? (click to embiggen) 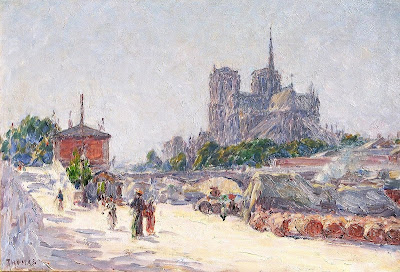 Very much after Frantisek Tavik Simon (1877-1942), who lived and worked in Paris around the same time French artist Manuel Robbe (1872-1936) choose the little crane to feature in these 2 aquatint prints. The second probably seen during the floods of 1910/1911. Robbe also used the alias of Alphons Lafitte and  we'll meet this prolific artist later in a sceduled posting. 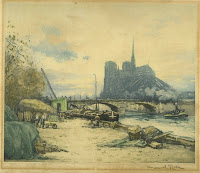 PS: This posting is not supposed to be a complete list of all works of art showing a steam crane on Quai de la Tournelle in Paris. If you think I've missed one I would be very pleased if you'ld let me know and preferably send it to me.
Geplaatst door Gerrie op 15:35 2 comments: 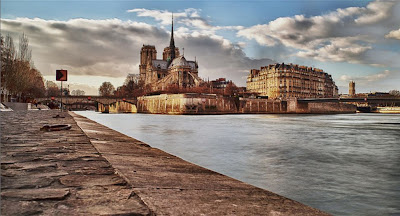 Finding Guinegaults "Quai de la Tournelle" (before posting), probably not the finest of renderings of this location but definitely was one of the less expensive. Following my stream of consciousnes and exploring the location I now understand why there are so many paintings and prints from and seen from this Paris landmark. 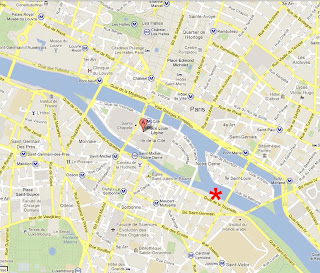 It's because one of the most famous and beautiful cathedrals in the world, le Notre Dame, is best viewed from this quay. Far more dramatic and impressive  then seen from streetlevel above. Were the bookstalls are.

Before showing a selection of paintings and etchings here are some great photographs from around the time most works of art were also created: 1880-1920.

Personally I was most intriqued by the little unloading crane that is visible (but often not) in photo's and paintings and in Guinegault's print. And of course by the working people, the carts and horses and stacks of goods unloaded on the quay.

The many quais of river Seine were vital river ports importing, storing and distributing all sort of foods, building materials, wine and fuels. The broad quay was even used as an outdoors workshop with a view by matras makers in summer.

The oldest and most important quais are located around and in the heart of Paris, Île de la Cité and Île Saint Louis. Quai de la Tournelle, Quai d'Orleans and Quai Bethune opposite on Île Saint Louis and Quai Henri IV further upstream all overlooking l'Abside de Notre Dame, the apse or rounded rear of the cathedral.

Most commercial activities have gone now, besides the tourists of course. And see how high the Seine rose in 1909/10 floading large parts of the city: 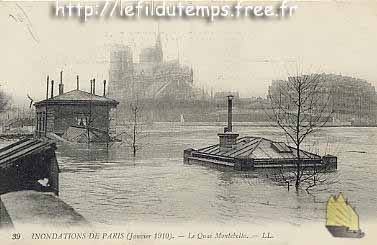 This photo by Paris photographer Eugène Atget (1857-1927) taken a year later in 1911 under Pont de l'Archevêché when the Seine was back to normal levels. Looking downstream at the next Quai de Montebello opposite Notre Dame,

from where he shot Notre Dame and the Seine probably standing underneeth  Pont de l'Archevêché.
His colleagues saw the beauty of the quais and the working people too: Eduard Jean Steichen 1879-1973: fire wood transportation from the quais. 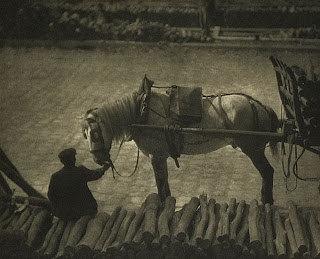 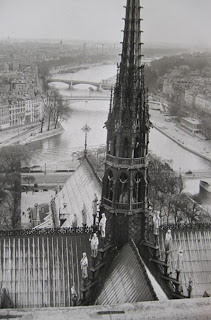