Else Zinkeisen and friends: around Hamburg Bellevue and Ausser Alster.

Today some more nice pictures of picturesque Hamburg, to be more specific of the beautiful surroundings of the Alster the 2 lakes in the heart of this great city. 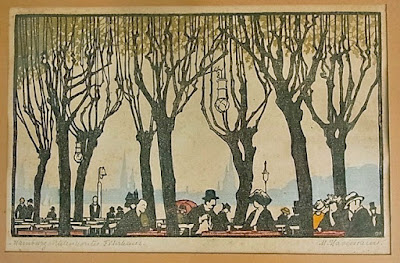 Visit also my earlier posting on the Alster Ühlenhorster Fährhus with Margarete Braumullers iconic print of this location that was destroyed in the bombing and firestorms following Operation Gomorrha in 1943 with the rest of Hamburg and was never rebuild. (use the search option or follow the labels to this post)


To my surprise Helene Mass was in Hamburg too (and in Amsterdam !), I wonder if the two printmakers ever met, hard to believe they did not. Another recent discovery is Else Zinkeisen (before 1910) studied privately in Berlin with painter Franz Skarbina (1849-1910 !) and an even greater surprise is that Wally Peretz-Brutzkus, of whom we know so very little, also was Skarbina's student (as was Marianna von Buddenbrock btw). This will all be revealed in the upcoming book and later postings.

The many districts of this big city that are spread around the Alster were interconnected with a steam ferry service in service again today. 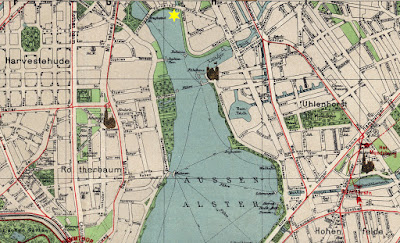 Many bridges spanning the many canals and branches, the inner city of Hamburg is often compared to Amsterdam. 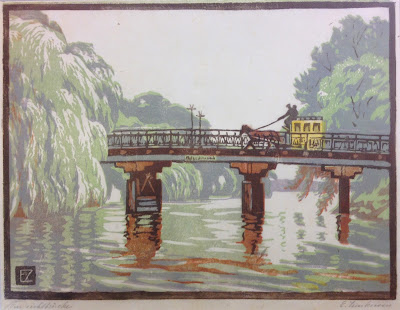 This print, possibly of historic importance, was recently discovered and is showing the "Fernsicht Brücke". For a while however we wrongly assumed it might be the Eppendorfer-Winterhude bridge depicted below by Hamburg photographer-printmaker Bernhard Troch (1867-1924). 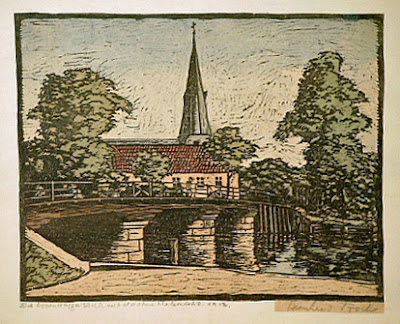 With its companion bridge the "Krugkoppel Brücke" the "Fernsicht Brücke" it closes the circuit around the Ausser Alster in the north. It is seen looking into the "Rondeelkanal" and "Rondeelteich" a "Cul de sac" of the Ausser Alster  occupied by the villa's of Hamburg prosperous elite build in the second half of the 19th century.


Both wooden bridges were build around 1890 and replaced in 1927/28 by concrete and macon work bridges still standing today. They give access to "Bellevue": Hamburgs posh district with grand villas and city palaces build and owned by the rich and influential. Compare living here with living around Central Park in New-York, around Tiergarten in Berlin or in the heart of London.

Most interesting is also the horse drawn coach: "Kaiserliche und Königliche Post" connecting Hamburg with the world with a network of fast and modern designed coaches working in clockwork schedules until the steam engine took over. 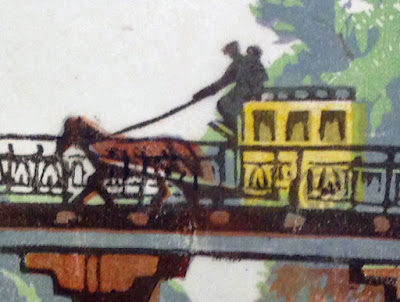 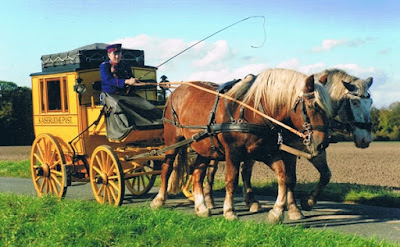 This also never before seen (not by me) and recently found in Hamburg print by Else Zinkeisen of whom my research learned she possibly was from a prosperous family of Hamburg city-centre chemists/pharmacists shows the entrance (Park Tor) to a park.
The Hamburg Stadt-Park in Winterhude is not far away and it is also not far from the "Künstlerhaus" were she lived in 1930. I would love to receive more genealogical and biographical information concerning the Hamburg Zinkeisen family.

Else Zinkeisen had two artistic cousins in Dresden and is remotely connected to the famous Scottish painting Zinkeisen sisters Anna and Doris who derive from  a Zinkeisen timber trading branch of the family.
And this Else Zinkeisen print (below) that came to me through different channels could very well show the, or a, "Stadt Park" or Alster meadow although Else Zinkeisen traveled and created views of other places (like Munich). Before today she was mostly know and remembered for her views of river Elbe seen from the heights of Hamburg-Altona. 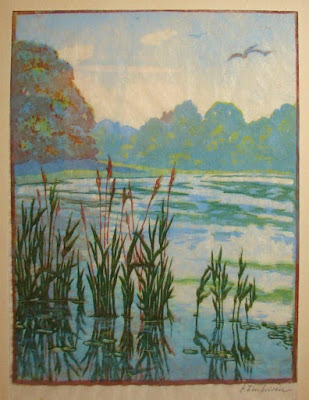 More Alster and Hamburg in next posting. 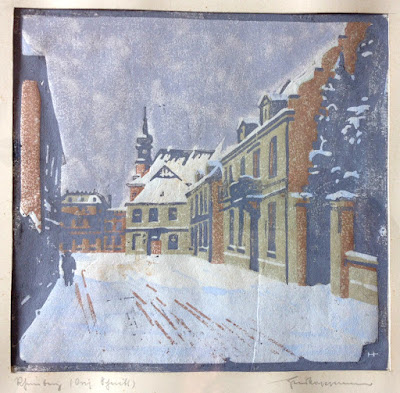 Ebay is what it is, an auction site, but for the curious and investigative by heart it is also a treasure cove of unexpected and new finds and names. Last week this rather nice color woodblock washed up on the shore lines of Ebay. If not for this print I probably would never have heard of the artist Hein Hoppmann. 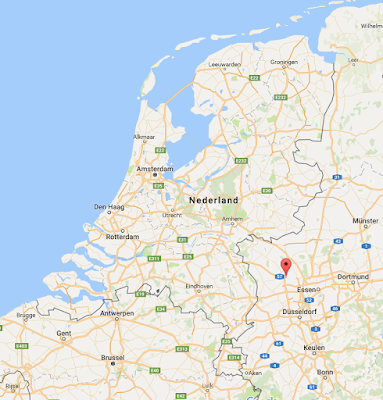 Investigating a bit Hoppmann turned out to be, although he studied in Berlin Academy and exhibited in several European countries and even in New-York (USA), a locally celabrated artist ("Heimatkünstler") and a teacher. He was born, lived, worked, and died and died in his native Rheinberg, a small provincial town near Duisburg in Nordrhein-Westfalia not that far from my part of the World and about the same size as my domicilum: some 30.000 inhabitants. 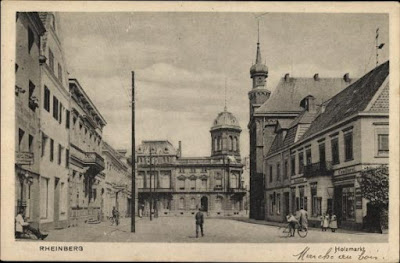 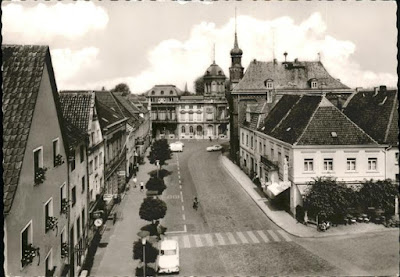 I have no idea why the buildings in his 1930's print are no longer there today: most probably by war damage although the automobiles in the above picture seem 1950's. Hoppmann lost most of his work at the end of WW-2. This surviving print fetched nearly 100€ a few days back, and I suppose his depiction  of Rheinberg Holzmarkt is of local and historic importance. 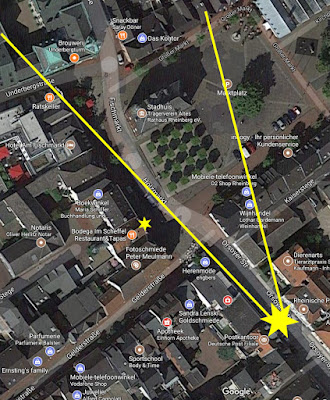 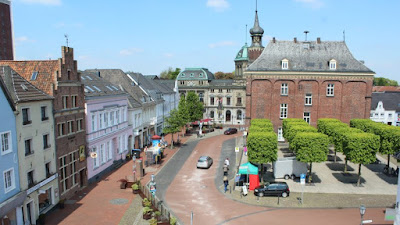 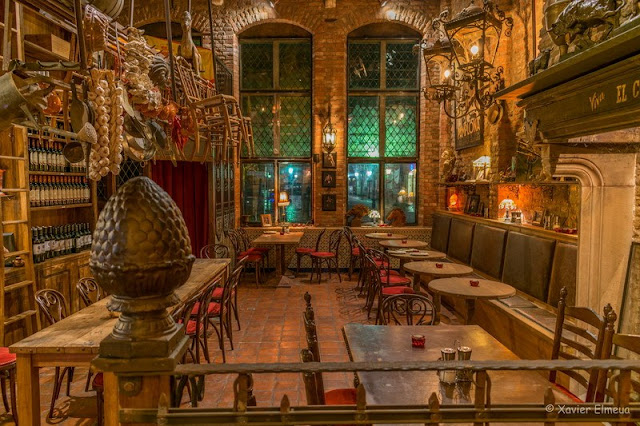