Siegward Sprotte meets Fritz Zalisz on the isle of Sylt.

Siegward Sprotte must have been one of Emil Orliks (1870-1932) last students in Berlin. Spanning a period of 25 years of teaching in Berlin among his first students had been many older women artists trained and educated in the classic tradition followed by a next generation of Art-Nouveau and Jugenstil artists. His last students will have been heavily influenced by expressionism. 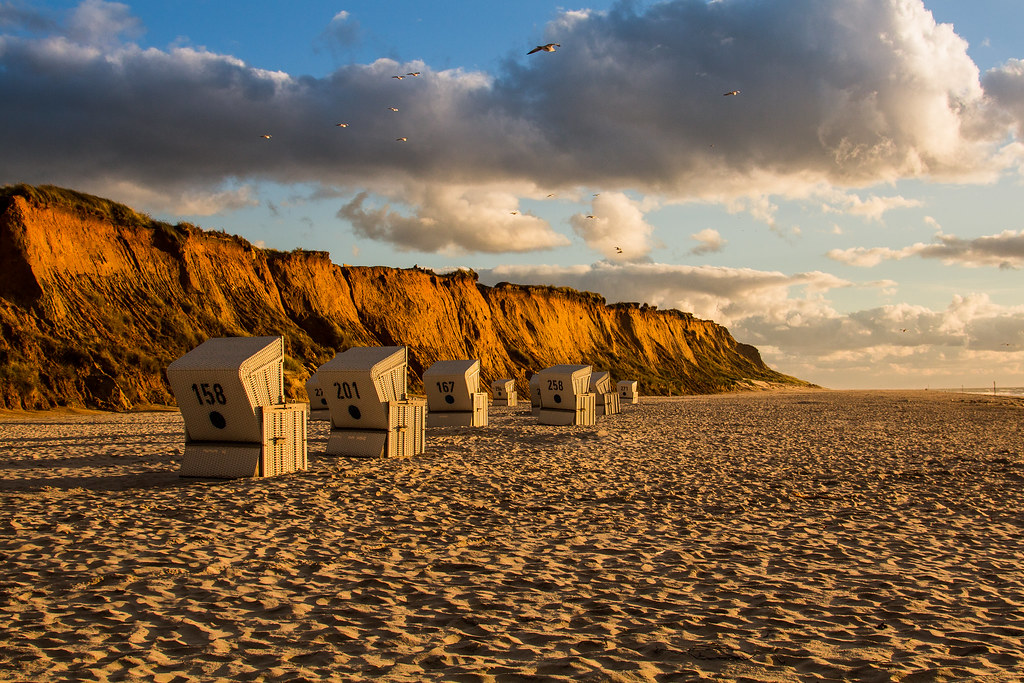 I am acquainted with Sprotte because of one (1956) woodcut showing the iconic "Rotes Klif" (red cliff) on the German North-Sea island of Sylt. It lead me to his colorful watercolor drawings ("scribbles") of beach, dunes and North Sea. 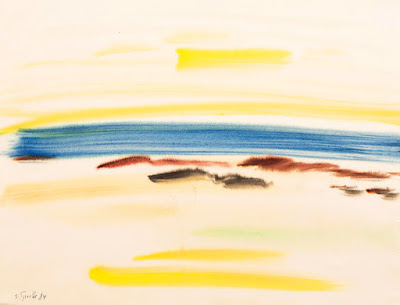 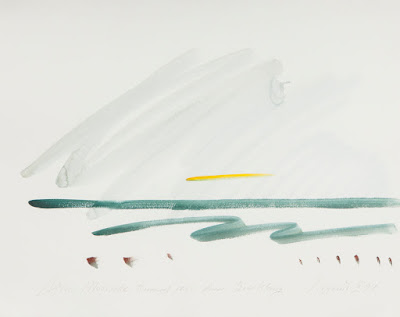 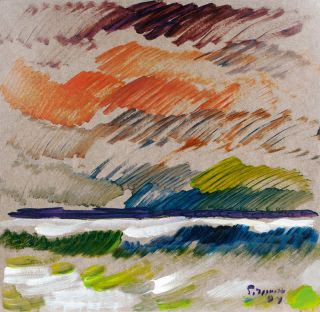 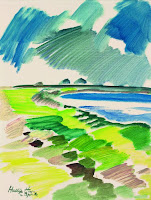 Sprotte must have been familiar with the artistic world of Fritz Zalisz who visited Sylt in the 1920's although I could not discover how they were acquainted. Maybe a passing reader will tell me in due time. Both artists have tried at woodblock printmaking but only a few examples are known to me. Both artist need only a minimum of lines to share with us what they saw and what they felt. I include their biographies, composed from several sources, below. 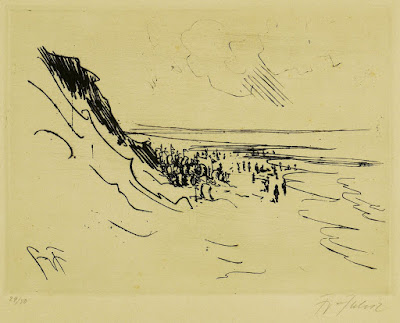 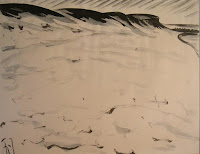 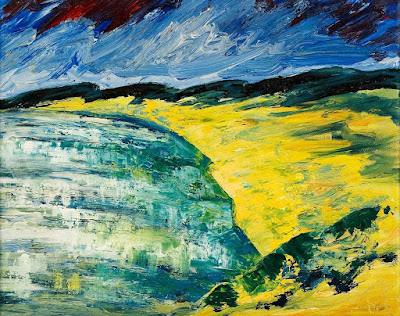 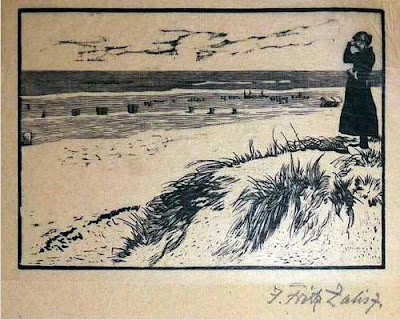 All pictures embiggen by left mouse-click.

All pictures borrowed freely from the Internet for friendly, educational and non commercial use only

Painter, sculptor, poet, graphic artist and printmakler. Son of a Goldsmith and juweler. Studied first zoology with zoologist, philosopher and Charles Darwin follower Ernst Heackel (1834-1919) in Jena co-operating with him and who introduced him to study with Gabriel von Max (1840-1915) and sculptor Adolf von Hillebrandt (1847-1921) in Munich. In Munich he met Vladimir Lenin (1870-1924) who’s portrait he drew. In WWI he participated as a war-artist (in the 58th devision) continuing his studies at Leipzig ”Akademie für Grafik und Buchgewerbe” with Otto Richard Bossert (1874-1919), Alois Kolb (1875-1942) and Adolf Lehnert (1862-1948). Studied also in Berlin, worked in Leipzig and travelled to Holland, Belgium, France and Switzerland.
He mainly worked as graphic artist, creating a series of 24 lithographies for “Faust”, 12 for “Iphegenie” and 12 for “Christus”. He made monumental ornamentions for buildings in Leipzig and Altenhain that mostly were destroyed in WWII.
In 1927/28 he was offered a professorship in the University of Madrid which he declined. In the early 1920’s he stayed regularly on the North-Sea island of Sylt were he created many drawings in watercolour and chalk, etchings and sketches. In 1940 he moved to Leipzig-Holzhausen and after WWII he created mainly small and animal sculptures.
Three of his works were exhibited in the (1996) Oskar Kokoschka (1886-1980) exhibition in Dresden. Exhibited 1923 in the Chemnitz “Kunsthutte” and “Kunsthalle Dessau” and in 1928 in Madrid.

Goddesses and Putti, Venus and Cupid : Any idea ?

I know, this print (22 x 22 cm.) is nothing like the early XXth century (German) color woodblock prints this Blog is more or less build around. But please let me know what you make of this woodblock (it really is !) print. It emerged from a stack of material from all sorts and periods deriving from all quarters of the compass. And I fell in love instantly (this happens a lot lately, it might have to do with an aging romantic). 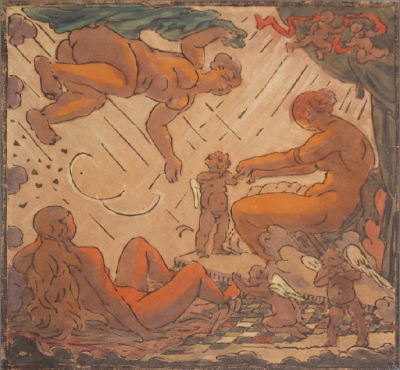 I'm not sure wether the colors are block-printed, or colored by hand, but it has a wonderful pallet of exquisitely warm, glowing and almost sensual "setting sun" earth colors. The laziness and sensuality of the moment is screaming of the paper but I have no idea what the artist tries to transmit to us. It's obviously "Venus, Company and Putti" (her son Cupid). There's no signature or other marking leading to an artist.

It could be a 17th or 18th century composition by Pieter Paul Rubens (1577-1640), compare also the band around the left upper arm, 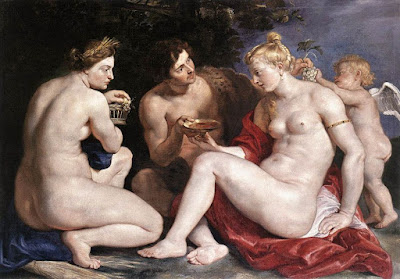 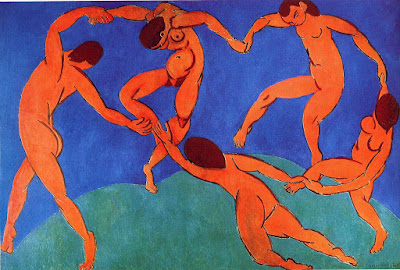 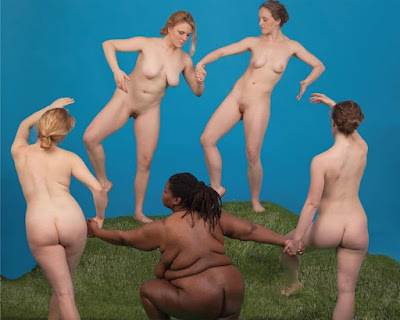 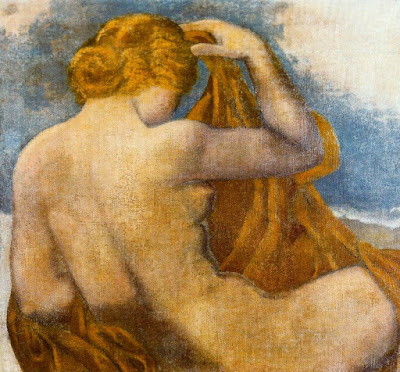 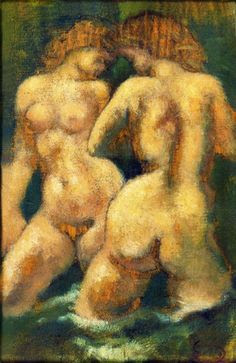 Did you know he created some exquisite woodcuts ("gravure a bois") too ? 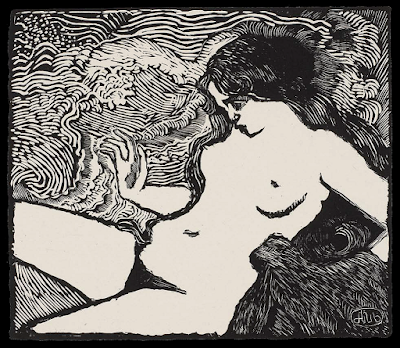 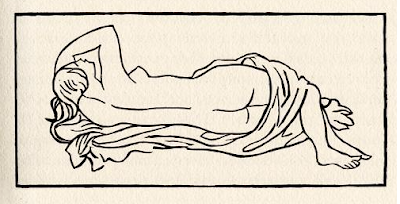 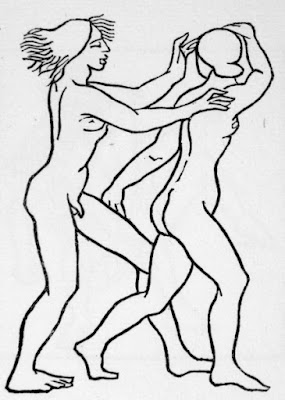 All pictures borrowed freely from the Internet for friendly, educational and non commercial use only.
Geplaatst door Gerrie op 10:19 2 comments: 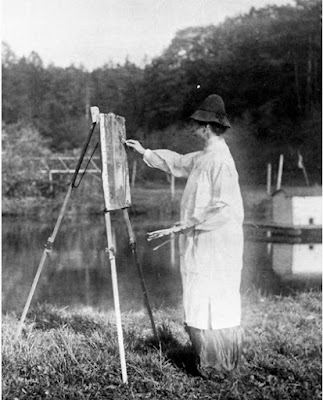 was a German painter (and printmaker) who, in her times was much praised for her sea paintings. She'd started her studies privately with marine painter Georg Burmeister (1864-1936) who's influence and use of colour is evident in all her sea related paintings. 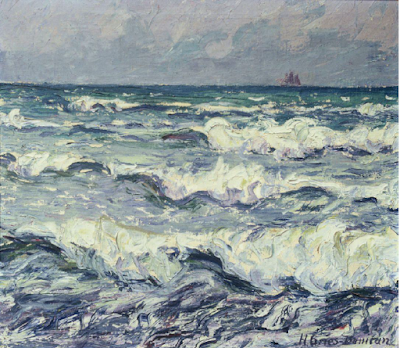 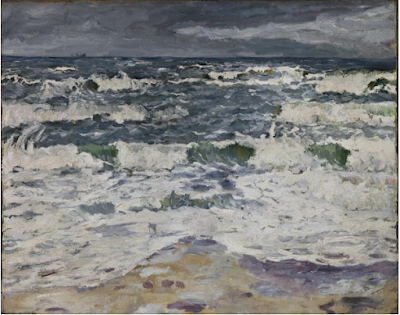 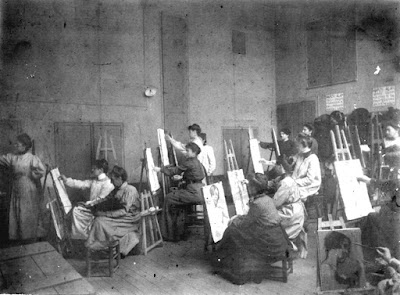 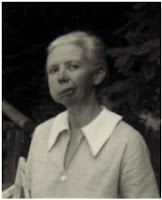 In childhood she had to undergo surgery (probably because of an inner ear infection) which left her disabled after the facial nerve was damaged with a paralyzed and drooping right side of her face and a hearing impediment. Recently more attention to her work and biography was given by a publication by a grand-nephew. And her work was exhibited in 2008. 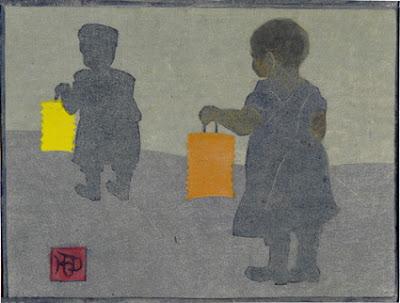 Finding these two very Japanese colour woodblock prints in the Internet was a pleasant surprise. I could not find datings but I wonder what may have inspired her because there’s not much to compare them with besides the 1906-08 Japanese lantern prints by American printmaker Bertha Lum (1869-1954) but that seems too far fetched and unlikely. 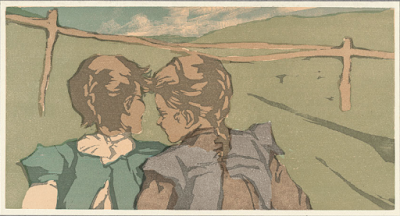 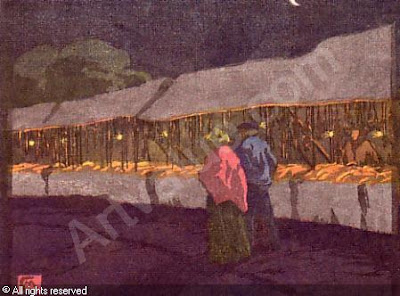 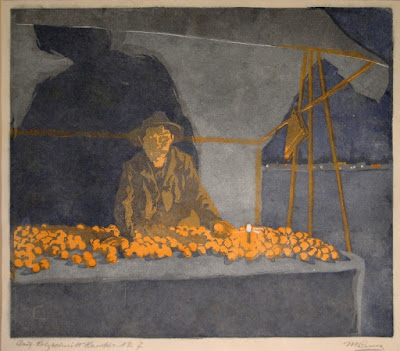 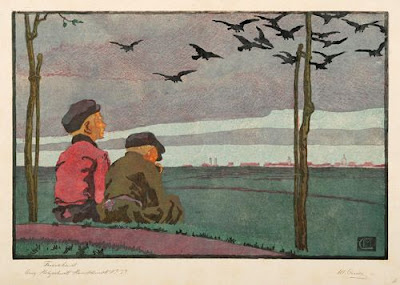 Studying in Berlin 1906-1908 places her also in the times of Emil Orlik who came from Munich to Berlin in 1905 to teach woodblock printmaking. It is frustrating so little written evidence is left or delivered to us although this period is called "recent history". In Germany this is because of the devastations of archives, buildings and complete city's in during WW2.

All pictures borrowed freely from the Internet for friendly, educational and non commercial use only.
Geplaatst door Gerrie op 10:15 4 comments: