She was the daughter of Hamburg "Kaufmann" (merchant) Samuel Salomon  and Léa Isaacson (1843-1902). Lea is buried in Hamburg Ohlsdorf cemetery. 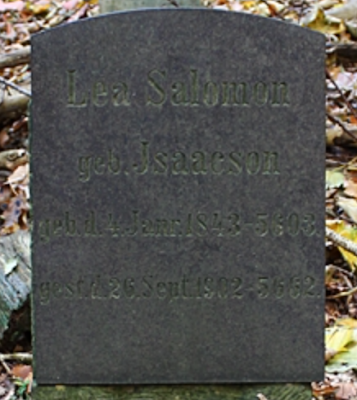 A Samuel Salomons is buried here also but in another plot (without dates) 35 years later in 1937. It might be her father although he by then must have reached a respectable high age, not impossibly but maybe another relative rests here (brother/nephew?). Her mother Lea's ancestors possibly can be traced to a Jewish community in Neubukow near Rostsock and I have a hunch Samuel Salomon might be related to a very prosperous Schleswick/Dittmarschen Jewish cigar manufacturer originating from Stavenhagen (also near Rostock) with honorary title "Komerzienrat" bearing the same name several decades earlier. On my request the Hamburg Jewish community offered help with the ancestry/genealogy because my arm-chair research from neighbouring Friesland had come to a halt. Results will be shared in due time. Lea was 41 btw giving birth to Agnes and she died when Agnes was 18, the same year we find her in Paris. Some interesting questions arise: was she the last and/or only child ? How did her father finance her studies in Munich (under Angelo Jank and Christian Landenberger) and Paris ? She married into an aristocratic family, the son of a diplomat and military so surely there must be traces of her fathers prosperity and business in Hamburg allowing her to study abroad.

Why research an artist that is so little known, forgotten and obscured ? I had Agnes in my archive files with just one print (and some paintings of which the marines surely are not by her but by an unknown "A. von Bulow"). It is however a very early print, showing Paris Boulevard de Vaugirard, adjacent to "Place de Maine" (and the Metro entrance). Opposite, then was the backside of Montparnasse train station demolished in the 1960's to make place for the imposing over Paris Tour Montparnasse. 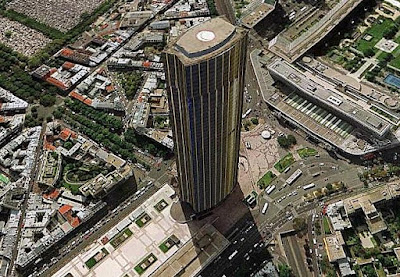 It is possibly the earliest woodblock prints by a German woman artist I've ever come across.

Although not an Art Historian by birth or academic training I've wondered about the similarities in Marie Wippermans prints with painter Albert Marquet (see before posting) who had become seriously popular in Paris in the first years of the 20 century. Marquet was a close friend of Matisse and colleague of Raoul Dufy with whom he travelled and painted together in Normandy in 1906 (below posters).

Only recently, after getting in contact with Marie Wippermanns grandson (see before posting, these prints were accidentally sold and never meant to leave the family, but that is another story) I came to see this print of a handsome woman in light coat and feathered hat in a Paris café by Agnes Salomon. She wasn't married then, she was in 1908 in Paris, with aristocrat, journalist and self-taught painter Joachim von Bülow from Breslau but his (military) ancestors also originated from the Rostock area. The couple later moved to Berlin and eventually to Brussels. 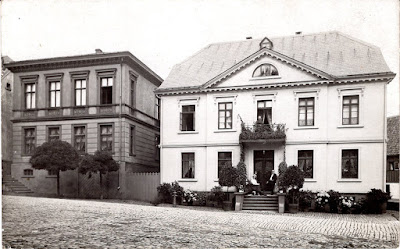 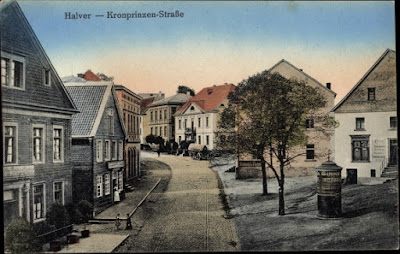 The Café print was in the personal belongings of Marie Wipperman. Who like Agnes, married the same year she returned from Paris in Halver near Lüdenscheid, Germany moving into her house at Marktstrasse 11 in Halver (above a: right, b: middle).


A long row of very interesting and well known international artists took part and I suppose because of the presence of several French and British, were invited to join.

Of which I was able to trace various exhibited prints (selection above). The café portrait by Agnes Salomon possibly was mentioned in a 1904 print catalogue as "Dame im Weiss". Agnes on that occasion was mentioned living in Munich.

Please send all information on Agnes von Bülow-Salomon and help me to write and complete her short biography.

Through this Blog I recently came in touch with Marie Wippermann relatives resulting in a very friendly correspondence, additional biography, family photographs and: two more woodblock prints by her created in Paris 1907-08.

As a daughter of prosperous Lüdenscheid distiller Karl August Wippermann she was allowed to study in Paris and according to family history also under Lovis Corinth in Berlin. Returned to Halver near Lüdenscheid in 1908 she married manufacturer Wilhelm Linden who died in 1922 after which it was said she never painted again and two of her three sons fell in WW-II in Russia.
As we saw at the time Marie was not alone in Paris (see before Wippermann article/posting) probably all attending lessons in the Academy Colarossi. 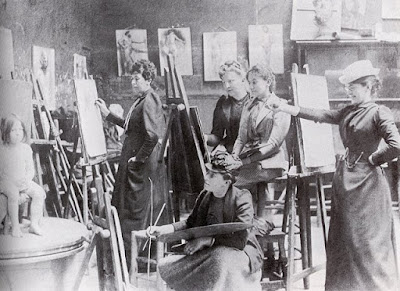 I ask the help of readers to try and identify if possible the Paris locations Marie choose and depicted. 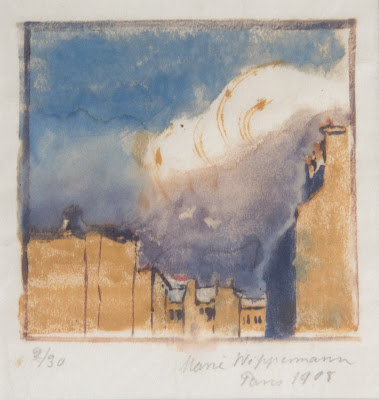 The street view (she possibly did it twice, so maybe from her rooms ?) possibly near where she had her quarters in the the Montparnasse district, not far from the Académie Colarossi and near Boulevard de Vaugirard (the "Jardin de Luxembourg" area) where Hamburg born Agnes Salomon lived who we will meet in next and closely related posting. 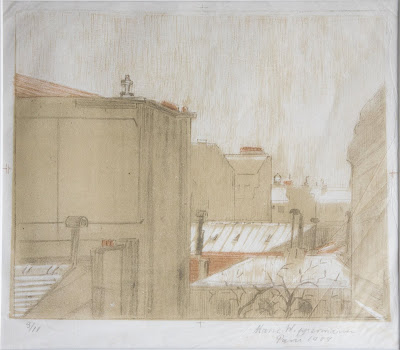 A view on Eglise St-Joseph-des-Carmes in Rue (not the Boulevard) de Vaugirard (we think to see a cross on top, not a chimney) is a possible candidate. Seen from higher up the adjacent buildings ? Which happens to be "La Catho" or the Paris Catholic University founded 1875. It is not a 100% fit, possibly wrong, but just for starters. Better suggestions are welcomed. 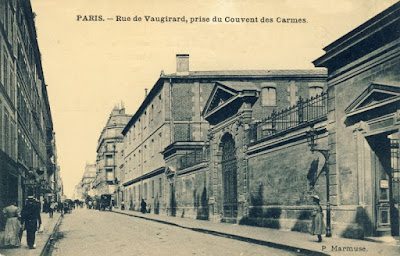 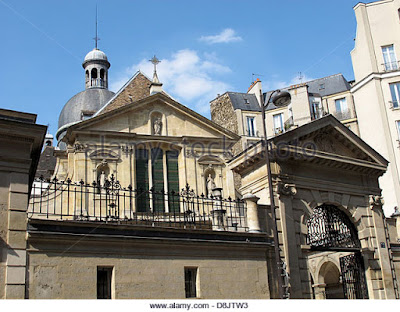 What I thought to be earlier a "big cloud over Paris" on closer inspection and analysis is thick smoke from a chimney curling downwards into the street. Streetviews, winter and smoke were also topics used by Paris painter Albert Marquet, fauvist and close friend of Henri Matisse and in those years exhibiting with great success his Paris street views in Paris.

Seine river and quai with huge

Billboard - mural, Quai along River Seine with a barge (?)
This advertisement (obviously a huge mural) of "Le Petit Journal" a popular newspaper on a Paris wall somewhere along river Seine + remnants of other (red) advertisements + the silhouettes of the buildings I hope will be enough to eventually disclose the exact location of this Seine-quai print by Marie Wippermann. 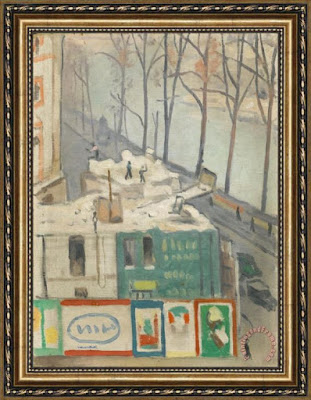 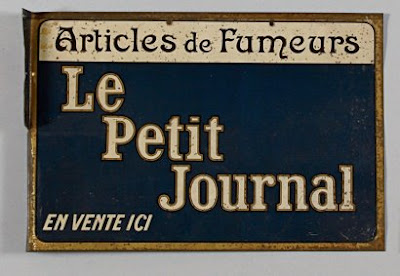 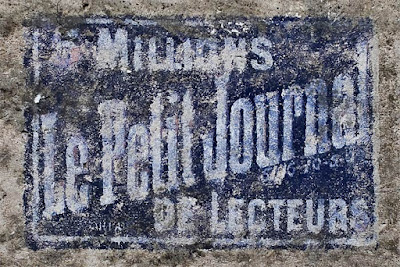 And then, in the end, creating a bridge to next posting, there was this surprising woodblock portrait, "Women in Café with coat and feathered hat", that once belonged in the private possession of Marie Wippermann that will be discussed in next posting. It will lead us possibly and unexpectedly to the birth of German Modern woodblock printmaking. In Paris ! This print was probably mentioned in a 1904 (!) graphics catalogue. More revelations & surprises in next posting.

All help and suggestions welcomed.

All pictures borrowed freely from the Internet for friendly, educational and non commercial use only. And with courtesy of the Linden-Wippermann family.
Geplaatst door Gerrie op 20:11 No comments:

After posting and sending several emails to Pferdmenges family members with accessible email addresses I received notice of attention by a friendly family member who will look into this puzzle and forward my interest.

And as many times before I received an addition, a piece of the puzzle, that I've obviously overlooked, by faithful reader Hannelore from Austria. Not identical but possibly related ? 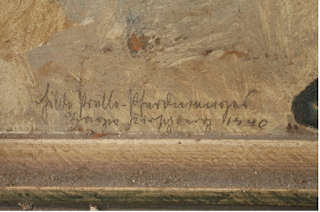 This is the only example I was able to find and I doubt the auction catalogue title: "Maxe Kirschberg". It is obviously a Jewish older man and dated 1940.

As always: all information welcomed !

Pictures borrowed freely from the Internet for friendly, educational and non commercial use only.
Geplaatst door Gerrie op 12:57 No comments: 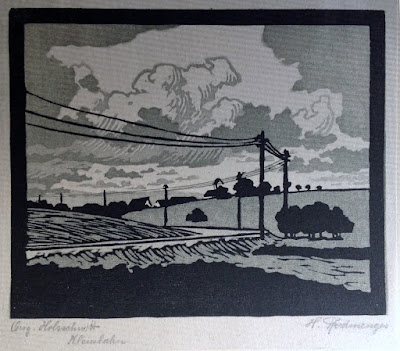 In my ongoing research into the life's of forgotten German women printmakers it is not often that I encounter a completely new (to me) "girl on the block". This small and monochrome, titled "Kleinbahn" print surfacing recently in German Ebay was a surprise. Although investing many hours since (auto-diagnosed as a mild  disorder in the autistic spectrum) in trying to establish the identity of the maker Helene Pferdmenges it was without success so far. She is not to be found in any of the Artists Lexicions or Artist Address books, nor did I succeed in identifying an artist by this name after thorough Internet research. An artist by this name is nowhere mentioned. 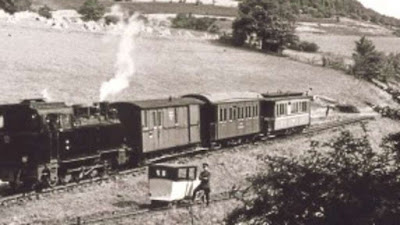 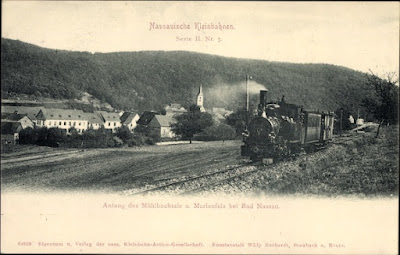 A "Kleinbahn" was a tertiary railway track or system, not a main or secondary line. Under less strict rules, laws and regulations they were constructed in the later part of the 19th century often using existing roads connecting rural areas or industrial sites (mines and factories). Most of them were soon to be closed at the beginning of the age of the automobile. 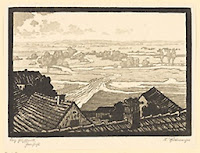 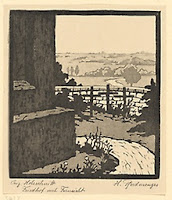 Four of her prints are preserved in the Art Institute Chicago (Lois H. Culver Fund ?) in America, probably a bequest by a faithful visitor or supporter. I'm very curious to the American link of the donator with the Pferdmenges family. Maybe this would shed some light: a direct or indirect relative immigrating and in the possesion of these prints (?). One of them shows a street in Osterode in the Harz region (below left), the other ones could be also from here (Quedlinburg ?) 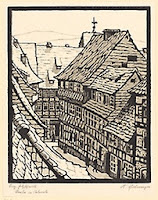 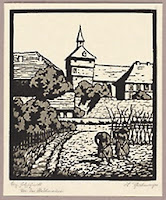 This (auctioned) 1934 portrait of "Helene Hertmanni, geb. Pferdmenges"  by well known painter Adolf Münzer (1870-1952) who was also a professor in Düsseldorf Academy and an illustrator ("Jugend" magazine) shows a woman that cannot (I could not) be identified within the Internet free accessible genealogical sites. Her given dates are: born 1893- died 1962 (possibly taken from the frame?). I have not been able to find a Hertmanni-Pferdmenges partner by marriage (how many can there be with this combination ?) or a Helene Pferdmenges (1893-1962) other then: 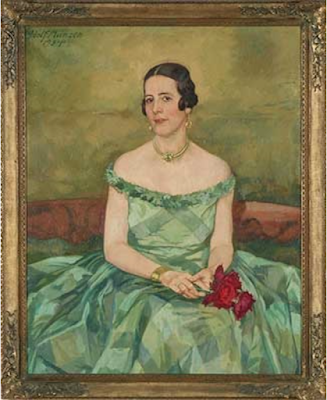 The Pferdmenges family originates from centuries past from the Mönchengladbach (Reydt) region and several prosperous members were in the 19th century wool, cotton and textile industrials. Large families with many children and as was the custom often intermarried over the centuries with other regional industrial families, loom- and mill owners, weavers etc....

Possibly the most known member was banker and member of parliament  (Bundestag) Robert Pferdmenges (1880-1962), a personal friend of Konrad Adenauer, first Chancelor of the Federal Republic of Germany (West Germany).  Robert Pferdmenges is considered to have personally saved the jewish Sal. Oppenheim Bank during the Nazi regime. (He was a son of Wilhelm Albert Pferdmenges (b. 1844) and Helene Croon (1851-1930) (see below)


Thus my initial research ended up with several (too many !) persons with the name Helene Pferdmenges, either by birth or by marriage. Here is the result,  an ultimate attempt to identify one of the candidates as the artist by name and period: roughly born between 1850-1900 and living into or after the 1930's. And I think I possibly may have overlooked one or two.


Finding Helene with the help of readers would be wonderful.


This posting is a request to all who stumbles over it and who may have information about the printmaking artist Helene Pferdmenges and/or her family to share information. I plan to send an email to every Pferdmenges I can find the @ address of in a Google search.