Until recently Berlin printmaker Hedwig Matthiessen (1878 - after 1921) wasn't even represented in my archive of some 200 German women printmakers pioneering with color woodblock printmaking in the beginning of the XXth century. Summing up what I was able to find about her resulted in the Blog article only three weeks ago: here. After today four examples of her work are behind her name. 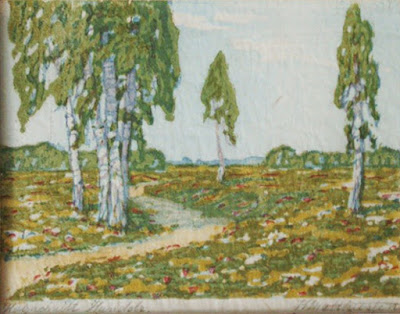 Last week another print surfaced, leading to a rather unexpected and pleasant identification of a print in my archive of yet unidentified pictures of prints. It had an illegibly faded signature. It shows unmistakably the same location, same path and row of birches.  And besides, the date mentioned on this last print gives us a time-line: 1915. Located in Berlin who other then Emil Orlik could have taught her this type of printmaking. 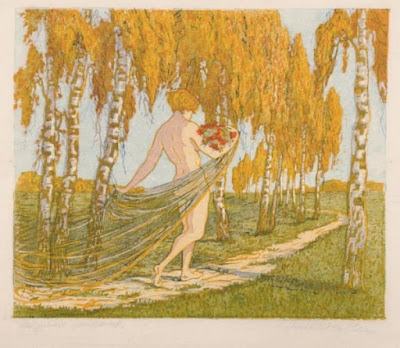 Whoever owns this last print with the spring Goddess (I think I saw it in Ebay long time ago) is requested to send me a good photographic copy. Considerations of swapping the original will be met with generous enthusiasm.

These pictures were also added to the recent biography article on Hedwig Matthiessen.
Geplaatst door Gerrie op 09:09 No comments:


Born in a small town in Prussia called "Klein Schläfken" (Little Sleep) and later becoming a ferry-tale storyteller can not be a coincidence. He studied in Art Academies of Königsberg and Berlin later moved to, worked and lived in Königsberg in  Prussia then a province of Germany now Kaliningrad a Russian enclave (and ice free gateway to the Baltic) situated between Poland and Lithuania. He later moved to Marburg in Western Germany. 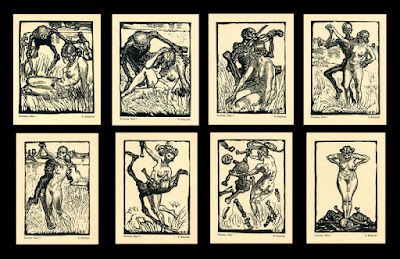 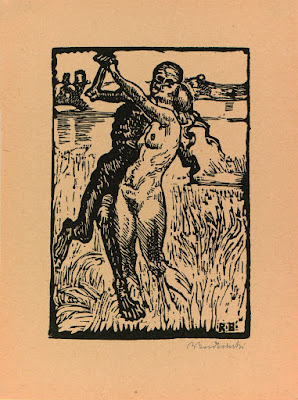 Robert Budzinski was a master of all graphic techniques but is mostly known and remembered by his 8 woodblock prints of "Totentanz", or Dance macabre. Sinister pictures, by some experts or critics he was later even qualified as  an occult printmaker. 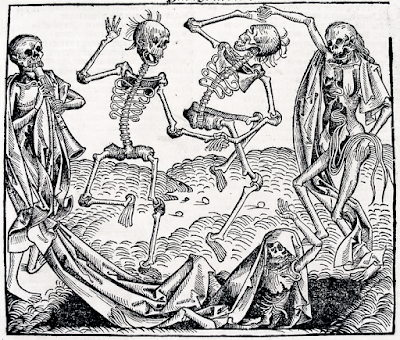 These prints are of course not "occult" but related and referring to Franz Liszt's (1811-1886) piano music/ Liszt was fascinated by Dante's (1265-1321) Devinia Comedia and the illustrated Neurenburg Chronicles by Hans Holbein the younger (1497-1543) telling of the massacre caused by the plague ravaging Europe in 1346-1351. 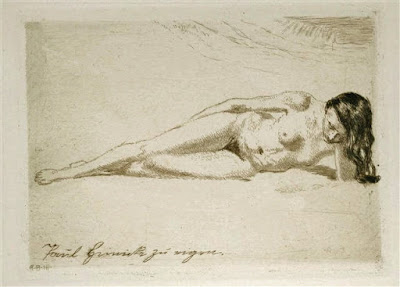 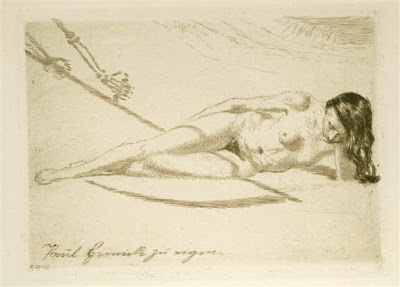 Erasing the (shadow of) Grim Reaper (Photoshop) renders an altogether nice picture of a young woman reading on the beach. It also removes the balance Budzinski created in the composition and of course removes the several layers of thought, bewilderment and reflection printed on the paper and, most of all, carved in the mind of the observer. Watching them too closely they almost seem to hurt. 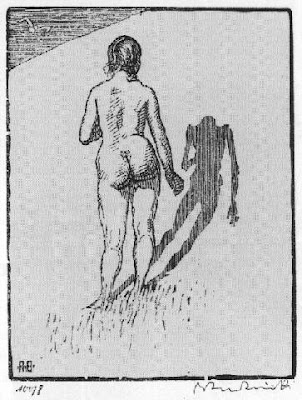 However fascinating these haunting pictures are I like even better his dreamlike compositions and captures of transcendent emotions: love, passion, longing, yearning, sleeping and dreaming. Each print seems to tell a personal and highly sensitive story of love and attraction, of distance and nearness, of storm and calm. Lovers drifting and floating in the universe and also of attraction and alienation on earth and in the heavens, almost prophetical. 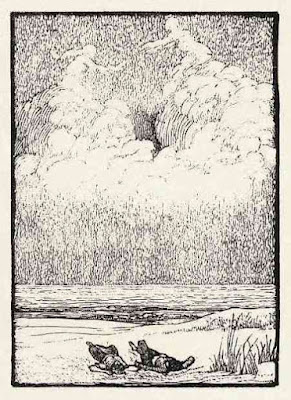 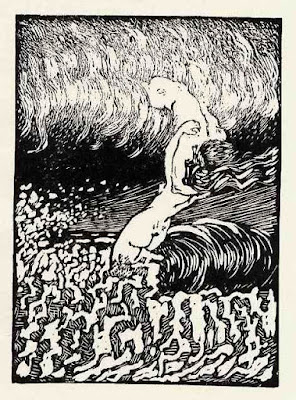 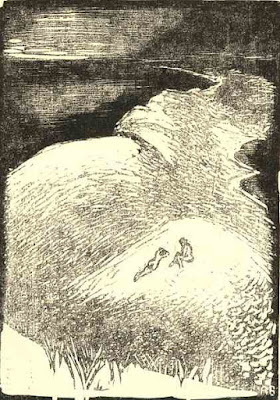 These scenes Budzsinki often situated in the infinite and desolate landscape of endless sand and dunes and Baltic sea: the Curonian Spit and Lagoon ("Kurische Nerung") a natural sandy reef and Ice age remnant in the North of Poland. 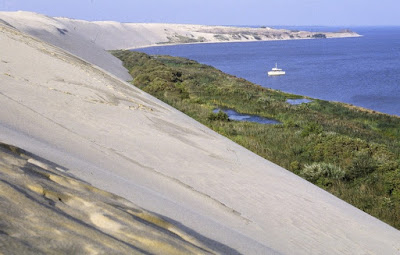 Not far from his home. It is where the village of Nidden with its artists colony is situated in its heart. 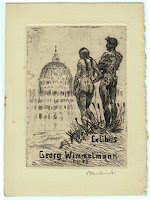 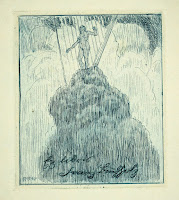 Most of his prints offered (in Ebay) are unsigned and, an educated guess as he also wrote in his memoirs, published as calendar plates. Often not very successful editions, the backside of stacks of unsold calendars serving him as cheap drawing paper. 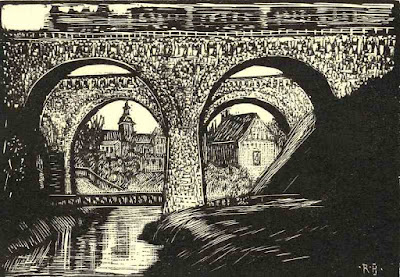 This fine last example (there are several others to be found in the Internet) is almost an amalgam of a print by Dutch printmaker Wijand Otto Jan Nieuwenkamp and Turner's most famous painting and is seen regularly in German Ebay. 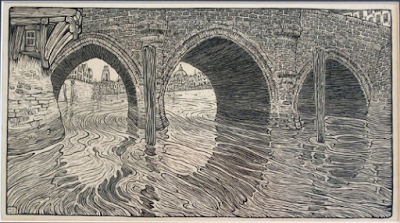 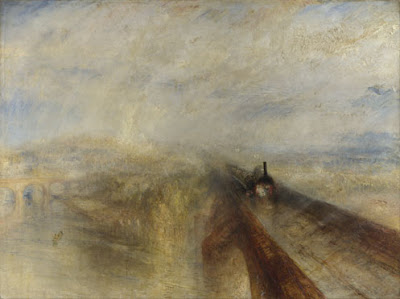 
All pictures borrowed freely from the internet for friendly, educational and non commercial use only.

This posting is about a something that is bothering me and keeping me busy for a long long time. To be more precise: prints by printmakers I can not find anything biographical about in the Internet, Artist Index or reference books and prints that show too much similarities to be just a coincidence. I ask the help of readers to solve this mystery. Is it the output of a printmaking collective or are they printmaking friends, a school perhaps ? The signatures however seem to be written by different hands.

Print collectors and other enthousiasts must have noticed certain similarities following the works of these printmakers. To begin with:

Thea Gütmann-Voigt
(these 12 prints by her hand, two of them with a monogram TG): of all printmakers I've been researching it has been to this day impossible to find any clue or anything biographical about her. Gutmann or Gütmann is a Jewish name but it could very well be she was born as Thea (Dorothea, Theodora) Voigt. The Thea Gutmanns I followed leading to no identification yet.

As goes for these following names/artists (or could it be one and the same ?)

Ruth Lundbeck
(three examples known to me with this signature ) 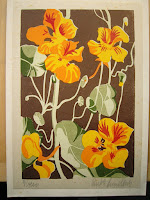 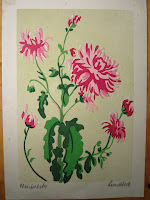 A(?) Thies
(or something similar, just the 1 example, these Poppies are known to me). 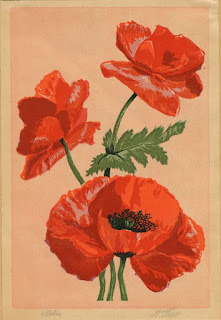 The prints I've seen and in some occasions collected (not all !) are mostly printed on identical papers, are very similar in style and execution, and in several cases prints with different signatures were equipped with the same blue wove backing paper, although in three different shades. In one occasion prints were kept and send in this rather nice paper-folder with "Japanische Holzschnitte" (Japanese woodblock prints") in calligraphic writing. 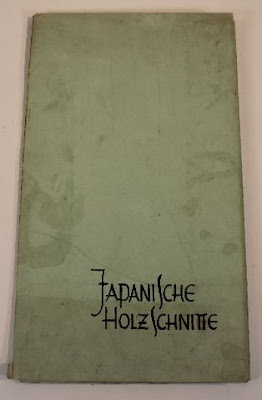 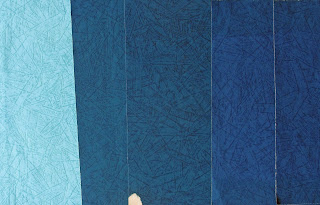 It has happened prints by different artists (different signatures) were sold together in one lot. And with one exception: they all are, kind of, botanical prints: showing flowers.

In any case with this posting from today there's now a reference on these rather nice prints available. All help, additions and suggestions would be most  welcomed.
Geplaatst door Gerrie op 15:02 4 comments: