Finding a new, not mentioned before, forgotten printmaker with a nice find (print) after so many years of researching women German printmakers, is not an every day event. It happens sometimes with the help of friendly readers, fellow collectors with a heart for history and combing the beaches and shores of auctions and washed-up and discarded art: Ebay. 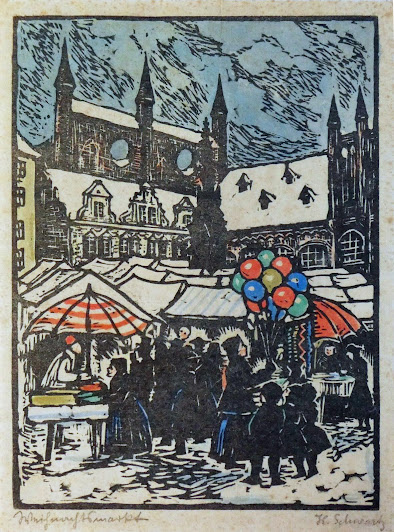 As a printmaker Hildegard Schwartz obviously is not acting in the same league as f.e. Helene Mass or Helene Tüpke-Grande. Besides: the  print is hand coloured (by her ?) which is not exactly every prints collector's cup of tea..... But charming it is 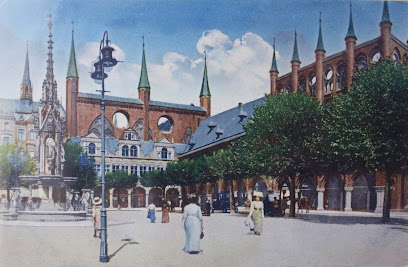 Some investigation learned Hildegard happened to be a typical local artist, illustrating local publications on local history. The half a dozen prints I was able to find show local landmarks, the surrounding villages and landscapes. She was however pretty accurate in her designs. 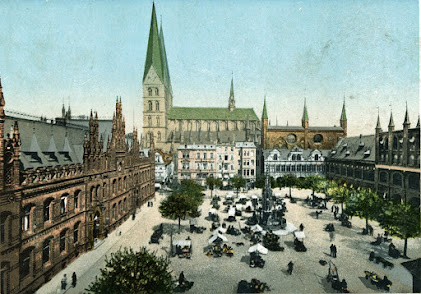 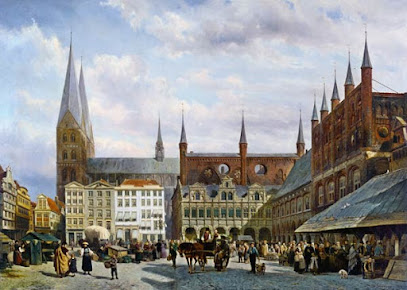 About het life (where was she born ?, who were her parents and her family ?, typical starting questions for the biographer) almost nothing is known. I have a hunch she was of local, possibly Lübeck descent: she studied locally. Hopefully an interested person "on the spot", interested  in local history joins in ....

She studied in Lübeck, acted in the Gothsmund artist colony and lived in Niendorf (not far away village on the coast (where "her family had a summer house"...........) and where she also is buried. 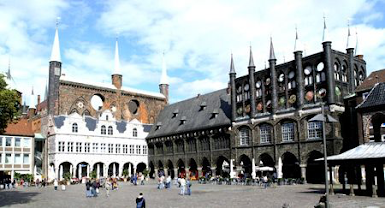 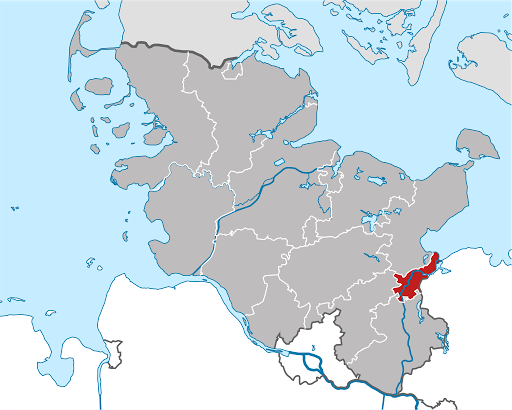 Lübeck before March 29th 1942 was one of the most beautiful well preserved medieval Hanseatic trading cities with a rich history and a wealth of historical buildings situated on the Trave river and estuary. It had Germany's most beautiful  and preserved "Rathaus" or city hall dating back to the 11th and 12th century. It lies east of Hamburg, and south of Kopenhagen. It was for centuries the gateway to the Baltic: to Stockholm, to Danzig and Saint Petersburg.
400 tonnes of bombes dropped by RAF Bomber Command in a perfect frosty moonlit night turned it into rubble. 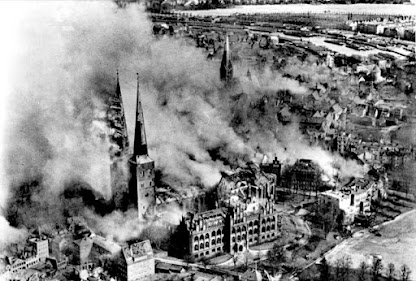 A first (!) retaliation for the destructing of Coventry (and the Baedecker raids) two years earlier in what the Nazis named "Operation Mondschein Sonate"......(they had a euphemistic name for all their atrocities). An eye for an eye....    Historic Hamburg, Dresden, Berlin and dozens of other German cities were to follow, Lübeck was just target practising.....  Tooth for tooth...... Hammurabi's Law.  4000 years of civilisation, or was it marking the end of it ? Had there been another, a civilised way ? 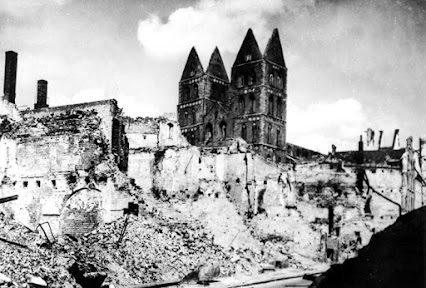 Hildegard saw the still peaceful market presumably around 1930. She lived nearby and possibly was born here. People dressed in winter cloth but the one tree (in the centre) still in leaves: october, november ? Children looking eagerly to the balloons: no cell phones yet.

Lübeck was rebuild, where and if possible, to its former glory, like Coventry, Berlin, Hamburg and Dresden were eventually rebuild. Mankind is great in repairing and rebuilding. We are the absolute champions in repairing and rebuilding. We have to be. The weakness and eventually "Untergang" of our destructive species is our greed and disability to prevent destruction. To prevent destruction while playing the Mondschein Sonata. All other species on the planet seem to have a build-in warning and survival strategy: not to completely destroy the environment from which it evolved and in which it lives, not destroying the environment of its neighbours. There seems to be something fatally, Pathetically wrong in our design. 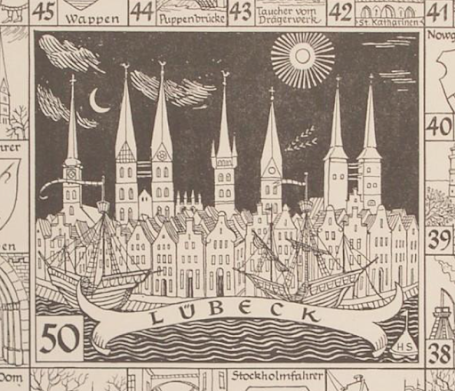 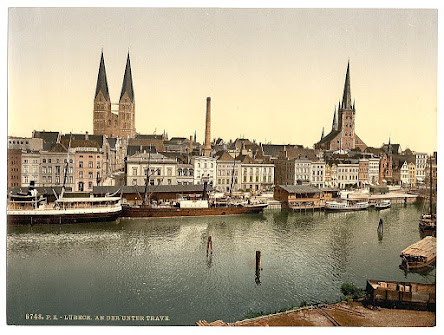 All fresh information on Hildegard Schwartz is very much welcomed: gerbrandcaspers@icloud.com

Hildegards short biography will be part of the upcoming (this winter) publication:

An ABC, a Lexicon, a Who is Who containing 400 pages of short biographies of hundreds of German women printmakers born 1850-1900 pioneering and active with woodblock printmaking 1900-1935. Their Dutch, Scandinavian and Baltic sisters, the art galleries, academies, artist associations, many of their male colleagues, the roots to the Paris printmakers, their schools (not being allowed to study in the Academies), their teachers and inspiration etc....

* This volume accompanying my collection of prints presented in Volume I and II.

Many (most) of the best loved artists-printmakers of pur times before were still never properly researched. They are collected by their name and fame and at best dates of birth and death.

"Collecting art without knowing about the artist is like collecting stamps without a catalogue"............

Sharing my archive of 20 years collecting biographic notes and the result of many years of research.

The publication date will be announced in this Blog.

The first edition will be available and printed by subscription only

(Please wait:  no reservations before).

All pictures for this Blog article borrowed freely from the Internet for friendly, educational and non commercial use only.

too good to stay unknown 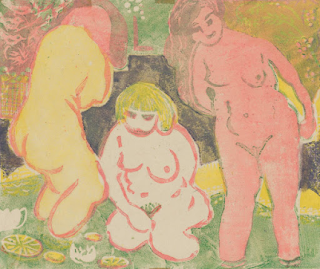 This copy of Roman Blacks 3 graces was found in the National Gallery of Victoria in Melbourne Australia; it was purchased in 1955 from the Estate of the artist. It is the only example of his printmaking I was able to find after stumbling over it accident, researching the various classic 3 Graces engraved and lithographical copies after antiquity sculptures and old-master examples. 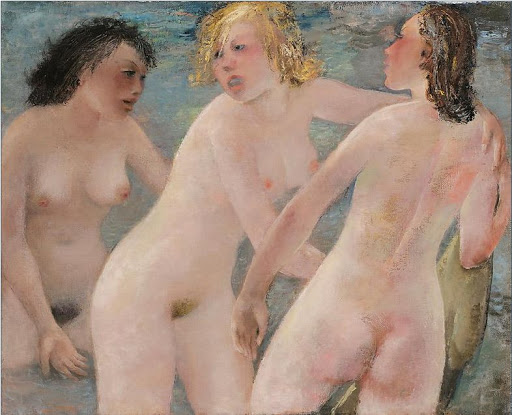 Roman Black was born in 1915 in Poznan (Poland) as Roman Ian Błachowski where he studied geography. He might be related to a prof. Stefan Blachowski (1898-1962), a psychologist and after WW-II rector of Poznan Academy. Roman Blachowski is the author of 20 scientific papers in the field of geography published before 1940.

Before WW-II he was interested in painting and had his first exhibitions in Poznań. The war found him in Great Britain where he took the pseudonym Roman Black. After the war ended he studied, among others at the Polish School of Painting in London, exhibiting his work in London and Madrid.

His naturalisation was approved march 10th 1949 (“seaman and artist, living 15 Winchester Road”). He is only otherwise known from a series of colourful linocuts with Spanish landscapes kept or exhibited in Poznan, but I could not retrieve any pictures.

A 1959 watercolour showing the historical bridge in Mostar in (Bosnia-Herzegovina) was auctioned as a lot of 4 in a 2018 sale (+ “Teatro Roman, Verona” and two others) by Roseberys in London. 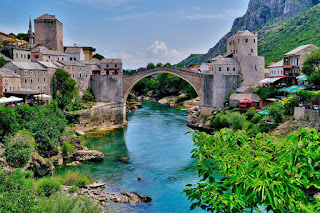 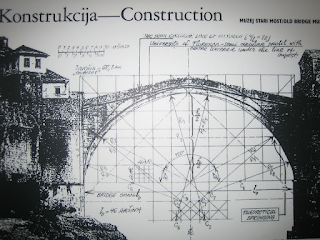 All pictures borrowed freely from the Internet for friendly educational and non commercial use only.