Some months ago these block prints (linoleum ?) showed up in Ebay and before being sold I archived the photographs. Maybe showing them together wil help reveal the identity of the maker. Someday. 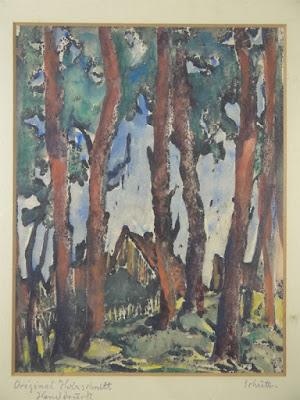 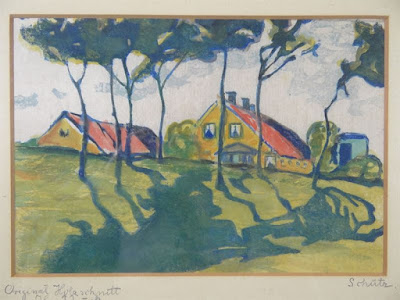 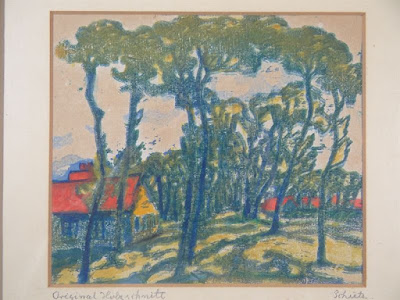 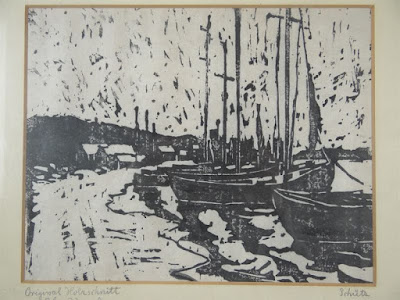 And there's this nice print that was shown in a Swiss exhibition last winter by a unknown maker: Hans Schütz. 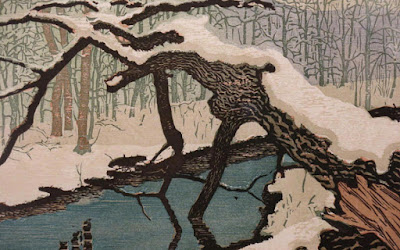 All help is welcomed.

Pictures borrowed freely from the Internet for friendly, educational and  non commercial use only
Geplaatst door Gerrie op 08:47 No comments:

Email ThisBlogThis!Share to TwitterShare to FacebookShare to Pinterest
Labels: NOID

Recently my attention was pointed to and was asked by a reader of the blog to pay attention to Doramaria Purschian, a painter and graphically active woman artist. She had not come to my attention but I agree, she should be in my index. So far I was only able to find one example of her graphic work, an etching. 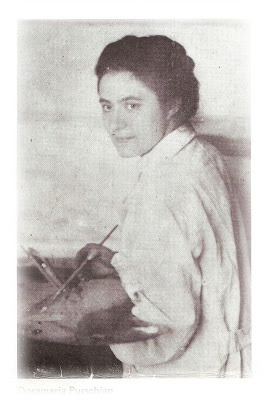 She was the daughter of engineer Ernst Purschian and his wife Gabriela, studied 1907-1909 at Berlin “Königliche Kunstschule in the "Zeichenlehrer-seminar” graduating as a teacher at drawing in 1909. She was one of the first women to graduate from an official institution in Germany, at the time very controversial: Berlin “Staatliche Kunstakademie” not accepted female students until 1919. 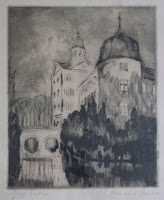 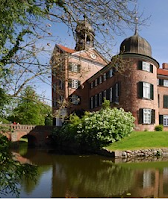 She continued her studies in 1912 with Fritz Bürger (1867-1927) and Lovis Corinth (1858-1925). Her first and very successful solo exhibition was held in 1918 in the Roemer- und Pelizaeus Museum in Hildesheim. She worked as a Red-Cross nurse in WWI 1914-1918 and afterwards as a free creating artist until 1930 and well known portrait painter. After her brother Frank died in 1939 she lead the heating company established by her father. Described as “gute Portraitistin und Kindermaler” (good portrait and children painter) in the (Nazi) “Reichskammer für bildende Künste (Leistungsgruppe B)”. 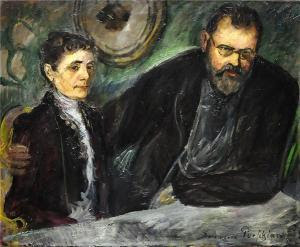 After WWII she received a "Mention Speciale" during the 1969 New York "2nd Exhibition of European Painters in the U.S.A.” and an honorary membership in Rome’s Art Academy. 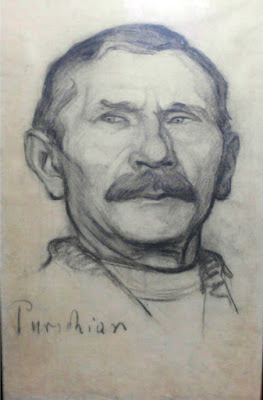 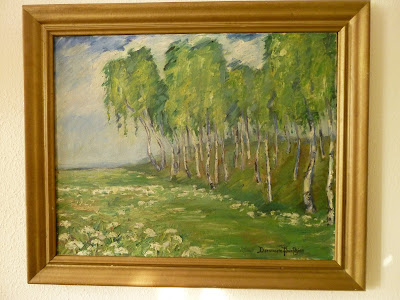 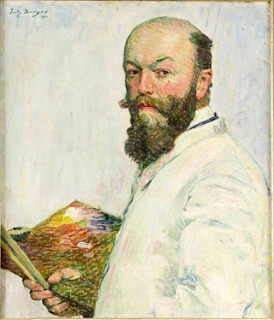 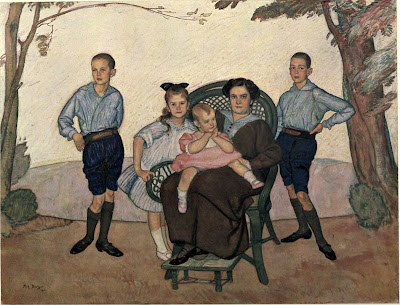 Exhibited from 1895 in the Munich Secession and at the “Großen Berliner und Dresdner Kunstaustellungen” and was awarded many silver and gold medals. He was a celebrated portrait artist painting many of his contemporaries and was highly praised for his children portraits. Bürger is from Swiss descent. Besides his portraits he known from a series of 1898 lithographs: "Frauentypen vom Münchner  Künstlerfest".

He married sculptor, painter and arts and crafts artist Sophie Hartmann (Munich 23-05-1868 – 1940 Munich), selftaught but also studying 1884-1887 at Munich “Königliche  Kunstgewerbe-schule” at the “Damen-akademie des Münchners Künstlerinnenverein” and at the “Académie Julian” in Paris where she met her husband. 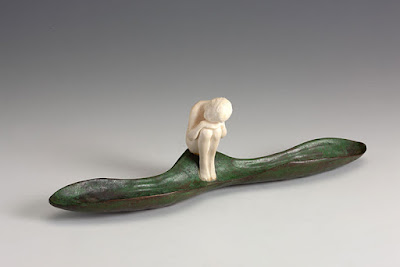 Like her husband she was an international award winning artist 1900-1907. After a stay in Dürnbach they moved to Lindau in 1922 and after the death of Fritz Bürger she moved back to Munich. 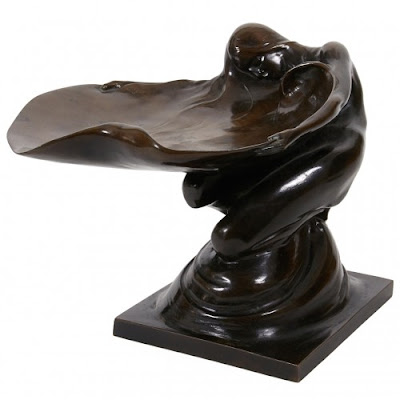 Dresslers Kunsthandbuch 1930: M.: Ge. (“Malerin, Gewerblerin”, painter and arts and crafts artist), Reinsburgerstrasse 10.
Note: Gottlieb Daimler (Däumler) (1834-1900) automobile pioneer and founding father of the Daimler-Benz (Mercedes) Motor Company originated from the nearby village of Schorndorf. There may be a (although not direct) family relation, Gottlieb had three brothers: Johannes (1832), Karl-Wilhelm (1840), and Christian-Albert (1845).
She was a contemporary to Stuttgart  painter Helene Wagner (1878-1956). 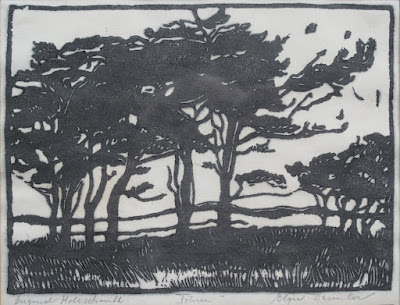 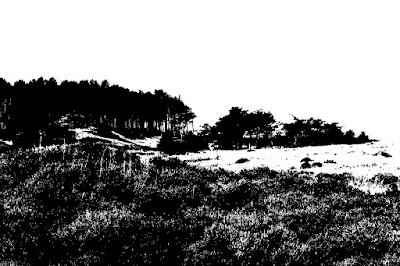 I was pleasantly surprised recently finding a woodblock print "Föhren" (Sea pines) in a local car boot created by a German woman printmaker who was completely new to me. So here's what I was able to find out researching a bit. 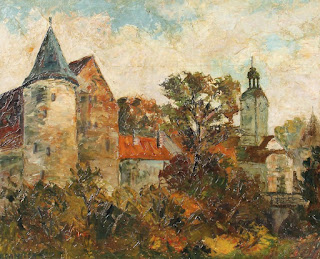 She studied in Stuttgart “Kunstakademie” with Christian Landenberger (1682-1927) and also in Munich (probably also with Landenberger who taught in both academies) and Paris. So far this is all I was able to find out besides a handful of pictures of paintings from auction sites. (South German) Landscapes, a still-life, a nude etc. 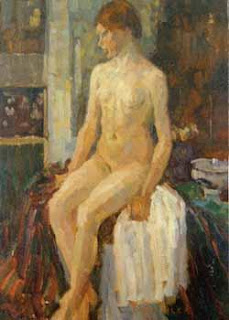 The most interesting painting, to me, by Elise Daimler is this 1912 painting showing the Dutch village of “Bergen aan Zee”. 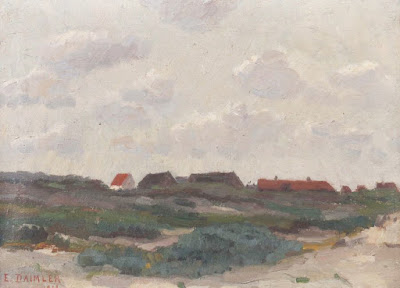 Following the year (1912) on the painting I'm convinced she was in the company of her teacher Landenberger (and/or his class) visiting the Dutch coast. It is recorded Landenberger travelled to the Dutch coast that same year. Their company, traveling from Amsterdam no doubt, will have embarked at this platform in Bergen. 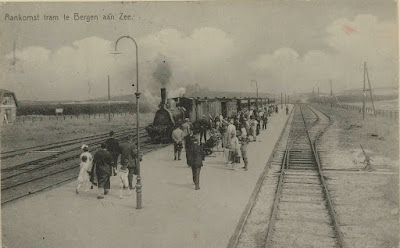 And probably stayed in Hotel "Prins Maurits", the first Hotel to be build in Bergen. 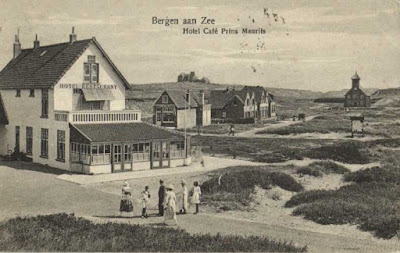 Elise's teacher Landenberger is an interesting figure (see his short biography below), an impressionist painter, professor in Stuttgart Academy and an advocate of "plein-air" painting ("Freilicht-malerei", outdoor painting). He'd become quite known in his time, awarded and famous for his many paintings of bathing nude boys. 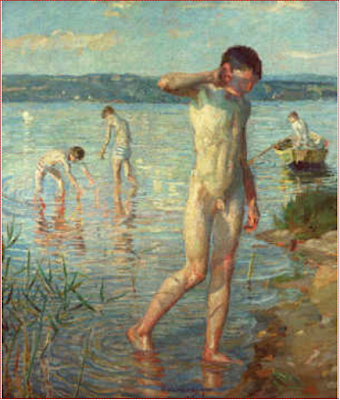 The "Badende Knaben" theme probably "invented" by Max Liebermann (1847-1934) a decade or two before. Liebermann was a frequent visitor of the Dutch North Sea coast and came often from Berlin to paint. Like his colleague Lovis Corinth (1858-1925) and many others

And from the "Sammlung Elise Daimler" (probably from her personal estate) comes this "Pierette" by Stuttgart fellow artist Clara Rettich (1860-1927). The intriguing look in the eyes of the beautiful sitter (is it a portrait of Elise ?) is astonishing. And what its the meaning of the clowns costume ? Leaving the painting untitled, undated and unsigned is puzzling and maybe suggesting a very close personal link. To my knowledge both women never married. 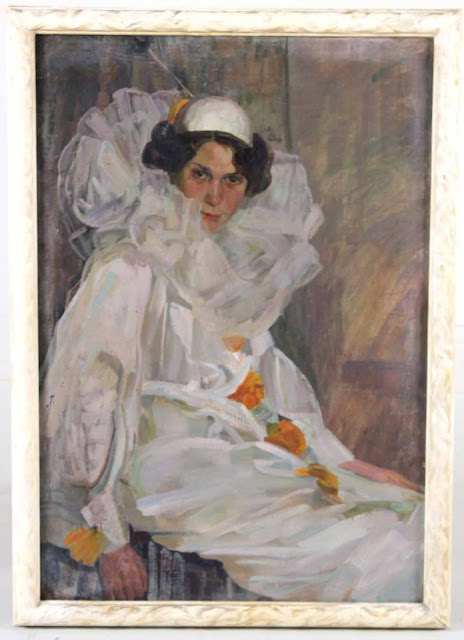 Clara Rettich proved also to be an interesting yet obscured artist. Born in New-York she studied and lived in Stuttgart (I have no idea why she chose Stuttgart and not Munich, Paris or Berlin). She was asked by antroposophist Rudolf Steiner to paint some of his esoterical designs  (the s.c. "apocalyptic seals") in oil.  And she is known to have worked in needle-work also. 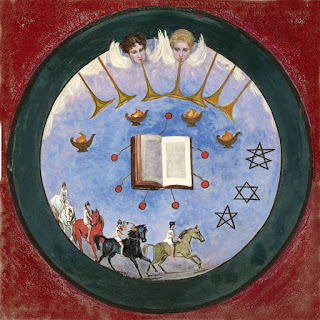 If you happen to stumble over this posting: please send me further biographical, artistical and genealogical (Stuttgart/Schorndorf Daimler family) 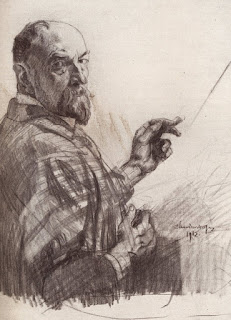 Impressionist painter and professor, who was appointed in 1905 in Stuttgart “Kunstakademie” after  a  gold award winning "Badende Buben" (nude bathing boys). Studied from 1879 at Stuttgart “Kunstschule” with Jacob Grünenwald (1821-1896) and Carl von Häberlin (1832-1911) and in Munich “Kunstakademie” 1883-1887 with Frans (von) Defregger (1835-1921). Founding member of the Munich Secession exhibiting regularly from 1916. In 1895 he established a private painting school and teaches 1899-1905 at Munich of the “Münchner Künstlerinnenvereins Damen-akademie”. He is an advocate of outdoor painting (“Freilichtmalerei”). Travels to the Donau, Black Forest, Bodensee (Sw.), Norway, the isle of Sylt and the Dutch coast (see his student Elise Daimler). He is known of his series of bathing boys (“badende Knaben”) created between 1893-1915. Helene Wagner (1878-1956) a Stuttgart painter had also  been his student in Munich.


All pictures borrowed from the Internet for friendly, educational and non commercial use only.