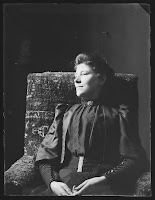 
Portrait by her friend, the painter, early photographer and etcher Willem Witsen (below) 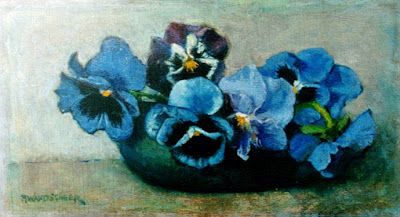 In last posting I mentioned Marie Wandscheer being the painting teacher of Fanny Psicha. What better opportunity (before returning to a new chapter in the Antwerp theme postings) sharing some fine examples of her work. Marie Wandscheer until very recently was a somewhat obscured, neglected and forgotten painter but recently some new attention was brought to her. After initially painting nudes, which was en-vogue for lady painters in those days, she was persuaded trying at "gingerpots and flowers" by painter Jan Voerman Sr. (1857-1941) whom I showed before on the Blog. Well, here they are, a dozen or so little gems brought together in the Linosaurus.

Marie entered the Rijks Academie in Amsterdam in 1876. Living and working in Amsterdam at first but later she moved with her family and also painting sister to the provincial town of Ede around 1895.
In Ede she met again her old Amsterdam Academy class mate painter, photographer and etcher Willem Witsen (1860-1923). Witsen returned from his stay in London (1888-1891) and just married, taught her how to use the etching needle. Witsen, mr.painter and etcher also was mentioned before on the Victoria Embankment (link above). I will show more of his atmospheric London prints shortly. 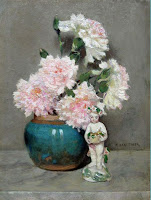 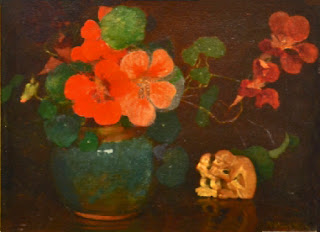 These contrasting last two lovely impresionist flowers in gingerpot could have been among the last Eduard Manet (1823-1883) ever did in this world: see his famous "last flowers" in the Linosaurus here. 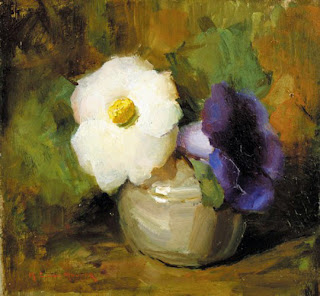 (her portrait, probably by her Academy teacher and friend Marie Wandscheer (1856-1936) who was a close friend of Willem Witsen, one of Netherlands great etchers. Maybe explaining the quality of this only known graphic work by Fanny. 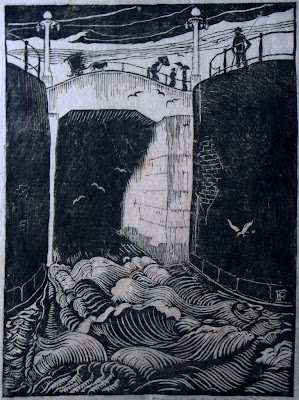 Today, interupting the Antwerp and Verpilleux postings I'ld like to share this remarkable woodblock (25x30 cm) print. The grain of the block is clearly visible and it's monogrammed FP in the block. The perspective and composition is reminding of James MacNeil Whistler's (1834-1903) "Nocturne": Battersea Bridge, Hiroshige, and other Japanese equivalents. 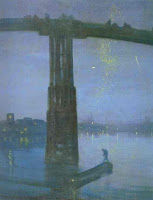 Discovering the figures and the horse and carriage on the bridge actually being Japanese was an even bigger surprise. The silhouetted figurines resemble Yoshimune Arai (1873-1945)(above) and Shoda Koho (1870-1946), below. Recognizing the Amsterdam Canal and Bridge by an observant reader would be a great help. I don't think Fanny ever visited Japan. 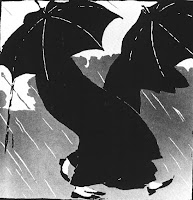 Fanny was accepted 1887 (23) as "Fanny Psicha, born 1866" in the "Rijks Academie voor Beeldende Kunst" in Amsterdam and was a student untill 1892. The year of birth a slight difference with her official date and closer to the date of her mothers marriage in 1867 (see below, maybe for social acceptance reasons.) 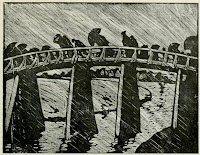 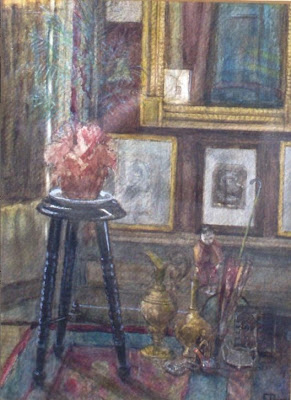 Trying finding out more about the artist at first I had very little succes, untill I found these paintings of Dutch interiors signed Fanny Psicha. The one below left, once belonged to Queen Juliana of the Netherlands (1909-2004). The others I found in old auction cataloques. No other examples of prints were found. 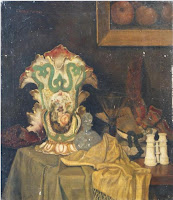 Here's some genealogical data which with some difficulty I managed to put together from the internet:
Fanny's mother Klaartje van Kooten (Antwerp 1842-1914 Amsterdam) was of 100% Amsterdam Jewish descent but like Fanny was also born in Belgium). She married Antoine Psicha (Amsterdam 1837-1911) in 1867. Antoine Psicha's book on the theory of  "the birds eye perspective" was edited posthumously in 1912. I couldn't find any other children and I don't know if Fanny ever married.

Only a handfull of Psicha family members actually lived in Amsterdam middle of the 19th century. There's a Liverpool merchant and ship owners branch (Georgi), and there are two refugee brorhers from the  Chios Diaspora (the Turkish massacre of the Isle of Chios in 1822). One named Antoine, and perhaps travelling from Chios through Marseille to Amsterdam to related families. The Greek Consul in Amsterdam was named C. Psicha, and had a brother both living in great wealth in Amsterdam.

To the family name Schweistal I regretfully found nothing at all, neither in Holland nor in Belgium nor anywere else.
Geplaatst door Gerrie op 10:48 3 comments:

It would be interesting comparing Verpilleux’s British Museum print with works by his colleagues of the period who also choose similar classic-revival buildings. The more I look at Verpilleux' prints the more I am convinced he deliberately choose a different approach from his colleagues. A view not done before (Edinburgh, York), an even grander panorama (river Thames), a daring perspective (Tower Bridge) or like here, a careful choosen detail of the front entrance of the British Museum. 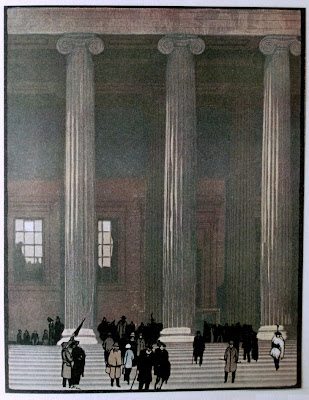 This section of a very recent photograph (right) showing  how accurate a woodengraver and printmaker he was. Nothing much has changed in a 100 years except for maybe the fashion. In earlier comments it was discussed photography may have been used creating composition. A posting is already in preparation showing the photogravures of enigmatic William Hyde proving the interaction, use and thin line between early photography and other forms of Art. 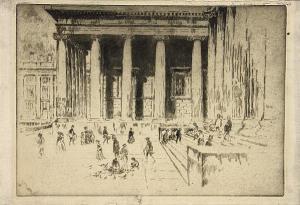 The British Museum (designed by architect Robert Smirke) was opened in 1847. American etcher Joseph Pennell (1857-1926) when living in London (untill 1914) had his own studio on the Adelphi Terrace overlooking river Thames and also had a keen eye for  drama and perspective. He created these two British Museum prints. The two artists actually may even have met. Pennel also staging, suggesting crowds in the lower margins in most of his prints, like Verpilleux and August Lepère (see before postings). This is perticularly the case in both artists New York high-rise prints (later) 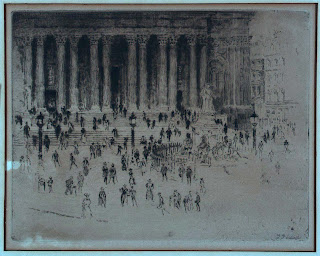 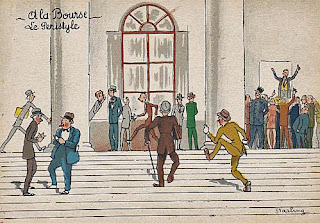 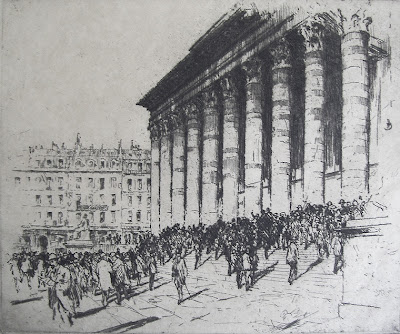 like this other great artist Emile Verpilleux may have met either in London or in Antwerp: Frantisek Tavik Simon (1877-1942). Simon is said to have visited Antwerp and Holland while living in Paris, the years Verpilleux studied there. He later stayed and worked in London when Verpilleux had returned in 1910. 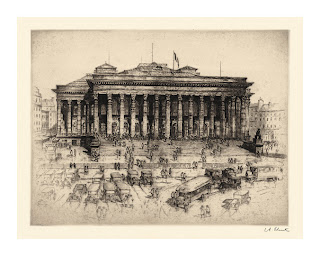 Anton Schutz (1894-1977) a German printmaker (left) who later immigrated to the US and made it to fame and glory as a printmaker of American city-scapes was here too. 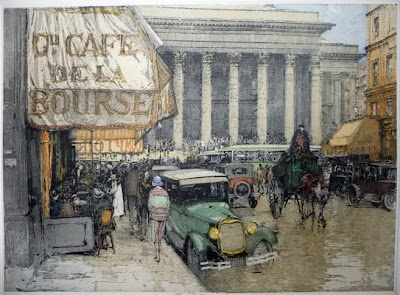 And Luigi Kasimir (1881-1962), in spite of his Italian name, Austro-Hungarian innovator of color-etching was inspired creating one of his most interesting works here (above). It is certainly one of his most entertaining. Kasimir was in London too, have a look at both his and Verpilleux' Tower Bridge print here*

Also by Luigi Kasimir is “Eglise Madeleine” a neo classical colonnade church. Building started before the French Revolution and was at last completed in 1842. Chopin’s funeral ceremony was held here a few years later in 1849. His last request was Mozart’s Requiem to be played. The service was delayed for two weeks allowing for the exception to be made for female choir members attending in the church. But invisible, singing from behind curtains was the comprise. 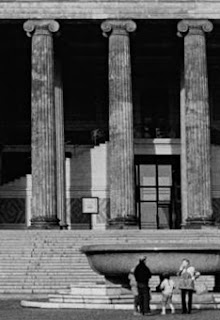 In Berlin the “Altes Museum” by architect Karl Friedrich Schinkel was similarly build 1823-1830 on the Museum Insel. The entrance closely resembling the British Museum. Or is it the other way around. Just a coincidence?

In the Victorian era similar neo-classical buildings were designed and build in many places in the Old and New World.


National Galleries, Banks and almost every Stock Exchange Building was designed with classic columns. Showing-(off) wealth (companies), good taste (city officials) and to impress mortals (tax and insurance payers). Creating a feeling of safety and stability.
After a century and a half in the case of the National Galleries only this seems to have been justifiable architectoral symbolism. Like the stability they once symbolised  the columns have all but disappeared from modern buildings today. 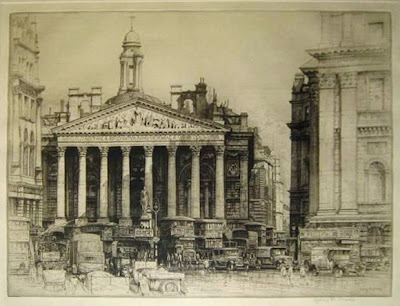 The list of similarly designed decorative and impressive buildings is as long as the list of artists and photographers portraying them. Sydney Jones (1881-1966) and his rendering of the Royal Exchange (above, collums of the Bank of England on the left) the last example for this posting. 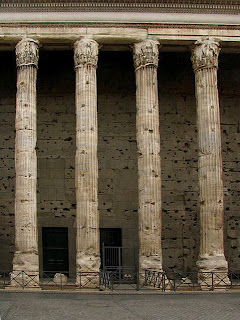 The new Rome Stock Exchange was designed and rebuild just before the Victorian age and may have set the example and revival to Victorian Europe's city architects. In Rome they re used the actual columns (those that were left) of Hadrian’s palace.  Some 15. 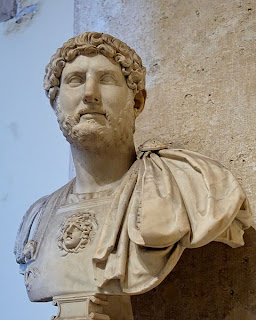 Emperor Hadrian (76-135 AD) middlest of the Five Good Emperors might have walked the Londinium Hills during his visit in 122 AD, thus nicely closing the circle of this posting on Verpilleux' 3 British Museum pillars.

Question: Shall I continue with another posting on Verpilleux' prints , or move on ?
Geplaatst door Gerrie op 09:03 6 comments:

Around Antwerpen School of Printmaking (VII)

Westminster from the Victoria Embankment

While researching the Verpilleux’ Thames woodblock print in last posting, strolling along the Victoria Embankment I’ve encountered almost all important artists of the 1870-1930 period. British painters and etchers, French Impressionists and a good many visiting artists from all over Europe and America. 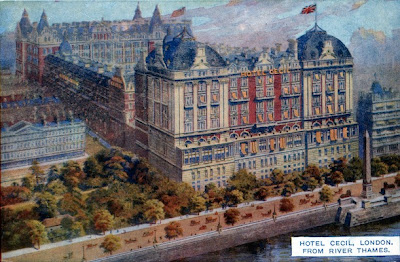 After the views from Waterloo Bridge towards Westminster (also last posting) now following is a selection of similar views but seen from the Victoria Embankment it self, constructed and completed in 1870. 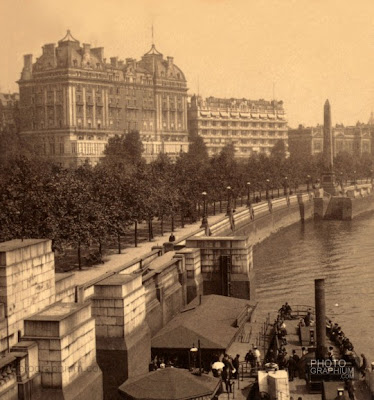 What better position then high up from the Cecile Hotel allowing the highest and most dramatic and spectacular panoramic view over River Thames. Depending on the angle of view Cleopatra’s needle (erected 1878 in front) is either overlooked or visible as a landmark.
Most artists choose this view West towards Westminster showing Hungerford Railway bridge (replacing the old Hungerford suspension footbridge in 1860), Westminster Bridge and Lambeth Bridge on the horizon.
Claude Monet did several (a great many) others, from this point also in the other direction (the famous Waterloo Bridge series. Later). 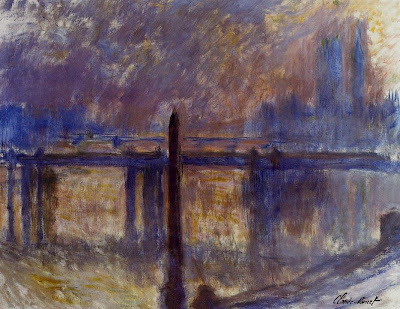 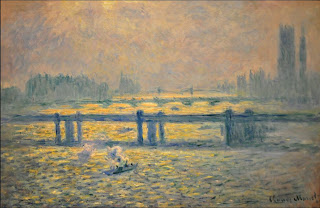 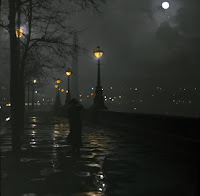 Leaving the Victoria Embankment, but not London, dismissing all great works of Art viewing the other side, so towards Waterloo Bridge, here are a few more encounters and views towards Westminster from the pavement. Like the view from American artist Joseph Pennell's  (1857-1926) sudio (unitill 1914) on the Adelphi Terrace (below)

On a rainy day I promiss to make up and return to the Embankment. Walking East towards Waterloo Bridge (right) meeting Emile Claus (1849-1924), the Belgian Impressionist refugee who had a studio on the Embankment. Like printmaker Henri Wils (1892-1967), the starting point of this series, he also fled Antwerp in 1914. Wils ending up in the Netherlands.

Next: The British Museum: London woodblock print by Emile Verpilleux. And some more fresh biographical discoveries.


Please note: there are many more photographs, paintings and other works of art of and from this location. This is just my selection.
Geplaatst door Gerrie op 10:03 4 comments: