His life was a mirror of the history of the first half of XXth century Poland. A painter, a designer of stained glass windows, mosaics and polychromes, a specialist in Japanese style wood engravings, a ceramist, a stage designer, a graphic artist, and a draughtsman. 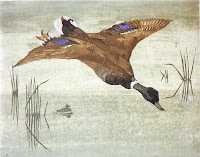 left: "Dzika kaczka" (1927) wild ducks by Adam Bunsch and right by Allen Seaby
Also playwright, an original thinker and a man of the deepest convictions and beliefs. 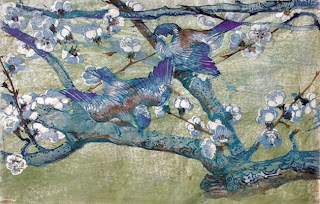 "Sikorki modre", Blue tits in cherry tree (1953)
It is not difficult to see who were Adam Bunsch’ printmaking heroes. Trying his best in the Japanese traditional printmaking way German Walter Klemm (1885-1957) and British Allen William Seaby (1867-1953) obviously a source of inspiration. Both in choise of subjects as in printing style.

Goldfinches by Adam Bunch. he did many so I can't tell the year of creation

and goldfinches by Allen Seaby
The retrospective exhibition held a few months ago in London speaks of his actual presence in England as a war artist. This, I think, is a great opportunity asking my friend Charles of Modern Printmakers (M.P.) to let his expert light shine on the matter.

left: "Szczygly" 1962, right "Pszczoly", Bees on apple blossom (1946)
After my sheer coincidental encounter with Adam Bunsch I found and purchased his Catalogue Résumé in Poland, revealing some more use-able for the Linosaurus pictures of woodcuts with publishing dates. Which in the case of comparing Bunsch with Seaby is not a big help because Seaby didn’t leave notes on dates of his editions (acc. to Charles, M.P.) 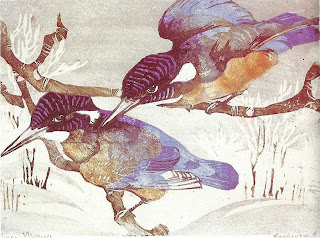 and by Allen Seaby and  by Walther Klemm.
All written information in the booklet however is in Polish. What I could make up is Bunsch travelled Europe in 1928-29 (Paris, Rome, Florence, Venice and Vienna) and as a war artist was again actually in France, England and Scotland in 1940-45. 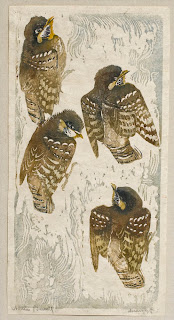 "Piskleta" fledgelings (1936) and  right: "Bazanty", pheasants (probably 1963)
Between 1926 and his death in 1969 he produced some 88 woodcuts mostly of animals. Goldfinches (thistle finches) a favorite: he did several, like Seaby did several kingfishers. But also poultry, pheasants, ducks and fishes. Motives also choosen and loved by Walter Klemm. Dogs and cats also a favorite. I managed to find some 18 prints in colour that I'm showing here. Hopefully more examples will show up after this article/posting for all to enjoy. I've seen some pretty spectacular examples of roosters, birds of prey and owls but in black &amp white thumbnails. 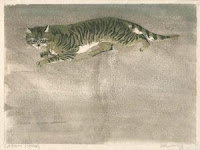 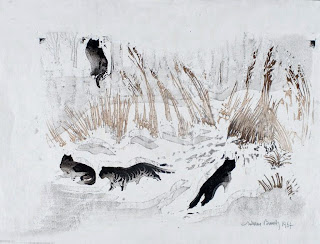 The Japanese application and use of paint, like a watercolor wash, and blocks used for  background are also very reminding of printmaker Erna Fenkohl-Herzer (1882-1975) whom I rediscovered and showed her works in the Linosaurus: see here*. 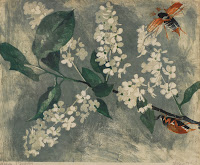 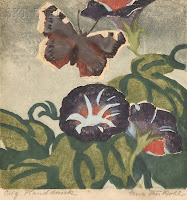 POSK, The Polish Catholic Mission of England & Wales and the Sikorski Institute and Museum have joined forces to present this joint retrospective exhibition of Bunsch's works in their possession to awaken the memory of a man who impacted on so many from the young Karol Wojtyla, the future Pope John Paul II, to visitors of the Paris 1937 Exposition Internationale des Arts et Techniques dans la Vie Moderne Exhibition and the New York World's Fair in 1939 and many international dignitaries of his time (from the recent London 2012 cataloque). 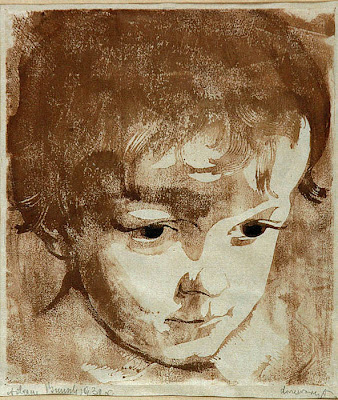 Frantiszeck (Frances) Bunsch: an unequaled delicate portrait (1933) in woodblock print of Adam Bunsch' son Frances (1926), above, who followed in the footsteps of his father a career as a Polish artist and professor.

left: "Cerkiew" (church) 1926, right: "Glowa" 1935
I'm convinced showing together all these very original and rather unknown prints with such unexpected quality by this hardly known outside Poland Modern Printmaker will be the starting point of a renewed interest. Like earlier publications in the Linosaurus have proven before: Karl Johne, Erna Fenkohl, Viktor Pirkhoff, E. Meinshausen-Felsing  among others. 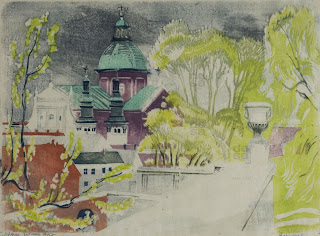 All examples shown are mouse-clickable.

I know readers and occasional passers-by are all busy people but please: consider leaving a comment as a signal of appreciation or just out of politeness. Composing these postings takes a lot of time and effort. Finding my writings and "my" pictures used all over the internet without leaving a word, a reference or even something simple as a "hello" or comment is increasingly  frustrating and will, in the end, result in ending of sharing my new findings and closing the Linosaurus Blog alltogether.
Geplaatst door Gerrie op 17:53