Martin Erich Philipp
(Zwickau 1887 - 1978 Dresden)
&
Else Staps
( ? )
On my Odyssey through the land of printmaking and printmakers, educating myself along the voyage I’ve wanted to write this posting for some time but found it difficult to start. Without research on the spot or in museum archives it is very hard to scratch enough facts together making an article worthwhile.  Most of the knowledge about printmakers, with the exception of maybe the most famous, is privatly owned and held anyway. Some good Blogs bringing together and accumulating bits and pieces. Everything helps. So here goes.
Being busy assembling my personal catalogue (page button above) of Martin Erich Philipp’s color prints with good quality pictures from the www I’ve stumbled over some items that made me wonder and think. 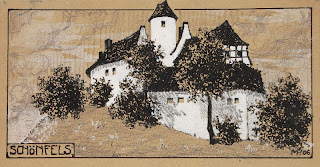 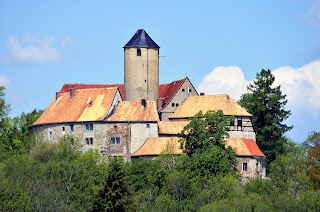 Martin’s career start has been documented as “freischaffend Künstler zeit 1913” (independent artist from 1913) after his training in Dresden’s "Kunstgewerbe (Arts and Crafts) Schule" (1904-1907) were he was to become a sculptor at first and later at the "Kunstakademie" 1908-1913 changing his destination towards printmaking. Thankfully. 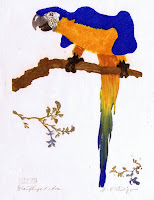 His first 7 woodblock prints are dated in Götzes' Werkverzeichnis 1907-1909 and his first parrots, "Aras", D5 and D6, above, dated 1908. 20 years of age and just in Art School. His first print after finishing his education (D8, the 3 snake Eagles) was immediatly awarded a gold medal in the famous Leipzig Bookdesign and Graphics Exhibition (Bugra) of 1914. The last one before the Great War began. What a away to start a career. I found his study dated 1908 !

His lifelong fascination for parrots and the female nude is already evident in the above painting "Damenakt mit Ara's" dated 1907 when he was just 19. And in this (academic) drawing below, in a difficult perspective, dated 1913. 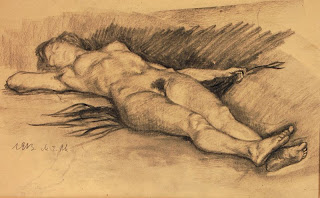 But these two watercolor drawings (below) auctioned as by MEPH (not even "attributed to") made me wonder however about the accuracy of today’s auction house documenteers.
They are actually the studies to these woodblock prints below, by the hand of Else Staps and probably dated with an educated guess by the auctioneer as "around 1910" and "around 1920".

Maybe you knew Else Staps was Martins wife. I did not. Only recently I found out along my journey. It is nowhere documented on the www. They married in june 1925, probably in Zwickau and Martin documented it himself. 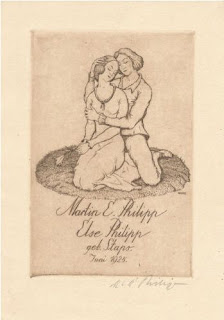 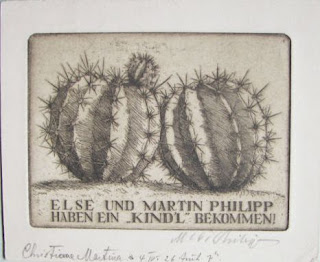 I think the father is trying to tell us something about their characters in his amusing announcing-to-the-world card. I could not find any mentioning or biographical dates of either women after januari 1927 (below) 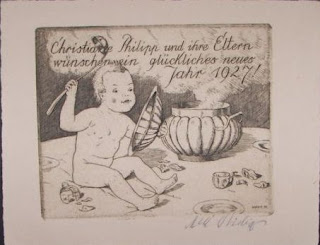 I know of 4 different woodcut prints auctioned (flowers or plants in pots) made by Else much in the style of her husband. One of them is the above rose-hips. And like her husband she must have loved birds.


And they must have been arguing and deliberating “who does who” concerning the titmice in the garden and the birds in Dresdens Zoo Aviaries. It must have been a happy household in Zwickau those years cutting and printing together. Man and wife, teacher and student ?

And this nice bouguet of roses in a great yellow Art Deco vase, monogrammed E.St. recently showed up. An aware and lucky buyer and an unaware seller. 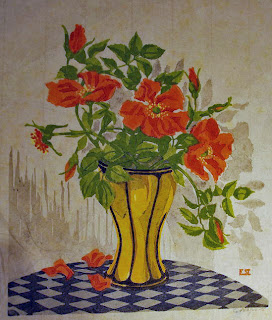 Another intriguing question is if Martin Erich Philipp anywhere shows his wife in any of his many portraits and nudes. He did a good many self portraits so I guess she must be in there somewhere.