After a sabbatical and Blog-"retraite" I salute new visitors & welcome back all revisiting old friends.

This is the account, résumé or summing up of my recent investigations into the forgotten life of Berlin flower painter Rahel Bodlaender. I stumbled over her name in another of my research projects: that of Berlin Secessionist and flower painter, portraitist and leader of the VdBK drawing classes  George Mosson (1851-1933), in his life-time an artist of great fame, but today like Rahel almost completely obscured. Unlike his many famous Berlin fellow artists (Max Liebermann, Lovis Corinth) George Mosson has never been the subject of any serious research leading to a monograph or cataloque résumé. This posting is the introduction to the next composed around his person and his work.

All help, corrections and additions are welcomed.
All my genealogy and other findings shared on request. 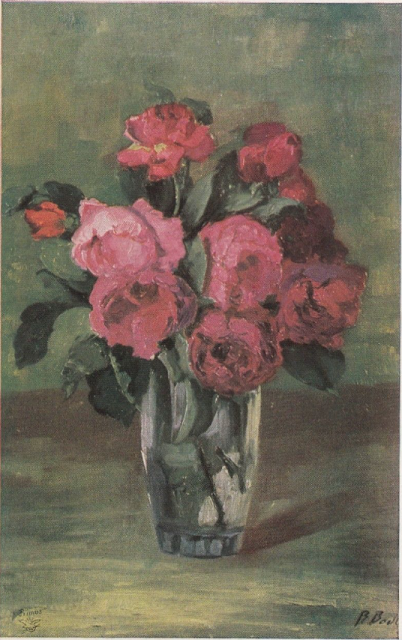 Painter of flower still-life. Not known as graphic artist. Daughter of Wolf Bodlaender and Berta N.N. Her mothers family name is still unknown. Her father is probably the teacher (“Lehrer”) Bodlaender who is permitted to start a Jewish elementary school in Ortelsburg (Szczytno) in East Prussia in 1863 for a limited period of 3 years. Rahels sister Grete was born in Ortelsburg a year later. Another sister Lina (Eveline) however was born in Dirschau (Tczew) in 1869 near Gdansk in Pommern, some 100 km Westwards an indication Wolf Bodlaender and his family left Ortelsburg and moved from Ortelsburg to Dirschau ? 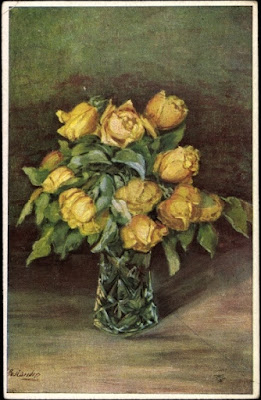 In the official death certificate in Theresienstadt of her younger sister Grete the names of the parents, Wolf and Berta are mentioned. On their deportation the three sister lived together in Berlin at Siegmunds Hof Nr. 6. in the Tiergarten district. 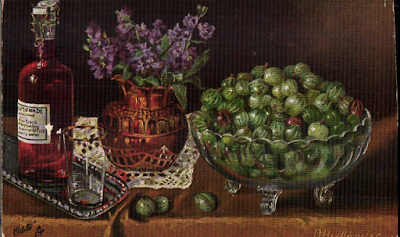 Rahel Bodlaender (she signed her work R. Bodlaender) today is known by 4 oil paintings (a kind of Biedermeier interior still-lives) and 4 postcards “after paintings by the artist” published by Wohlgemut & Lissner, the Berlin quality printing and publishing house of all well-known graphic artist in Berlin.
Nothing is known about where, under who or when she studied or which year she (and her sisters Grete and Lina) came to Berlin, nor how they might be related to the other Bodlaender families living in 19th century Berlin. Their specific family name indicates they must be all related to a pinpoint location somewhere around 1800. 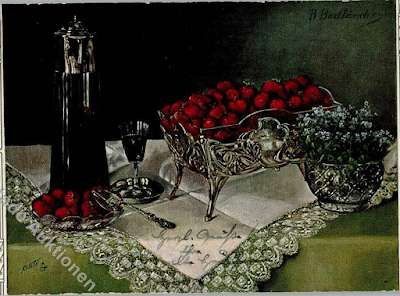 In the second half of the 19th century and first decades of the 20th, a dozen to two dozen Bodlaender family members lived in Berlin. Merchants,  doctors,  a vet and a urologist; a lawyer and a colonial ware shop owner, widows and single women school teachers. But  what ties the Bodlaenders together seems to be an area in East Prussia, also known as “Ober-Schlezien”. More specifiquely the area  around the small town of Rosenberg. The woodland district is locally also known as Bodland. In Rosenberg and its surrounding villages (dwellings) the first Jewish settlers are said to have arrived in the second half of the 18thcentury. The area since the 18th century is known for its thriving glass industry attracting many new settlers. Among them many were Jews from the eastern regions of Prussia known as Masuria.

The link to the Bodlaender family name can also be found in the name of the village: 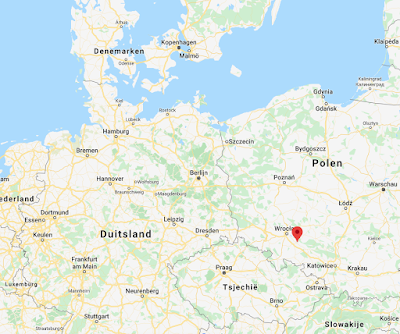 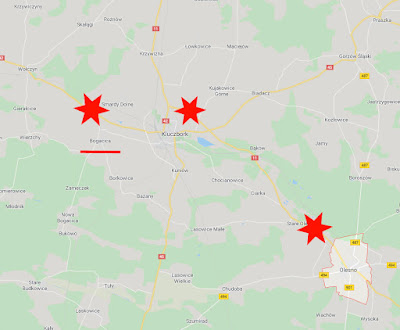 Following  the genealogical trails of several 19th century (Berlin, and Prussian) Bodlaender families they all seem to lead  to 1750-1800 Moses, Salomon, Samuel (Wolff and Louis) Bodlaender.
I suppose the Jewish pioneers that settled here from other parts of Poland may have adopted the Bodlaender (meaning simply “from Bodland”) family name to their traditional Jewish patronymic names. 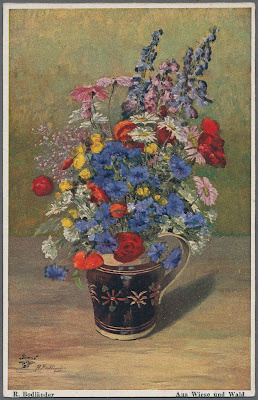 Rahel Bodlaender perished (was left to die) a week after arriving in Theresienstadt  (North of Prag, halfway Dresden) with “Transort 1/60 ” which had departed from Berlin Sept. 7th 1942. She was 79 years old. She died in the most inhumane, horrifying and desolate conditions from “ENTERITIS/Darmkatarrh”, a routine “diagnosis” found in most official death certificates after her death in this hell on earth. The Nazis were as meticulous as they were criminal book keepers. Death by starvation, by fleas, lice and infectious diseases, dysentery, typhus and cholera. In all death certificates the doctors have Jewish names too. I suppose they literally eventually “shared the same faith”. Why spend Arian doctors on old, sick and dying Jewish people that weren’t even regarded as humans ? 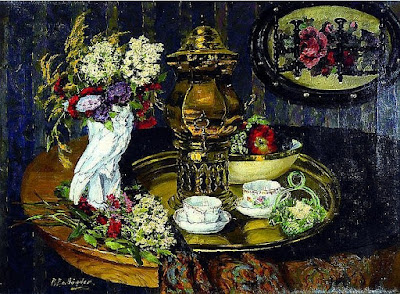 With the same cattle-wagon “Alter Transport 1/60” Rahels two sisters Grete, born 1864, and Lina (Eveline) born 1869, arrived in “Modellstadt” Theresienstadt. Lina died 4 days later with the same diagnosis (73 years old) as did Grete who held on until Jan. 12th 1943, 4 months later, 78 years old.  All together 33.430 people would die here, including 3 more  Bodlaender family members. Literature describes many of the Jewish people living in rural Eastern provincial communities left for Berlin in the second half of the 19th century. To find and build better lives.

The sisters were known last living in Berlin Siegmunds Hof nr. 6 not far from the entrance of Berlin Zoo at Tiergarten park where “Lehrerin” Lina rented an apartment in a district housing many Jewish people and had its own synagogue. A few 100 meters from where the train conveniently left. 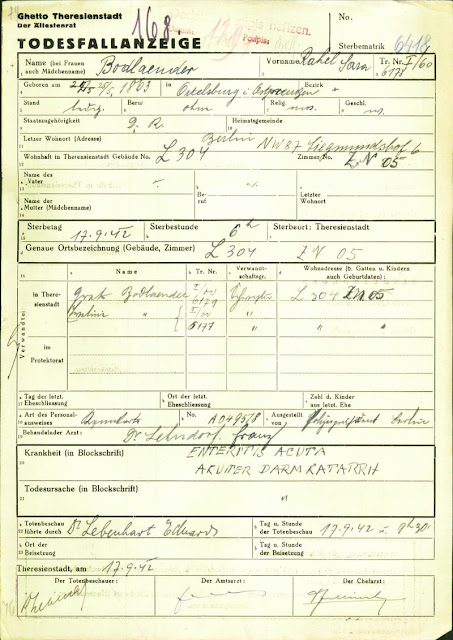 Today Rachel Bodlaender, but for the postcards and a lonely auction record, is a completely forgotten and obscured artist and I suppose the 3 sisters, once living, loving and working human beings have long since vanished from memories and faded away into the mist of history. 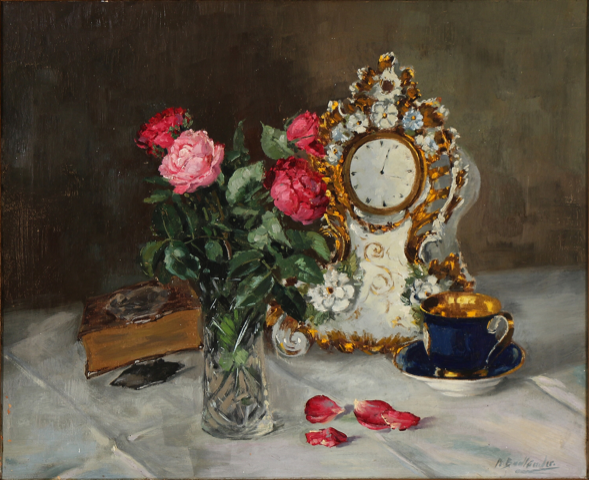 Rahel, Greye and Lina also have not yet been honoured with a “Stolperstein” Germanies sympathetic commemorating pavement brass plaques remembering the names and places were Jews once lived and from where they were torn away, expelled and deported. I intend to inform the Berlin Stolperstein project manager one of these days.

As has happened so many times before I felt compelled to try and give this artist at least a small place within the world of her sister artists in my Artist Index or Lexikon. By trying to find and re-unite her with her family and place in history. 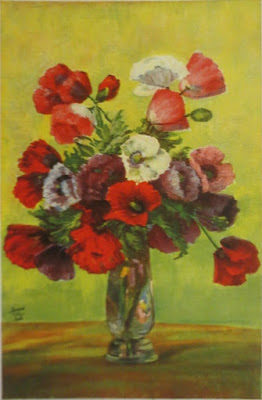 In the Netherlands I found a Dutch Bodlaender family deriving from Dr. Moritz Leo Bodlaender (1899-1968). He was born in Breslau and gave the name Wolf (Berlin 1925-2013) to one of his two sons. Dr. Bodlaender settled in the Netherland in 1935 and naturalised in 1950. Maybe the solution of my quest lies more near home then I could have ever foreseen when I started it.

Rahel is not mentioned in any of the Artist Lexicons but I found her in Dresslers Adress book 1921 and 1930. Living at Straßburgerstrasse 9. In 1931 she is mentioned  “Blumenmalerin” living at the same address and a member of the RvbK (“Reichsverband bildende Künstler”)

Please help me to find Rahel, Grete, Eveline, and their parents Wolf & Berta Bodlaender's connections and roots that must be within the Jewish community in the "Kreis Rosenberg" (Olesno) area  around 1800.


All pictures embiggen by mouse-click