Carl Thiemann’s many prints of Venetian sailing boats are well known, precious and iconic. Thiemann visited Venice and the lagoon, staying in Chioggia, the picturesque fishing port in the south of the lagoon. 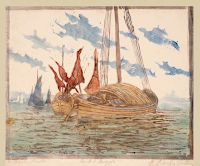 Numerous artists from all over the world created countless paintings (too many examples to show in this posting) of Venice, Chioggia and the characteristic fishing boats and gondolas either under sail in the lagoon or moored in the harbour. Here, printmakers, American Dana Bartlett (1882-1957) and Czech Frantisek Tavik Simon (1877-1942) made their sketches for their later printed lagoon impressions.

But today I’ld like to share some of the odd 40 examples I collected from the Internet over the years combined with some recently found bits and pieces concerning the life and career of forgotten Austrian printmaker Eleonore Doelter. 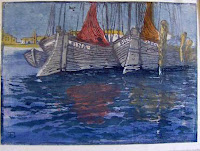 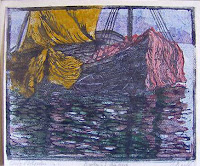 Both prints by Eleonore Doelter
She obviously has been Thiemann’s student in Dachau, probably travelling with or meeting him in Italy, their Chioggia prints appearing in the same years. I discovered this information in some recent auction and gallery catalogues (see below) leading me further to some more Austrian and German biographical facts. 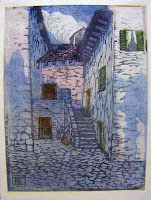 Comparing some of the pupils trials, like these trees, with the masters prints (lower) the influence of Thiemann is very overwhelmingly obvious. 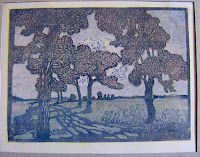 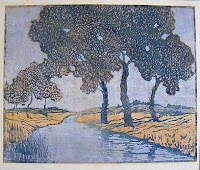 Eleonore married in 1876 Cornelio August Doelter (y Cisterich) (born 1850 in Arroyo Puerto Rico- died 1930 Vienna). His father August originated from Baden, emigrated and made his fortune marrying a sugar plantation and slave owner’s daughter in Puerto Rico in the West Indies and establishing a trading company. The father stayed in Puerto Rico sending his family home, first to Paris later to Germany. 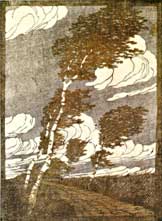 left Doelter, right Thiemann.
Young Cornelio studied mineralogy in Heidelberg and was appointed professor of mineralogy in Graz at the age of 27 the same year he married Eleonore Fötterle, daughter of Franz Fötterle an Austrian mining inspector and his wife Aloisia Radda. They Doelter family lived in a villa in a very posh neighbourhood in Graz near the wonderful Botanical Gardens and greenhouses. 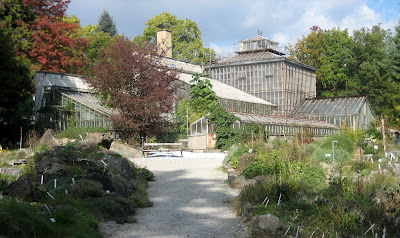 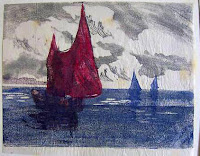 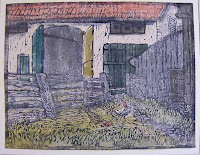 It was said Eleonore followed her artistic ambitions only later in life, after their two children, a daughter (1880) and a son (1882), had grown up. She studied with painters like Alfred Zoff (1852-1927) in Graz and Adolph Hoelzel in Dachau (whom we've met in before postings) and then worked with and no doubt learned the technique from printmaker Carl Thiemann in Dachau. 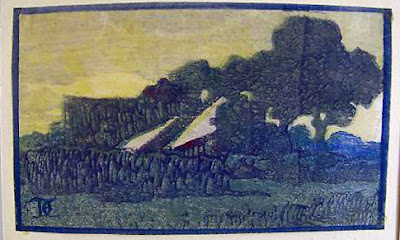 All these men were of her own generation and age and she had been in Dachau from 1905 (well before Thiemann arrived) exhibiting her colour woodblock prints extensively for several years after. After living separated for a long time the marriage was dissolved in 1915 and the professor remarried in 1919. 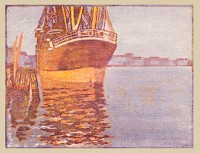 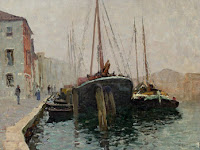 Left print by Doelter, right painting by Zoff.
Alfred Zoff, the Graz painting professor, proved to be a very interesting character and painter. I think I will return to him one day. Destined to become a doctor, like his father, he changed his mind and destiny following instead the Landes Kunstschule in Graz and becoming one of Austria’s most loved painters. In 1895 Zoff and his wife rented a villa on the Ligurian Mediteranean coast, near Genua, he’d discovered on his visits and walks earlier. There he entertained and lead painting classes with friends and students. Eleonore most probably was one of them. 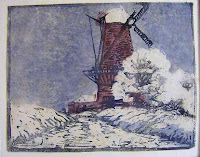 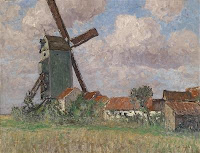 Zoff visited and painted in Belgium and the Netherlands too, and I think Eleonore might have accompanied him there also. 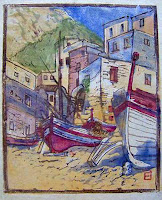 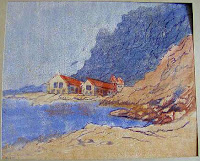 I have no idea about the chronology of her prints, there's never a date and   most of her prints have the same somewhat simplistic approach to every day scenery, the coast, dwellings, boats and I even found two flower pieces among the 40 or so examples. And there's the consistency in the use of color. Much like her colleagues from Suisse Martha Cunz (1876-1961) and Austria Josephine Siccard-Redl (1878-1938) 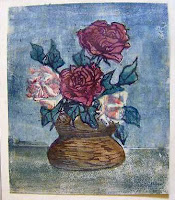 This winter landscape however, might be the proof of what she eventually  was capable of creating with the medium: my favorite. If I only had known a year back what I know now I maybe even might have owned one. 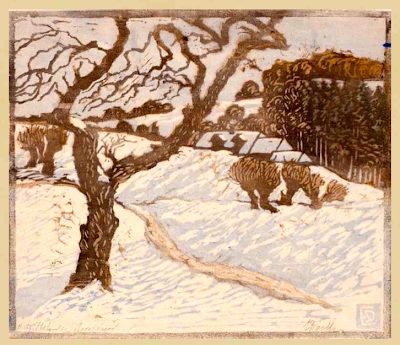 See Modern Printmakers for more Venice fishing boats prints by various other artists visiting the Venice lagoon here*.
With thanks: http://galerie-walfischgasse.com/  A visit to their 2012 catalogue is highly recommended.