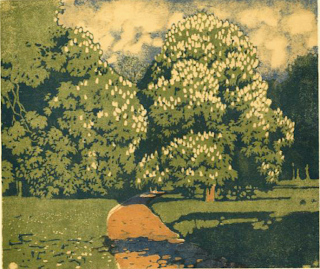 This picture, of flowering chestnuts (blühende Kastaniën), which can be found in several locations (and in Modern Printmakers here*) for quite some time annoyed me, causing doubt, questions and controversy about who actually created it. It was contributed to Carl Thiemann, "closely resembling the style of Hélène Mass" and vice-versa. It is most certainly the same example used in all sites and in some examples remnants of printed lettering in the lower margin are still visible. 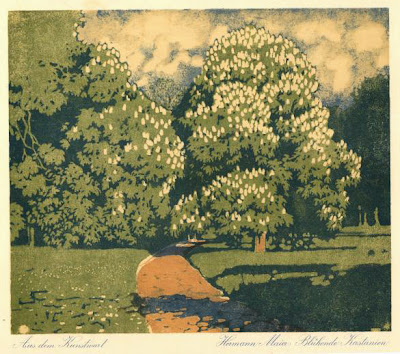 Somewhere, sometime, some-one has removed this information probably because it made no sense. A printmaker by the name of Hermann Maier just didn't exist. To this day, reading the signature of Hélène Maß, is troublesome and often is read as Helen Mayo or other variations, the double ss or ß in "Fraktur" (machinetype) or "Sütterlin" (written) old-Germanic scrypt difficult to read 100 years later and not only for non-Germans and Ebay sellers! It's why I happened to find mine (next posting). Compare how she treated the trees' shadows ! 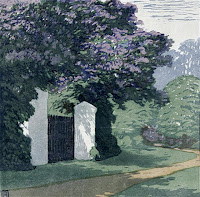 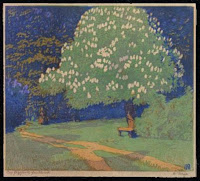 The editor of der Kunstwart/Kulturwart is also to blaim of course printing this phantasy name. And he did it again in 1919 and 1920 because there can hardly be any doubt these two Hildesheim prints are also by Hélène Maß. One of them even bares her monogram, the M over the H, in the block. Prints like these were probably created exclusively, maybe even commissioned by the Magazine which had 13.000 subscribers in its days of glory.

This perticular magazine, meant to enhance the cultural education and knowledge of the German People, was in existence from 1887 to 1932. Ploughing through all volumes (explaining the pause in posting) took me days. Many contemporary artists of name and fame co-operated happily, probably also because of the advertising power of a good, widely read and spread magazine. Graphic Art in German translates Vervielfaltigende Kunst: multiplicable Art. The British equivalent: the Studio first published 1893. These magazines had a huge influence educating the people and cleverly creating " good taste" and an appetite in a new public and market in the Art Deco and Arts and Craft period.

To make sensible decisions in the many offers (Ebay) it's evident some knowledge about the "Kunst-beilagen" of magazines like der Kunstwart, die Grafische Kunste (1879-1943), Jugend (1890's-1930) and PAN (1896-1900), and there were many more, will give you an advance in collecting prints when on a budget and safeguard you from disappointing acquisitions. Not every seller will tell you or, in the best case, may be just ignorant of what exactly he is selling and (asking/starting) prices vary immensely. From insanely overpriced to dead cheap. Recently I was able to add these Austrian parrots to my parrots on prints collection patiently awaiting an affordable offer from a realistic seller. Both are Kunstbeilage prints. Right Ludwig Jungnickel (1881-1965), left Angelo Jank (1868-1940) an iconic lithography by this animal painter 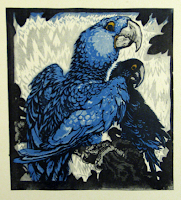 But mind you, most of these "Beilage"-prints today are very sought after, highly collectable and printed from the original blocks or plates in the case of etchings. Like the multiple prints by Ludwig Jungnickel (blue parrots, roe-deer), Norbertine Bresslern Roth (1891-1978)(orange lobster), Walter Klemm (1883-1957) (cattle market, blue-tits below a.o.), Eugen Kirchner (1865-1938) (print above), the great painter Max Liebermann (1847-1935) and the founding father of Modern Printmaking Emil Orlik (1870-1932) himself. 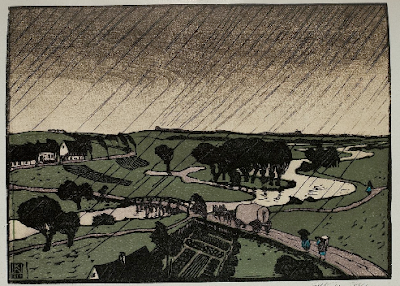 Walter Klemm in Japanese-Orlik mode, a free print in 1914 !

Many of these prints I cannot remember ever coming across in a hand-pulled or hand-signed edition. Later added (fake) signatures spoiling the value considerably.

Since I've found so many more nice and hardly ever seen pictures related to Hélène Maß and her times, facts about her and her contemporaries, the great German post-impressionist painters and the glorious city of Berlin its schools and many fine artists, I intend presenting them in following series of postings around Hélène Maß. Sharing and warming from the result of some winter armchair travel and research. 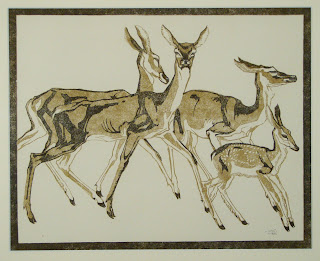 Read further here about Hélène Maß and her prints:

All pictures borrowed freely from the internet for friendly, educational and non commercial use.