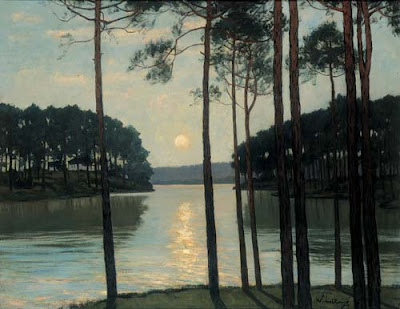 The Schlachtensee near Berlin as portrayed above combines a sense of rest and peacefulness with melancholia; the darkness of the forest and the glimmering reflection of the last rays of the sun mingle to a quiet harmony. It was painted in 1895 by Walter Leistikow, one of the founding members of the Berlin Secession. 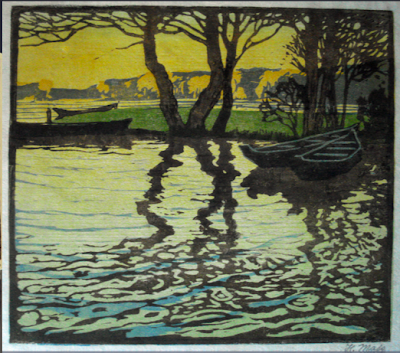 All this could also be said of this woodblock print by Hélène Maß, considered by some her best, which is obviously a tribute, an homage in color and atmosphere, to her painting teacher. 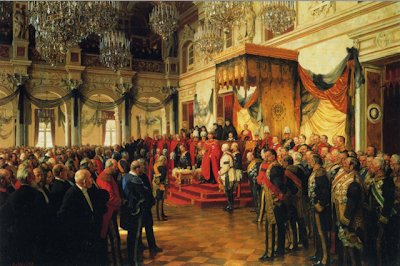 At age 18 Leistikow left Danzigerstrasse 27 Bromberg (near Posen/Poznan) and arrived by train in Berlin only to find himself dismissed from the government-run Berlin Academy for “lack of talent” shortly after by influential professor  Anton von Werner (1843-1915) who was a painter of pompous and historic events. What bad luck and sharper contrast to the young man who was so sensitive and contrary in nature and ambition. 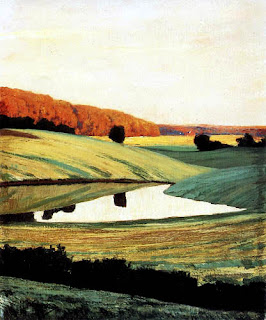 The apothekers son who had dreamed of his heroes Adolph Menzel (1815-1905) and Franz Skarbina (1849-1910) becoming himself a great painter was lovingly taught by his mother the first principles of drawing and painting recognizing her sons talent. Skarbina, who also taught at the Academy, later also met the scorn of von Werner, creating yet another Berlin Secessionist. 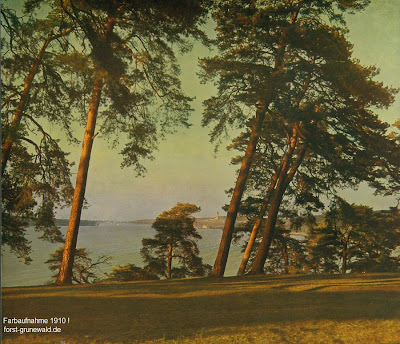 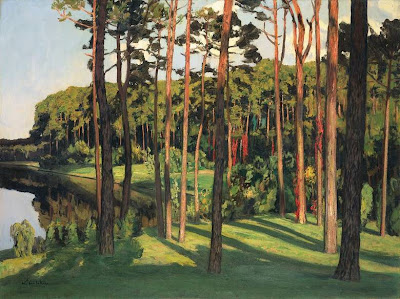 Lake Grünewald, actual 1910 color photograph and one of the 100's of "Märke Landschaft" paintings by Walter Leistikow.

Toward the end of the 19th century and early 20th century, Secessionist movements sprang up all over Europe. Their goal was to cast off the stifling corset of the reigning conservative academic style, which prescribed classic shapes and idealized scenes. In Berlin, the academic style was strongly connected to the wishes of Emperor Wilhelm II. Wilhelm saw art as a means of glorifying German history and was abhorred by non-academic works, which he deemed anti-German and potentially disruptive. He made sure they were excluded from the “Salons,” where art was shown and sold. The foundation of the Berlin Secession in 1898 put an end to this political kidnapping of the arts. 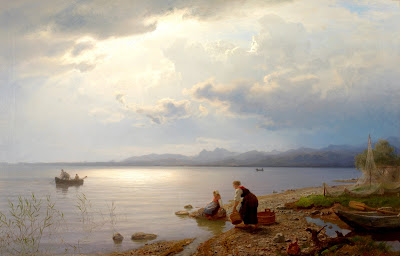 Unfazed Leistikow took private lessons at first with Hermann Eschke (1823-1910) and later (1885-1887) with the important Norwegian landscape painter Hans Fredrik Gude (1825-1903), above, who happened to be good friend of von Werner and ran a private school in Berlin, developing his own style over time. Proofing hard work and determination, and the right mentor, can compensate a "lack of talent". 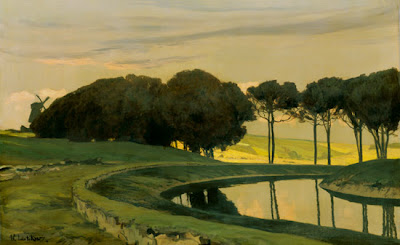 Lesitikow, eventually abandoned the common practice of adding staffage (human or animal figures) to his landscapes, focusing instead on their own intrinsic strength. His work seems to have a "Scandinavian feel" (no wonder)  to it, in terms of tonality and prolonged lines, but also in its sense of loneliness and austere beauty. This might be explained by his lessons by Gude but also from his love for Japanese prints. 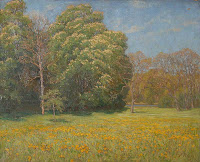 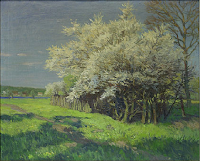 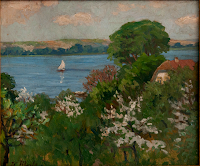 In 1890 Leistikow was appointed professor in Berlins Arts and Craft school, the most likely place to have met Hélène Mass who originated from Schönlanke, also from the Posen/Poznan region. The above 4 oil paintings are by Maß. Leistikow designed stained glass, wall papers, linoleum, tapestry and all kind of applied art becoming the first and most important Berlin Jugendstill artist. 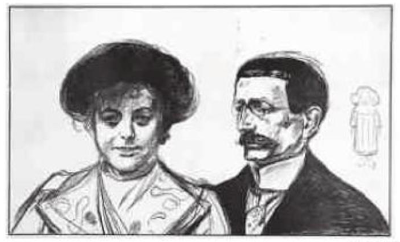 Leistikow, in the middle of the bustling Berlin art scene, the Academies, art schools, the modernists, (post)-impressionists, fauvists and emerging expressionists also became befriended with Edvard Munch (1863-1944) during his stay in Berlin. In 1894 he married the Danish poet Anna Mohr and they were portraited by Munch. In 1896 daughter Gerda was born. 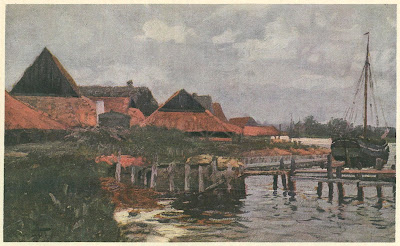 Traveling through the Nordic countries, upon his return, he appreciated the lakes and forests of Mark Brandenburg, the area surrounding Berlin, with renewed passion. His style of painting, I’ve learned, was described as the light and colors of Scandinavia superimposed on the Brandenburg landscape. He travelled frequently to Kopenhagen probably passing Eckersförde on the way and painting the local brick factory (above, a study, the original probably lost). 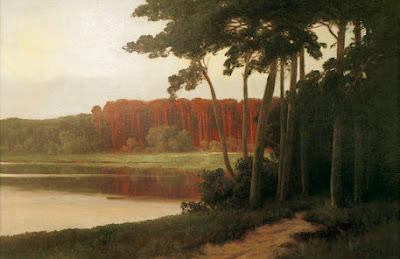 In 1901 he persuaded Lovis Corinth (1858-1925) to come over from Münich to Berlin resulting in Corinth taking took over his studio-house turning it into a painting school for Women (and marrying his first student). This could also be the place were Hélène Maß received painting lessons. Corinth, and more particularly his later flower paintings were an inspiration to that other great Leipzig and later Berlin based painter printmaker Else Schmiedeberg-Blume (1867 -after 1927) I discovered just recently (and will show later). She was a member  (like Maß) and  even head of the Drawing and Painting school of the Berlin Artist Women Association est. 1867. 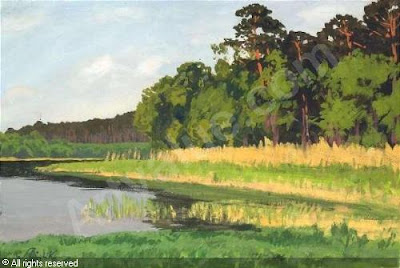 In hindsight, the moody atmosphere of the Schlachtensee forest which he created proved eerily befitting: having suffered from third-stage syphilis for years, it was here that he shot himself. The beloved lake would be the scene of Leistikow’s last moments on earth. 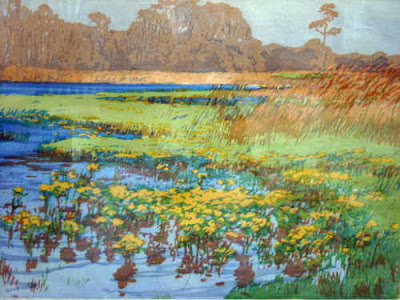 It is this similar use of light and color, the same choice of locations we find in maybe not Maß' paintings (the few I know of) but do in her landscape prints. But I doubt she created woodblock prints, like the one above, before 1908, the year Leistikow decided ending his life.

To be continued soon with some more pieces of the great puzzle.